Sharks are majestic, tough and insanely powerful creatures, but they've earned a pretty bad rap over the years. The infamous fish starred in many a news headline this past year especially; we always seem to be in awe of their gargantuan sizes, cringing at the most recent attack on a human, or treating them pretty darn horribly.

But we think sharks are generally misunderstood. The truth is, your chances of actually getting attacked by a shark are slim. You're more likely to die from falling into a hole in the sand or being attacked by a dog. But with the media shark frenzy (which we'll admit, we're guilty of, too), we understand why the average beach-goer can't help but subconsciously cue eerie music when wading in deep waters (dun dun, dun dun, dun dun...).

Just in case you find yourself in the extremely unlikely circumstance of being in the water with a shark looming nearby, here are five things you should absolutely never do, as recommended by the shark experts themselves.

Resisting the urge to panic can be difficult when a toothy apex predator is approaching, but it could mean the difference between life and death. "When most people see a shark, they freak," said Jim Howe, Hawaii's ocean safety chief of operations, but their panicked movements have been known to draw the shark even closer.

"[When a shark approaches], nine times out of ten, they'll just kind of leave you alone," Howe told The Huffington Post. "Many, many, many experienced divers and ocean people have had interactions where the sharks come in and take a real good look at them, and just swim away."

It is equally important to know when a shark is being aggressive or just curious. According to the Florida Museum of Natural History's International Shark Attack File (ISAF), a shark is acting overtly aggressive if it is "making rushes at you, hunching its back, lowering its pectoral (paired side) fins, swimming in a rapid zigzag course, or swimming with rapid up and down movements (sometimes rubbing its belly on the bottom)."

"If it looks aggressive," Howe said, "you'll want to defend yourself." The most common recommendation is to hit the shark with your fists or preferably with any available equipment. Howe recommends hitting the shark's eyes, while ISAF says aiming for the tip of the nose is the best strategy.

2. Don't try to escape by swimming and splashing away furiously

We don't blame you if this is your first instinct when a shark pays a surprise visit, but they are extremely good swimmers. They can and probably will out-swim you.

"An attack is more likely to occur if a person is scrambling back to shore," Howe, who has decades of experience with ocean rescues and sharks, warned. The rapid splashing of your arms and feet looks more like a fish in distress to a shark, making the shark even more curious and apt for a test bite.

The best way to exit the water, according to Howe, is to swim slowly and methodically while always keeping your eye on the shark. For inexperienced swimmers, he suggests moving through the water using only the arms instead of kicking the feet.

Again, your escape strategy should change if you're encountering an aggressive shark. At that point, defending yourself should become your number one priority.

3. Don't turn your back to the shark

In the video above, you'll notice that the diver, Jason Dimitri, chose to slowly make his way to the surface while facing the shark the entire time. Once the shark became more aggressive, he was able to see it approaching and defend himself appropriately. Had his back been turned the other way, Dimitri may not have been able to react as quickly.

"One of the things that a lot of people don't realize is that in the vast majority of shark attacks, [the victim] didn't know the attack was going to occur," explained Dr. Kim Holland, lead researcher with the HIMB Shark Research Group."Being aware that the shark is there and staying away from it, that can do a lot." 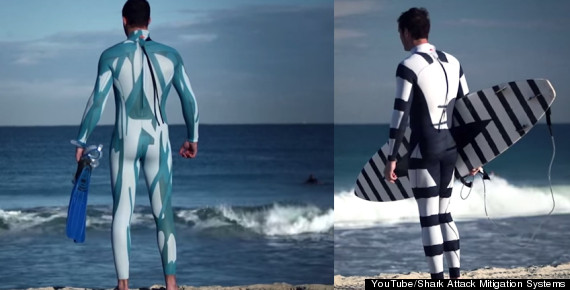 As society's fear of sharks continues to rise, so do sales in products marketed as shark repellents. One such wetsuit brand claims to disguise the wearer as an "unpalatable or dangerous food option" by using stripes similar to a sea snake's or by camouflaging them with the colors of the ocean. Another product claims to keep sharks away using electronic pulses.

But none of these products, Dr. Holland warned, can guarantee that a shark will not attack you. "Sharks eat other sharks and fishes for a living, much more so than [eating] humans," he said. "And those other fishes are blue and silver and other colors ... Somebody apparently thinks sea snakes are scary or obnoxious to sharks, but ... we know that in parts of the world where sea snakes are fairly common, they're found in the stomach contents of tiger sharks."

Dr. Holland and his research team have worked for years testing different shark repellent products and have even conducted their own search for an electricity-based deterrent or specific color that could be turned into such a device. None of those efforts have yielded successful results.

"There is no color or device that I'm aware of that has been scientifically tested in vaguely life-like situations that will reliably stop a shark attack," he said. The bottom line? No amount of money will make you invisible or invincible to a shark attack. 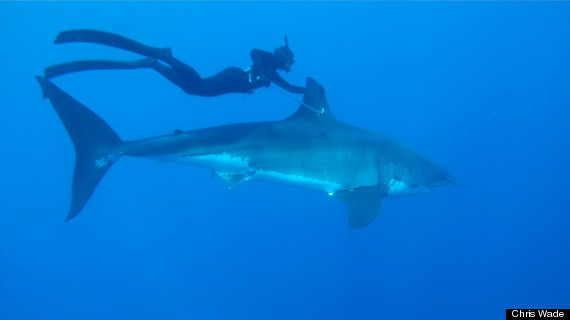 Unless you're an experienced professional or your name is Kimi Werner (pictured above), touching, riding or forcing any type of unnatural interaction with a shark should be completely off limits. The growing number of videos featuring shark and human interactions can give the average swimmer the false impression that sharks can be easily approached.

But even the most experienced divers consider the huge risk factor when approaching a shark and only do so after making an educated assessment. In the short film "Variables," Werner explained her decision to swim alongside a great white shark: "All of my years of hunting taught me how to read a fish's body language," she said. "The way that she was moving, the way that her fins were out, all of it showed me that she wasn't looking at me like prey."

More importantly, Werner and her dive partner never intended to 'ride' the fish, saying that the interaction happened naturally. Werner completely understood the risk she was taking. "I know she could've eaten me at any second had she wanted to," she said in the video.

While finding a shark in the wild can be frightening, Howe says it's important to realize how valuable that moment can be.

"If you are fortunate enough to see a shark while you’re surfing or swimming or diving," Howe insisted, "realize that people pay huge amounts of money to see wild animals in their natural environment. You're actually, in a lot of ways, very fortunate because you’re seeing an apex predator in its natural environment. Enjoy the ride, enjoy the moment. You’re getting to see something very few people get to see."

25 Ways To Avoid A Shark Attack