Those of us who get migraine headaches know the unique suffering an attack can bring: excruciating pain, sometimes along with light and noise sensitivity, and even nausea or vomiting. And when well-meaning friends and loved ones offer support or advice, it's often clear that they just don't get it.

And if you don't get migraine attacks, chances are you know someone who does (more than 10 percent of the U.S. population experiences them) and have struggled to find the right words to provide comfort. 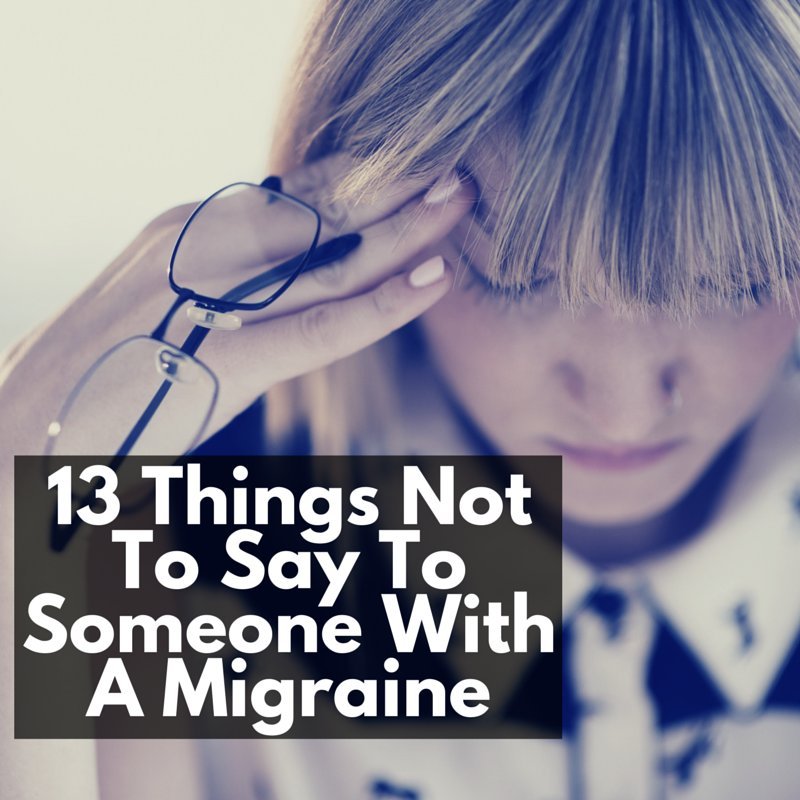 "People try to say these 'helpful' things that just drive people crazy. And the funny thing is you hear the same things over and over," says Dawn Buse, Ph.D., a clinical health psychologist and director of behavioral medicine at Montefiore Headache Center in New York. "Generally they're saying these things because they want to help, [but] it often comes off sounding uncaring or flippant or [like] they just don't get it."

To save everyone from the additional, er, headache, we asked our Twitter and Facebook communities, along with Buse and Jason Rosenberg, M.D., director of the Johns Hopkins Headache Center in Maryland (and a migraineur himself), for their least favorite comments about migraine headaches.

Almost everyone has had a headache. And while a migraine is a type of headache, it's an entirely different beast than your typical tension-type pain. Migraine is a neurological disease and attacks can last four to 72 hours with sometimes severe pain that can be accompanied by other uncomfortable symptoms, including nausea, vomiting and light and noise sensitivity. "It's long and it's really debilitating and so it's different than a tension-type headache," Buse says.

In fact, as much as 80 percent of the adult U.S. population suffers from occasional tension headaches, while only about 12 percent of the population get migraine headaches (and 2 percent have chronic migraine, meaning attacks occur more than 15 days a month). "Just saying that you get a headache doesn't even scratch the surface," Rosenberg says.

"Move around, you'll feel better." (Or, "Do something to take your mind off of it.")

The "perverse nature" of migraine, Rosenberg says, is that while distraction can help ease other types of pain (think about a stubbed toe that you don't notice is throbbing until the end of the day when you're not busy), it doesn't work for migraine. "Physical activity tends to make it worse," he says.

While there's some evidence that physical activity can help to prevent a migraine, in the throes of an attack most prefer to rest in a dark room, according to Buse, especially because of the associated symptoms such as nausea and light sensitivity. What's more, many people are wiped out after the whole ordeal, and might not feel back to normal for a few hours or even days. "If someone hasn't experienced a migraine, they may not understand the severe pain and associated symptoms. It's very hard to focus on anything else," Buse says. Things that can help? Relaxing visual imagery or soothing music. She recommends asking a friend or loved one if he feels up to doing something pleasant or distracting -- though be prepared for him to say no.

Eating chocolate. Drinking alcohol. Eating gluten. You can fill in the blank with any number of well-meaning suggestions. "Everybody has their own beliefs as to what triggers an individual migraine but it's really bad luck more than anything," Rosenberg says. "It's a combination of genetics and other factors that are largely out of our control."

While many migraineurs find it's helpful to track their personal triggers, it's important to remember that migraine is a biological condition, Buse says. And chances are, someone who's suffering attacks is already working to pinpoint possible triggers. "People don't have to tell you, you already know your body and your brain," Buse says.

Migraine is an "invisible illness," according to Buse, which can be confusing when someone looks the same during an attack as she does without one. "You can give a compliment and say you look nice today, but it's important not to negate that someone's illness is real," Buse says. It's better to ask someone how she's feeling rather than assume based on her outside appearance.

Well, migraine attacks are literally in the head -- but they're not a figment of the imagination. "This is a biologic condition that involves the brain and brain structure and neurotransmitters and is quite complex," Buse says. "When people say these things, it's just dismissive and trivializing. It makes people feel unheard and not validated and not respected."

In reality, the World Health Organization has classified severe migraine in the same disability severity group as quadriplegia and terminal stage cancer. "Migraine is more than just pain," Rosenberg says. "There's a lot more to it than what people think of for, 'Oh it's just a headache.'"

While dehydration might trigger a migraine, it's not going to help once a headache is in progress. "Drinking water is not going to get rid of a migraine that you already have," Rosenberg says. What's worse, he adds, you might be too nauseated to drink.

Buse explains that while things like drinking enough water, getting plenty of sleep, eating healthy foods and exercising are all helpful pre-attack, migraine is still a biologic condition. "It may help reduce the frequency of attacks," she says, "but it doesn't stop someone from having the condition of migraine."

"There's something about the experience of a headache that makes people feel like they can participate in your care with some knowledge," Rosenberg says. "You don't hear people doing that for other chronic illnesses."

While sharing tips and information can be helpful, they're likely not going to do much to help while a person is in pain. "By the time they're visibly suffering, they've probably tried any number of things," he adds. And being an "armchair quarterback" can often be more annoying than helpful.

"At least they can't kill you."

While Rosenberg points out that he does see conditions in his practice that are "worse," migraine can cause people to lose jobs, drop out of school, lose income and even lose spouses. "I've seen divorces caused by headaches," he says. "They affect the entire family."

"Are you still getting migraines?"

See also: "It will get better, just be patient."

"Migraine is a chronic condition which may last for decades or the entire course of one’s life," Buse says. Frequency and severity might fluctuate over time, whether it's because of hormone changes (such as pregnancy or birth control use), stressful life events and other medical conditions and migraine does tend to improve over the course of a lifespan, but it can be different for everyone. Plus, "telling a teenage girl that she may feel better after she goes through menopause does not tend to make her feel better," she says.

"I wish I could stay at home all the time like you do."

"This makes someone really feel misunderstood ... Living with a chronic illness or invisible illness or pain condition like migraine is really tough and not a fun or relaxing or pleasant way to live at all. So when someone says that it just makes the person feel very unheard, unrecognized, misunderstood," Buse says. "People who have migraine and are missing out on life dearly wish that they could be out experiencing life, spending time with loved ones and working. I hear this all the time in practice."

The old-fashioned (thoroughly debunked) stigma of a "migraine personality" suggested that it mostly afflicted neurotic women or high-achieving men, according to Rosenberg. "There's still this idea that there's this sign of weakness or weakness of will," he says. "Yes stress can set off many things, but [migraine has] nothing to do with your ability to handle it."

In other words, stress (as well as the letdown after stress) may trigger an attack, but that doesn't mean a migraineur is any better or worse at handling stress compared to someone without a diagnosis. And it's a trigger for attacks, not the reason for the condition itself.

"Isn't that a female thing?"

While it's true that migraine is three times more common in women than men, 6 percent of men have the condition.

"Maybe it's your sinuses."

Chances are it's not. "There are of course exceptions to all rules, but as a rule sinuses don't cause headaches that don't go away," Rosenberg says. While a sinus infection can cause pressure and pain in the head, it typically comes with other symptoms, such as a stuffy or runny nose.

In fact, WebMD reports that four out of five people who think they have a sinus headache actually have migraine headaches. "If you walk into your doctor's office with disabling headache pain that comes and goes, 95 percent of the time it's migraine," Stephen Silberstein, M.D., a neurology professor at Thomas Jefferson University told the publication. "People with sinus infections don't complain of headache first. They say they are sick and have a headache."