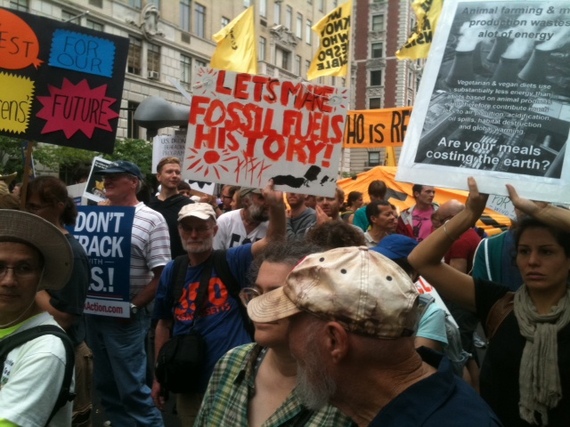 Have you ever wondered what choices you would have made during great upheavals of the past? I like to believe that I would have been a suffragette -- though not one who got thrown in jail and went on hunger strikes. I also hope I would have been an abolitionist. Again, not of the Harriet Tubman caliber; I'm more of a supporting player, the kind who offered hiding spaces for escaping slaves. Possibly I would have decried Abraham Lincoln for taking too long to abolish slavery.

No need to mull over this question any longer. Contemporary crises provide plenty of opportunity to be heroic in fact, not just daydreams. We seem to be engaged in a mighty struggle between the forces of light, hope, progress, love -- even our very survival as a species -- against the forces of darkness, anger, and a desperation to perpetuate broken systems which are killing us. I, for one, wish to win this battle -- which means actively engaging in the struggle, like the suffragettes and abolitionists before us.

Obviously, we're in for one helluva ride. From mass shootings to despicable and deadly racism to unspeakable income inequality to the fossil fuel industry fighting for their profits despite the death and destruction that means for current and future generations -- in the United States alone, the challenges are breathtaking. To prevail -- and losing is really not an option -- we must be tough in our love, strong in our hope and determination, creative, compassionate, resilient, and optimistic. In other words, we must be happy, as peculiar as that may sound. We need to be our best.

Clearly, we won't be walking around with smiley faces all the time. The night of the San Bernadino massacre, I couldn't figure out how to respond to a friend's despairing Facebook post. Sometimes it's too dark to see.

The next morning, though, the mandate was clear: For both collective and individual well being, we must cultivate optimism (which is a learned trait, not genetically pre-determined) and take action. The two really go hand-in-hand -- as does happiness. Happier people are more optimistic and active, and optimistic people are happier and take action.

Abraham Lincoln, it turns out, is an inspiring role model. Doris Kearns Godwin's amazing book Team of Rivals: The Political Genius of Abram Lincoln portrays a president who was fairly happy, despite his own and the country's intense suffering. He was also deeply optimistic with an admirable capacity to learn from failure and loss and move forward -- to the great and lasting benefit of humankind.

Optimism helps us appreciate that crises are also opportunities. Visionaries like Naomi Klein, Vandana Shiva, and Paul Gilding all point toward the possibility of a much better future on the other side of what will undoubtedly be an unimaginably costly upheaval. Still, Klein writes in This Changes Everything, the needed transformations "would get to the root of why we are facing serial crises in the first place, and would leave us with both a more habitable climate than the one we are headed for and a far more just economy than the one we have right now."

Despair leads to paralysis. We simply must be hopeful -- and that's not delusional. As Howard Zinn says, "To be hopeful in bad times is based on the fact that human history is not only of cruelty, but also of compassion, sacrifice, courage, kindness. If we see only the worst, it destroys our capacity to do something. If we remember those times and places where people have behaved magnificently, this gives us the energy to act."

There's a very important caveat: Optimism needs to be grounded and realistic. Admiral James Stockdale, the highest ranking naval officer to be held prisoner during the Vietnam War, observed that the POWs most likely to survive that experience were those with reality-based optimism. Stockdale said, "You must never confuse faith that you will prevail in the end -- which you cannot afford to lose -- with the discipline to confront the most brutal facts of your current reality, whatever they may be."

Although necessary, faith is insufficient. Saving the planet is not a spectator sport -- we have to do something, anything, many things. I, for one, am taking a bus to join the massive "Jobs, Justice, and Climate" rally in Boston on Dec. 12. I won't get home from the rally in time for one of my community's traditional holiday parties, but, hello? What would Harriet Tubman have done? Or Elizabeth Cady Stanton? Plus, I expect the event to be full of joy.

Joyful, and totally serious. No one should ever conflate non-violent protest -- no matter how creative or playful -- with a lack of grit or determination. Still, what can you do? The options are endless. Take a look at this awe-inspiring list of 198 methods of non-violent action by the brilliant Gene Sharp. There are so many more ways to get involved. Here are some other examples:

· Contribute to legal defense funds;
· Put a "Black Lives Matter" sign in your front lawn;
· Host a refugee family;
· Show up in support of the front line protesters;
· Feed people. We can all do this work better with full stomachs!

Whatever you do, please be kind. There is enough hatred in the world already. Be determined, yes, and tough -- but compassionate. Way easier said than done, I know -- but here, too, Abraham Lincoln can help us. Team of Rivals describes a deeply empathetic human being. He refused to be drawn into hate speech, and had a heart full of forgiveness. He understood that each of us is imperfect, and a product of our own times and places. Lincoln remains a beacon of hope -- along with millions of very alive and lively environmental, economic, and social justice activists worldwide. They -- and we -- are the heroes we've been waiting for.