Barack Obama will take office facing economic collapse and wars in both Iraq and Afghanistan - a situation which could present him with an opportunity to build a revived Democratic coalition or foil his attempts to restore a durable center-left majority.

Obama appears to be acutely aware of what is in store for him. The challenges are "the greatest of a lifetime," he told thousands of supporters gathered in Chicago's Grant Park Tuesday night, "two wars, a planet in peril, the worst financial crisis in a century."

Working to Obama's advantage is that his victory is part of an ongoing Democratic surge that began in 2006 and moved powerfully forward on Tuesday. "This was a broad-based victory that pulled in a slew of new Democratic Senators, and Democratic House members. Millions of new voters--especially the young and minorities--were brought into the system. These are the prerequisite conditions for the possibility of a sustained Democratic majority," University of Virginia political scientist Larry Sabato pointed out to the Huffington Post.

The potential for Democratic revival was demonstrated by extraordinary fundraising success - much of it fueled by online contributions: this year's election marked the first time in recent memory that the Democratic president candidate and the Democratic National Committee raised and spent substantially more money than their GOP counterparts. In 2004, total spending by Kerry and Bush and their respective party committees was roughly equal. This year, Obama and the DNC spent a total of almost $750 million, while McCain and the RNC spent about $450 million.

At the same time that Obama set records in collecting campaign contributions, his coalition is, in fact, marked by a lack of internal economic cohesion: his supporters are bifurcated, with one wing made up of heavily minority 'downscale' voters, and the other wing composed of mostly white, relatively affluent, well-educated, socially liberal 'knowledge workers' or professionals.

The following chart shows the extent to which Obama prevailed among both the least-educated and the very-well-educated:

This chart demonstrates the extent to which Obama did best among the poor, at one extreme, and the most affluent, at the other, while performing less well in the middle and upper-middle classes: 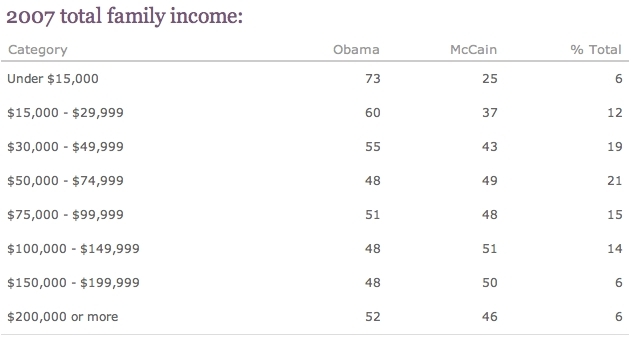 At another level, election results suggest that regional differences -- the social and racial conservatism of parts of the South, for example, and the cultural liberalization of parts of the West -- may be intensifying.

MIT political scientist Charles Stewart found that there has been "an obvious reshuffling of support for the parties geographically....In much of the South it's looking as if McCain did no worse than Bush in '04, and he may have done better. At this writing, for instance, McCain did better than Bush in Louisiana, Tennessee, and Arkansas. It's the west where Obama really picked up support. Obama was up 10% (compared to Kerry) in Utah and Montana, and 8% better in Nebraska and Nevada."

SLIDESHOW: Election Reactions Around The Country

Nate Silver, who runs the 538 Web site, notes that blacks sharply increased their political participation. "African-American turnout share increased from 11 percent to 13 percent. That doesn't sound like much, but it's about a 20 percent jump among a population that already did turn out in pretty decent numbers. Turnout among registered black voters must have been near universal."

Even as black turnout was up, a number of analysts found that there was no "Bradley effect." Columbia political scientist David Epstein studied the election results for evidence that Obama might have pulled fewer votes than polls predicted, and found "The answer is: nada....In the states where the last polls had Obama within 10% of McCain, in either direction, Obama actually outperformed his polling by about 0.5%."

University of North Carolina political scientist James Stimson argues that while race prejudice on the part of whites may persist, it is no longer determinative:

"I think the conclusion we have to reach, because the data permit no other, is that many millions of racially prejudiced white voters voted for Barack Obama. I believe that the dichotomy we have maintained throughout this campaign, that America was either a post-racial nation if it elected Obama, or that Obama was bound to be doomed by white racist voters, was always false. I think many millions were and are racially prejudiced, but that prejudice was not strong enough to overcome the plain facts of who and what Barack Obama was. After all you can believe in racial stereotypes and still see that this extraordinarily competent man was an exception to them all. It may in the end be too unkind to call such voters racist, because voting for a black man to be president of the United States is no small thing. But I don't think we are yet beyond substantial racial prejudice." SLIDESHOW: Obama's Victory On Newspaper Front Pages

Obama's 67-31 margin among Hispanics was far better than Kerry's 53-44. Similarly, Obama won voters under the age of 30 by better than two to one, 66-32, far better than Kerry's 54-45, according to exit polls. Both groups are key to future victories - the young because the party chosen early in life often becomes a permanent commitment, and Latinos because they are the fastest growing minority and a crucial constituency in the battleground states of the mountain west, in Florida, and, in coming years, Texas.

If Obama is to institutionalize his coalition, there is widespread agreement that he must successfully intervene in and resolve the current economic turmoil -- that political success must be reinforced by substantive improvement in the lives of voters, or election day gains will evaporate.

Two Stanford political scientists, David Brady and Douglas Rivers, make the argument that Democratic gains could be tenuous because they are based, in part, on support from Republicans whose disenchantment with the GOP may prove temporary. On the other hand, they argue, to do better, the GOP will have to resolve conflicts between its socially conservative and socially moderate factions:

Part of Republicans' difficulties come from widespread dissatisfaction with the Bush administration and its handling of the economy and the war in Iraq. These are retrospective evaluations whose effects will tend to diminish over time. . . . But another cause of Republican troubles appears to be the ideological positioning of the Republican party, particularly on social issues. The positions that appeal to the Republican base are repelling moderates that the party needs to maintain its long-term competitiveness. These voters are not lost to Republicans--yet. Most consider themselves Independent or leaning or weak Republicans, not Democrats. They are not liberals and remain closer, on average, to Republican positions than those espoused by the Democrats. But they are up for grabs.

Steve Ansolabehere of Harvard has a compatible view:

The GOP might end up focusing excessively on its base: they don't have many moderates left in Congress, and it will take some real leadership to move them to the left in order to compete.

Nolan McCarty, Princeton political scientist, argues that the new Democratic majority, if it does not veer too far to the left, has a fighting chance:

I'm hesitant to predict a sustained Democratic majority.....If the economy improves and the Democrats don't overshoot to the left, they will be in very good shape in 2010 and beyond....Given that there are so few moderates/conservatives in the current Democratic caucus, it is easily the biggest liberal/progressive majority since the New Deal (maybe ever). Unlike the Democratic congresses under Johnson and Carter, the speaker and the chairs of important committees are all from the liberal wing of the party. So whether Obama can prevent a big overreach will be a big test of his leadership.

The election may have the magnitude of a realigning election, but its durability depends on what happens over the next several years," says Wayne Steger of DePaul. "There are a number of ifs. If the economic situation recovers and if the Democrats are able to enact policies that the public widely credits for that recovery (whether or not the policies are responsible), then there is a fair chance that the Democrats will gain the loyalties of a large number of voters on a more enduring basis.

James Stimson of the University of North Carolina believes that expectations of the kind of long term change associated with a realignment are sure to be frustrated:

I think everything is cyclical in American politics. The elections of 2006 and 2008 mark the beginning of a new cycle of openness to liberal initiatives. But no cycle is ever permanent. In due course, after 8 or 12 years, the electorate will be ready to return to the right.

There is a substantial body of thought among Democrats, however, that Obama's victory accurately reflects transformations in the demographic and attitudinal characteristics of voters. Because these transformations are rooted in the voters themselves, and not in political strategies, they are likely, from this perspective, to be enduring. One of the strongest proponents of this approach is Simon Rosenberg, head of the New Democrat Network.

When I was born in 1963 the country was almost 89 percent white, 10.5 percent African-American and less than 1 percent other. The racial construct of America was, and had been for over hundreds of years, a white-black, majority-minority construct, and for most of our history had been a pernicious and exploitive one," Rosenberg writes. "Today America is 66 percent white and 33 percent 'minority'.'' According to Rosenberg's assessment, Republican wedge issues will no longer work. "This strategy - welfare queens, Willie Horton, Reagan Democrats, tough on crime, an aggressive redistricting approach in 1990" will prove ineffective in "the new demographic realities of America.

Democratic party fortunes will reverse completely in 2012 if the party goes before the country presiding over a mess of comparable magnitude to present conditions. I see no durable shift favoring the Democrats." Instead, Hibbs makes the case that the current election and such past political shifts as Ronald Reagan's 1980 victory "were the predictable consequence of poor economic performance under the incumbent.

Hibbs argues that, according to his "Bread and Peace" model, "postwar American presidential elections.... are well explained by just two objectively measured fundamental determinants: (1) Weighted-average growth of per capita real disposable personal income over the term, and (2) Cumulative US military fatalities owing to unprovoked, hostile deployments of American armed forces in foreign wars." His model predicted the Obama victory.

The "how" of Obama's campaign and victory is potentially a turning point in the revitalization of American democracy. By fighting a tough-minded campaign that hit hard on progressive policy themes (not flinching on taxing the rich, for example) but refused to engage in personal smears, he has created the possibility of permanently sidelining the fear-mongering, polarizing, manipulative style of politics used by Republicans in recent times, a style also acquiesced to by many Democrats. The Obama campaign's determination to raise money broadly and to create an organized infrastructure for volunteers across virtually all of the states was a great gift to American civic democracy. He used U.S. federalism in an inclusive way -- characteristic of the best of our civic past while using new technologies. . . . The broadening of the media -- through internet news and commentary, and the emergence of sane liberal commentators -- was crucial to creating the space in which the Obama campaign grew and succeeded. That same reconfigured and broadened media will be important to foster constructive criticism and support for effective, cooperative governance going forward.