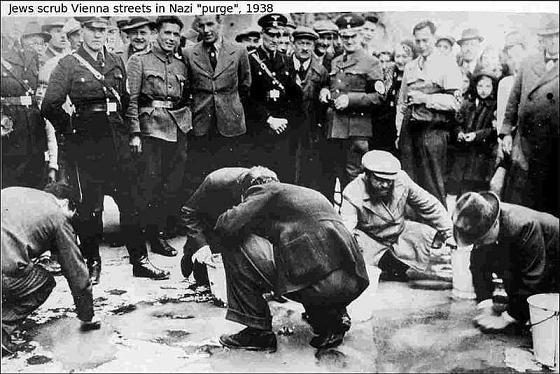 There are many ways to look at Jewish history, depending on the context and the message that the examination wishes to point out. But if you look at the history of Jew-hatred from the perspective of the haters rather than the Jews, a new concept emerges. From that perspective, not only is anti-Semitism the result of Jewish conduct, but its mitigation and even uprooting is entirely in their hands. To understand how this is possible, you need to travel back in time to the early days of Judaism as we know it.

After the ruin of the Temple, the exiled Jews began to disperse throughout the world. For the most part, a similar scenario unfolded in their host countries--they were welcomed first, hated next, and finally expelled or murdered. Greek historian, Flavius Josephus wrote that "the Jewish nation is widely dispersed over all the habitable earth [Syria and the Near and Middle East]... wherein the kings, after Antiochus, had afforded them a habitation with the most undisturbed tranquility."

Later on, they were expelled from there and fled to Europe. Particularly in Spain, the Jews were treated with such affection that a special term was used to describe their relations with the Christians: convivencia [roughly meaning, "living together in affinity"]. And yet, despite centuries of mutual fondness, in 1492 the verdict was cast to expel the Jews, or kill them if they did not convert to Christianity.

Similar scenarios unfolded throughout Europe, but the most stark evidence of this process is of course the collapse of the "convivencia" in Germany between Germans and German Jews, ending in the extermination of all but the entire European Jewry.

Jews have since returned to Europe, but clearly, the Europeans merely tolerate them, at best; there is no convivencia. And if we look at what is happening today in Western Europe, it is clear that anti-Semitism is rising there again, and there is no logical reason to expect it to end any differently than past intensifications of Jew-hatred.

The two "havens" that European Jews might seek are the US and Israel. But today, neither are safe. In the US, the similarities between the state of pre WWII German Jewry, and today's state of American Jewry are so obvious that you need to try very hard to overlook them in order to remain calm. But calm is not a good advice in the days of anti-Semitism.

As for Israel, if the UN general assembly were to be asked to vote on the establishment of the state of Israel today, there is not doubt that the result would be very different from that of the 1947 vote, and not in Israel's favor. When Israel was first established, it was the underdog, the victim fighting for its survival against six armies, and the world cheered when Israel won. Since 1967, all that has begun to change, and today the vast majority of UN member states would prefer that the state of Israel did not exist.

However, the similarity between pre war German Jewry and today's American Jewry does not necessarily entail similar fates. Likewise, Israel's similar like-dislike curve with respect to its international relations does not entail that the fate of the state of Israel will be the same as the fate of German Jewry. The deciding factor is not the rise of anti-Semitism itself, but the root cause that arouses and nurtures it.

We need to understand why there is anti-Semitism to begin with because despite numerous explanations, we have not figured out why it has endured for so many centuries, constantly wearing new attires, and most important, what can be done to finally uproot it.

First, at the risk of being labeled as clannish, I think we need to acknowledge one fact: Jews are not like other nations. The staggering disproportion between their minuscule percentage of world population, and their immense contribution to arts and culture, science, economy, and of course ethics and religion, is one evidence of that. The other evidence is the attention that nations of the world themselves give to Jews and Israel. From celebrities through army generals, to the UN, and throughout history, no other faith has gotten so much attention, the majority of which is negative. No other faith has been blamed of so many faults, by so many people and nations, and for so many centuries.

I therefore propose that we stop justifying ourselves for just a moment, and reflect on the situation from a different angle: that of the accusers. Clearly, all the abovementioned contributions do not impress the world. We do not hear any cheers for our contributions to economy, for example. We do, however, hear ample accusations that Jews are using their financial skills to manipulate and exploit other nations. We also do not receive acclaim for our contribution to technology, but rather constant admonition for using it to improve Israel's military capabilities.

That is, everyone agrees that loving others is a great idea but not one nation or religion can implement it. It turns out that we have given the world a gift that can make all people happy, but which they cannot use. If you were terminally ill, and someone gave you a locked box containing a cure that could save your life, but put away the key, how would you feel about that person? This is what the nations feel toward us. Subconsciously, they feel we have the key to solving the world's problems, and this is why they like us when we first settle in their country. But since we are inadvertently preventing it from them, they end up disliking us and the tide turns against us. This is when they begin to blame us for causing all the problems, because if you have the solution to a problem but are preventing it from everyone, then you are to blame for the existence and persistence of the problem.

The Jewish nation was founded on the principle of profound brotherly love. We did not become a nation until we pledged to unite "as one man with one heart." Following that commitment, we managed to maintain a thriving society through trials and tribulations by clinging to the motto, "love your neighbor as yourself."

While we were cultivating brotherly love, the rest of the world was learning how to extol and glorify the self. Finally, we, too, succumbed to the idea and fell into unfounded hatred, which we now call egoism. Because we lost our unity, we also lost our ability to maintain our sovereignty, and we were exiled and spread out throughout the world.

Since then, the world has grown increasingly self-centered. Today's self-centeredness is so intense it is becoming narcissism, fascism, and religious fundamentalism. Today even the most basic structure of human society, the family institute, is falling apart. The majority of families in Western countries are either single parent families or families where the children are biologically only the mother's or the father's because the parents have remarried. Moreover, an increasing number of adults choose to avoid having children altogether.

As intensifying extremism and spreading joblessness make maintaining social order harder each year, the need for a way to solidify society is becoming increasingly urgent. And the more frustrated nations and governments become, the more they will turn their anger against the Jews.

And it will not be because the Jews are scapegoats. It will be because Jews really do have the key, even if they are not aware of it. At some point, the like-dislike curve will turn against the Jews beyond the point of no return. This is when another devastation is likely to unfold.

Therefore, our only hope of escaping another ordeal is to reestablish the unity that they all seek, which we once held, and show how this is done by setting an example. The chasm lying among Jews should not deter us because it is only a ravine waiting to be bridged. We need not hide our disputes, but show how we overcome them by exercising brotherly love.

We may not feel such love between us at the moment, but as soon as we begin to cultivate it, the world's view of Jews in general, and the Jewish state in particular, will change and we will receive every encouragement to succeed. If we remember that we are not doing it for ourselves, but for the world, so that our globalized society may thrive and prosper, we will receive international support and worldwide acclaim.

We have the trait of unity latent in our nation's "genes." Our calling is to reactivate those genes and lead the way to unity for the good of all humankind.