A few weeks ago I was putting away our holiday cards, the majority of which were photo cards. Some were cute or funny, and others depicted the growing families of some of our closest friends. I wanted the kids to jump out of the card so I could hug them or teach them how to be great Scrabble players.

There was one in particular I just held in my hand and couldn't quite put away. It was a picture of a friend -- an accomplished academic and administrator at one of the top universities in the world -- and his husband and their two children. Two siblings -- one boy and one girl -- both of whom had come to live as foster kids with Jay and his husband, David. And before long, all four were gobsmacked with love, leading them to venture through the long and official process of becoming one big, happy adopted family -- for life. 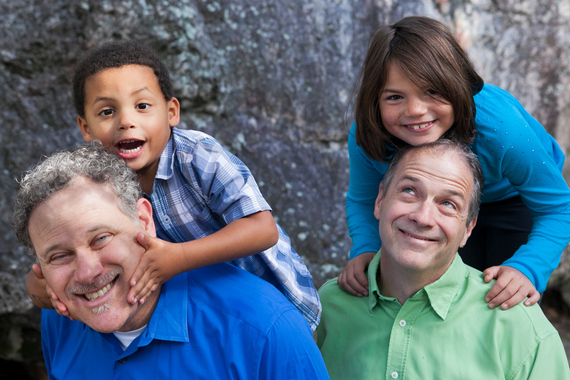 Jay Stowsky and David Kerr with their two children

As I looked at the card, I was struck by all the smiles, the fun, the silliness and the deep care seen by all four of them. There was something really special about this card, something way deeper than the rest. On the backside of the card were pictures of the kids with their grandparents and extended family members, as if they had always known each other. It was meant to be. It was one of the most joyful families I had ever seen. But there was something else that made me want to hold onto this card.

When I spoke to Jay, he said, 'Who would have thought after 50 that instead of thinking about retirement or at least wondering when I was going to take the pedal off the career accelerator, I would instead become a dad." We agreed that the kid chapter was simply the best chapter of our lives.

Yet for me, it was much more straightforward -- I mean, I was raised Catholic, for starters, married and pregnant by my mid-twenties. But the U.S. was a different place back then; even if Jay had wanted all those things, society and the law were not as favorable as they are becoming today. Two men getting married, let alone adopting kids, was simply unheard of.

And who were the big losers? I thought, as I kept staring at this card.

The kids, of course!

And the parents who had so much to give and get from hugging and, yes, even enforcing homework assignments.

But in the grand scheme of things, our communities and country in many ways had been the big losers. And how stupid was that. Almost 400,000 kids in the U.S. are without a permanent family. Globally, almost 18 million children live on the streets or in orphanages -- most of us would weep if our kids were confined to that life.

So, as we prepare our valentines and bake our cakes, as I hold the card a little longer, I think we should look around and ask ourselves: Who today are we not allowing into our hearts and our communities because of fear or uncertainty?

Because traditional families are evolving and, hopefully, only getting better.