One morning my teenage daughter emerged from her bedroom to ask, "Can you believe what happened in Syria yesterday?" Surprised (and pretty sure she hadn't secretly subscribed to the The New York Times), I got a bigger surprise when I learned where she'd picked up this news... "Snapchat."

If you're like most parents, you've probably been duly warned about this app. Best known as a social networking platform where users share photo and video messages that disappear almost immediately after being viewed, Snapchat quickly gained something of a reputation, fair or not, as a "sexting" app when it first launched in 2011. Personally, I was advised just recently to "delete this dangerous app from my teen's phone" (that's a direct quote from an Internet "expert" in my region). So hearing from my daughter that she was using the app to keep abreast of news (not her primary usage of Snapchat to be sure), only confirmed what I've long been thinking.

Snapchat is the app to watch. Here's why:

Believe it or not, Snapchat has been quietly (well, quietly to any of us over the age of 30 anyway) establishing itself as a legitimate journalistic force. It recently debuted its very own news show, called Good Luck America, putting the company's head of news, Peter Hamby (a former CNN correspondent), on the campaign trail in Iowa. The gamble seems to be paying off, according to a Snapchat spokesperson I spoke with, "Two times more young people between 18-24 watched the first GOP debate on Snapchat than on TV."

Snapchat also made a name for itself as something of a breaking news platform during the mass shooting in San Bernardino, California, this past December with a curated "story" (more about Snapchat stories in a minute) called "California Shooting." Made up of user-generated video and images, this live story provided its 100 million daily active users (yes you read that right) with updates and powerful imagery direct from the scene, even as traditional media outlets were still scrambling to cover the story.

The app seems to be invigorating citizen journalism by making it fun and easy for Snapchatters to share and watch the "news" they've stopped watching on TV. 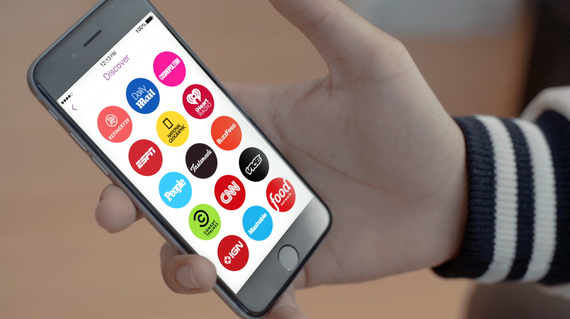 Last year, Snapchat launched something it calls "Discover." This functionality gives users content from a number of top media companies like The Wall Street Journal, Vice, BuzzFeed, ESPN, Food Network, National Geographic, Cosmopolitan, CNN, Daily Mail and more. Each of these companies is adapting its news to fit the Snapchat style, providing the app with short, snappy, fresh daily content (yes it disappears after a day), easily accessible through the tap of a round colorful icon.

Recently, for example, I opened the app and swiped once to find a screen full of news options. I chose to watch a short piece from The Wall Street Journal called, "Apple CEO Tim Cook's Dangerous Game." It was a visually pleasing combination of text and video delivered via a story that I found engaging, informative and pleasantly ad-free (at least for now). Plus I was able to watch/read the whole thing while waiting on hold for a call. Although I doubt there's a teen in the world that uses Snapchat because of this feature, they must be stumbling upon it nevertheless because the app's media partners consider it as a promising platform for reaching that elusive millennial audience.

In A Whole New Mind, author Daniel Pink outlines six fundamental abilities that will be essential for personal and professional success in the future. One of these is the ability to tell a story. As Pink writes, "We are our stories," and Snapchat gets that.

"My Story," is arguably one of Snapchat's most loved features (at least according to the teens I know). Here's how it works: By stringing together selected "snaps" (their videos and images) users can create a chronological narrative of their day that can be viewed for 24 hours. Users can set up their privacy settings so that these stories can be viewed by friends, a specially selected group, or by the entire universe of Snapchatters. Teens I know use it to share the funny moments of their day with an inner circle of friends.

"Live Stories" offers up collections of daily moments from users in cities around the world. You can see, for example, how someone in faraway Amsterdam spent his or her day. Evidently the company is receiving so many Live Story submissions from some parts of the world that it's expanding it to include multiple snaps for each moment. There's also something new called "Story Explorer" that lets users swipe up on any snap inside a Live Story to see the same moment from several different angles. If your head is spinning, join the club. The point is that Snapchat has tapped into what anthropologists have known for a long time -- storytelling is central to human existence.

These Snapchat stories honor the true nature of storytelling -- they are compiled in a sequential order with a beginning, middle and end. According to a Snapchat spokesperson, "Users are incredibly creative in building these narrative arcs." Plus the tools, and thus the stories, are getting better. So good in fact that the app just struck a deal called "Tribeca Snapchat Shorts" with the Tribeca Film Festival and will be featuring the best "stories" during the upcoming New York City film fest.

Most adults I know want young people learning the fundamentals of visual storytelling because no matter what they choose to do in life, this is an important skill in an increasingly visual world. Snapchat lets them practice this in a fun, if sometimes also a ridiculously silly, cringe-worthy, and shouldn't-they-be-doing-something-else manner (at least by adult standards). But they sure enjoy it. According to a Snapchat spokesperson I spoke with, "60 percent of people who use Snapchat daily create content every day." (Just to remind you, that's 60 percent of 100-plus million daily active Snapchatters. You do the math!).

Social media loads a lot of pressure on teens. For example, there's the pressure of knowing their "digital footprints" are possibly being scrutinized by future colleges and employers, and that's one of the primary reasons they like Snapchat so much. On this app their mistakes and embarrassing moments largely disappear (except when they're screen-captured, but evidently Snapchat has a tool that alerts users when this happens).

Teens also experience pressure from wanting to look and/or sound just right in front of their peers, that much about youth hasn't changed. Because of this, most young people carefully curate (usually) their image on, say, Facebook (if they use it at all) and Instagram (which most still use), but they don't have to worry about this so much on Snapchat because of the whole disappearing thing. When I asked about the concept of snaps disappearing, a Snapchat spokesperson responded that on their app, "you aren't the sum of everything you have ever done, you're the result." In other words, the pressure is (mostly) off because tomorrow your snaps or story will (sort of) be yesterday's news.

Two Things That Can Make Snapchat (and Every App) Better

I hope I don't sound like an apologist or cheerleader for Snapchat because I know that, just like every tool introduced since the beginning of time, it can be used for harm or for good. But telling teens to delete it (good luck with that by the way) isn't a solution to reducing harm. A better solution is for all of us to work together at keeping kids under 13 off the app (according to Snapchat's Terms of Service, users must be 13 years of age to use the app) and to make sure young people are learning digital citizenship skills to use it well.

As David Ryan Polgar, co-founder of the Digital Citizenship Summit and tireless advocate for digital citizenship, reminds us:

For every story of social media misuse, there are countless others where teens utilize a platform to create art, get politically involved, or raise money for a friend's illness. While it is crucial to focus on curbing misuse, it is also important to encourage all the times it goes wonderfully right.

So that's why I believe Snapchat is the app to watch, particularly if you are a parent of a teen, because chances are they are Snapchatting as you are reading this (there are 7 billion video views on Snapchat every day, as many people as are on the planet). So why not ask your teen to explain the features I just tried describing above? They'll surely do a better job. Maybe they'll even share the story of their day with you. Who knows? Anything is possible.