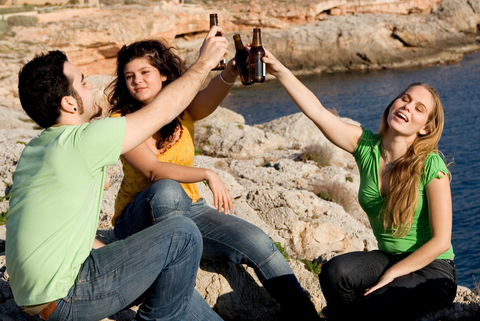 I am an alcoholic. Seventeen years and nine-ish months ago, I quit a 2-liter of hard liquor a day habit. I started drinking when I was 11 and spent the years up until I decided to quit getting drunk every opportunity I got. It took me nearly three years finally to get clean. Now, as a PhD and addiction researcher, I realize there are a lot of things parents just don't know about drinking, and should. Here are four tips for parents to consider when talking to their kids about alcohol.

Drinking early is not a normal 'rite of passage.' While Harvard University reports that the average age for first alcohol use for girls is 13 and for boys, 11, drinking is not a necessary or normal activity for children. These averages indicate that a large number of children begin drinking alcohol at a very young age. The National Institute on Alcohol Abuse and Alcoholism states that nearly a third of eighth graders reported drinking in the last year. Rather than write this drinking off as normal experimentation, adults should be aware that children who begin drinking very young are at a higher likelihood of developing substance abuse disorders later in life and are giving a clear indication that there is probably something wrong in their lives with which they do not have the tools to cope.


Kids listen more than parents think they do. The eye rolls and exasperated expressions are hard to deal with. But studies show that kids really do listen when adults talk to them about alcohol and alcohol abuse. What's important is that parents not make these conversations one off "talks" in which everyone is on edge, waiting for the conversation to end. Instead, frequently discuss with your children your expectations of them. Talk to them about the consequences of their actions, about how they can't always see around the corner, but you can. For example, young people who drink are more likely to be the victims of violent crime than those who don't. A night of drinking that ends in rape and an unintended pregnancy are not the types of scenarios young people are thinking about when they grab a bottle out of someone's liquor cabinet. Don't scare your kids, but be real with them about what drinking can do.


If you are abusing substances, your admonishments will have no meaning. Parents are very often criticized by their children for failing to lead by example. Substance use and abuse is one of those important areas in which you can rest assured that your behavior will have far more impact on your kids than anything you say to them. If you abuse substances or use alcohol or other drugs to help you cope with emotional problems or you binge drink - you can rest assured that anything you say to your kids about the negative consequences of drinking will go right out the door. No one likes a hypocrite. If you have a substance abuse problem, get help. As a parent, your actions have to match your words. It is relatively easy to be a positive role model. Some simple tips are to make sure that at your celebrations you have plenty of non-alcoholic beverages available and don't let drinking be the focal activity.


Listen as much as you talk. Conversation is a two way street. Give your children ample opportunity to talk with you about the stresses and pressures they face. Have family time often, during which all the electronic devices (even yours!) are put away and you can really engage with one another. What your kids share may surprise you. If you are willing and able to listen to your children, they are much more likely to come to you in times of need and confusion as they wrestle with their growing independence.