We'll have what they're having.
By Sarah-Jane Bedwell, SELF 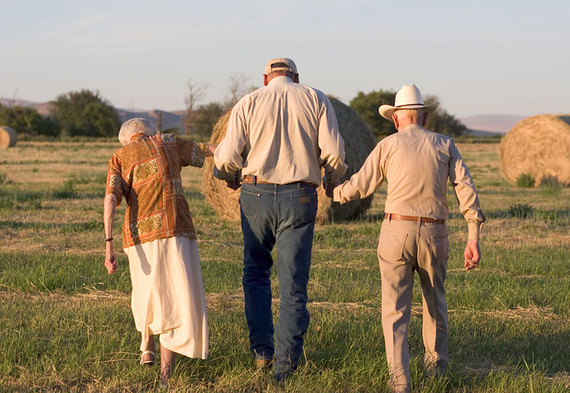 There's one pretty mind-blowing characteristic about the people who live in these five communities throughout the world: Okinawa, Japan; Sardinia, Italy; the Greek island of Ikaria, the Nicoya peninsula of Costa Rica, and Loma Linda, Calif. On average, they live to the ripe age of 100 years old at rates 10 times higher than the average American. Mic. Drop.

Over a decade ago, writer Dan Buettner teamed up with National Geographic and a team of scientists to explore these areas, now called the "Blue Zones." His latest book, The Blue Zones Solution, takes a closer look at their healthy lifestyle habits -- particularly how they're eating. Here's a look at each region's key secret to long life that you can practice daily.

Sardinia: Eat a diet rich in calcium and protein.
One of the most unique factors that plays into the life span of Sardinians is the population's long history of shepherding goats and sheep. Sure, that type of activity guarantees good exercise, but it also means they have access to a diet rich in calcium and protein, thanks to the milk and cheese from their herds. And get ready -- Sardinians also believe they have another secret: "Making love every Sunday." There also happens to be a one to one ratio of female to male centurions in Sardinia, versus the ratio of five female centurions to every one male centurion in other parts of the world.

Ikaria: Follow a Mediterranean diet.
On the small island of Ikaria, Greece, people enjoy a plant-based Mediterranean-style diet, which has long been touted for its heart-healthy qualities. And now, you can add longevity to its list of the diet's benefits. In fact, Buettner has called Ikaria "the island where people forget to die." The foods that these islanders consume the most include potatoes, garbanzo beans, lentils, black-eyed peas, goat's milk, greens, fruit, and honey, plus a small amount of fish and very little meat.

Nicoya: Eat squash, beans and corn on the regular.
Buettner cites the "three sisters" (squash, beans, and corn) of Meso-American agriculture as the foundation of the healthy diet followed by the folks who live on the Nicoyan peninsula of Costa Rica. And as it happens, these three low-calorie foods are a solid source of heart-healthy fiber, vitamins, and minerals. The beans also provide a great source of protein to this mostly plant-based diet.

Loma Linda: Eat like a vegan--but add fish.
Interestingly, Loma Linda is a community of Seventh Day Adventists, which means in addition to avoiding smoking, drinking and media, the religious population follows what they call a "Biblical diet." Those who follow this diet live, on average, 10 years longer than those who don't. The diet relies on grains (such as oatmeal and whole wheat bread), nuts, fruits such as avocados, dates, and figs and vegetables. They skip anything with added sugar and drink only water or soy milk. While many folks in Loma Linda follow a vegan diet, some of them eat small amounts of meat and fish, like salmon. The ones who do include fish live longer than the vegans.

In The Blue Zones, Buettner also gives suggestions for other lifestyle factors of these zones that we can imitate in order to enjoy a longer, healthier life. Everything from making exercise more a part of our daily routine to mindful eating to dimming the lights an hour before bed for better sleep can contribute to longevity, so get to it -- we've got decades to go!

More from SELF:
The Genius Trick for Perfect Scrambled Eggs
10 Ways to Guarantee You Get Up for That A.M. Workout
The One Food Nutritionists Eat Every Single Day
Your 1-Day Anti-Aging Diet
9 High-Fat Foods that Are Actually Good For You
What's Your Sex Number?