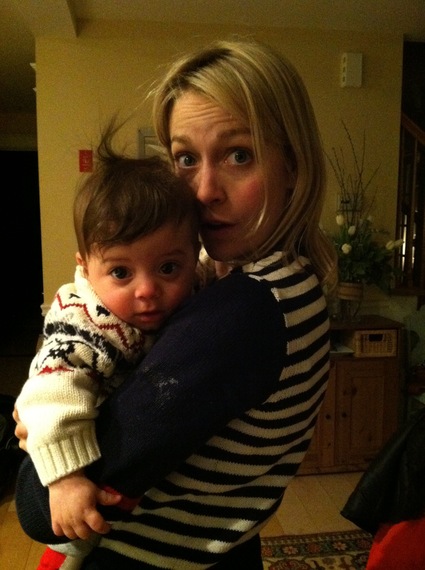 Two soft baby hands patted my hair, and as I peeled my hands from my snot-covered face, tears streamed down my cheeks, and Wren grinned wide. Peekaboo! My daughter's innocent ignorance of my despair made me cry harder. In the other corner of the bathroom, my three-year-old son sobbed atop a small, plastic potty. I felt myself drowning in the waves of my biggest mom fail. Ever.

Charlie will be four in July. He's an endearingly earnest, curious, serious little fellow. He hates to draw (prefers us to draw for him), loves to read, and is a puzzle savant. He prefers his meals be accompanied by both milk and water, and disdains all food items of the green variety. He requests a snuggle, a hug, a kiss, a squeeze and an eskimo kiss every night before bed. He also poops in a toilet. 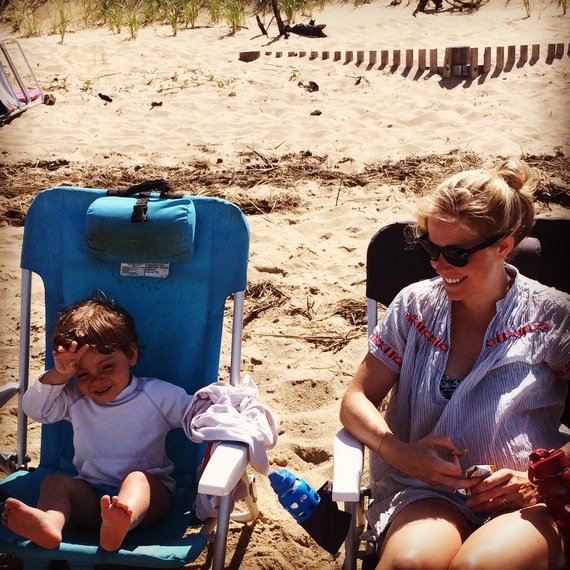 This was not always the case. As a baby, he pooped whenever he wanted, wherever he wanted, but all good things must come to an end. When the gals in my local mom scene stopped obsessing about which solids to introduce their babies to [gotta go with organic veggies and eschew the carbs - wouldn't wanna stunt their little palettes!], and started buzzing about potty training, I kept my ears open for pointers, but knew I'd take a totally organic approach, and be super chill about the whole thing.

Naturally, some of Charlie's female buddies were the first to forge into the new, un-diapered territory of bowl movements [girls - we run the world], but as Abel, Tucker, and Milo started showing up to playdates sans diapers, I started to feel more pressure to get Charlie on the potty band wagon.

After consulting my trusty parenting advisor, Google, I armed myself with a plan. I'd let Charlie lead the way, respect his preferences, and give him autonomy over his own body. I'd remove the rugs from the floors and let him run around the house naked. I'd make potty training relaxing and fun, I'd sing songs, offer rewards, and above all, never, ever, ever make potty training scary. It would totally work. The Internet told me so.

The first time Charlie pooped on the floor, I smiled patiently, and told him, "It's ok - all kids have accidents," patting myself on the back for being such an enlightened, easygoing parent. When Charlie continued to poop on the floor with nonplussed regularity, my gentle, motherly smile started to feel like it might rip my face in half.

When stickers failed to motivate, bribes of cookies didn't work, promises of the latest Melissa and Doug tow-truck made him yawn, and even Cranky the motherf*cking Crane Hook failed to make my son blink an eye, I started to wonder just how much longer I could remain oh-so-very-chill. 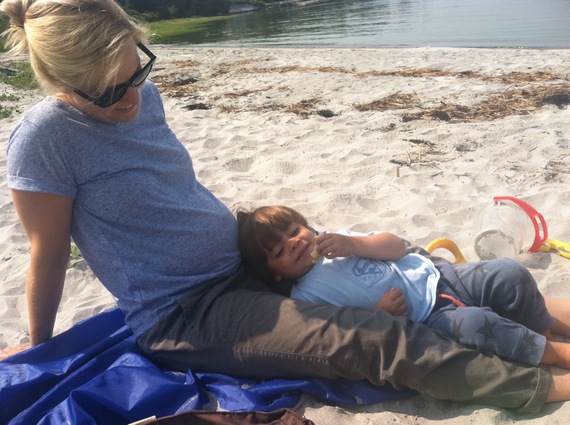 One day I had a bad day, as mothers of small children are wont to do. Charlie wandered into my presence and I immediately smelled something awry.

"Charlie! Do you have to poop?"

Google told me that this was prime time to plop Charlie on the potty - he had clearly started to poop, so if his body was ready, so was the potty. We sat and sat and sat. Wren, his one-year-old sister, bobbed in and out of the bathroom, foraging for choking hazards and cleaning products with which to poison herself. I read books and books, uncomfortably crunched on the cold, tiles. I was hot. I was hungry. I was sick of cleaning poop off the floor.

I looked at Charlie's calm little face, and my weeks of patience and vigilance started to taunt me. He was happy as a clam, and smiled beatifically at my rendition of Little Blue Truck. I started to wonder if Charlie was torturing me intentionally, if he could sense my desperation that he conform to societal standards. He had to poop - why wouldn't he just do it where I wanted him to do it?

I told Charlie I'd leave him alone until he pooped (and then of course, he could earn diamonds and rainbows and dragons if he complied with my humble request). I left the bathroom, and he began to hop up from the stupid arm and hammer potty like it was a game of hide and seek, giggling when I repeatedly caught him and marched him back to the bathroom. Meanwhile, vestiges of feces remained on his bum, Wren was trying to wear the potty like a hat, and I still hadn't had lunch.

In my next stumble down the rabbit hole of parenting failure, I made a fake (and very loud) phone call to Charlie's doctor, and essentially threatened Charlie with a visit to his pediatrician if he didn't poop. An hour had passed by this point. My voice became shriller with each passing minute, and my hold on reality/perspective/sanity became more and more tenuous. WHY WOULDN'T HE JUST POOP?!

At some point, Charlie started to cry and ask for a diaper, but I had gone so far by this point - I couldn't bear the idea of "giving up." In a firm [savage] voice, I told him [yelled at him] that he couldn't leave the bathroom until he pooped. I left the bathroom and closed the door behind me. Charlie lunged at his side of the door, rattling the doorknob, and I heaved my body against it, listening to him wail, "Mummy! Mummy! I don't want to be alone! Mummy, please!" 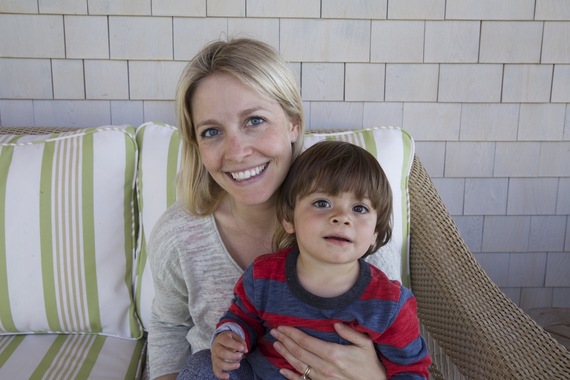 By this point, my body had tightened into a knot, my temples were pulsing, and I was sweating profusely. Wren was yelping and pawing at my legs, clearly stressed about her brother's situation. I entered the bathroom and roughly returned Charlie to the potty, gripping him by his narrow, birdlike shoulders. He was naked and sobbing. I looked into his eyes, and began to plead with him, imploring him to poop on the potty so this could all be over.

It was at that moment that I slumped against the washing machine and broke down about my children in front of my children for the first time since having children. In a twisted, shameful way, I think I even hoped my tears would shake Charlie out of his stubborn refusal to empty his bowels. In my experience of emotional manipulation, crying often softened adults - maybe it would work here!

But of course, it didn't. And when Wren mistook my covered face for a round of peekaboo, I hit my parenting nadir. I picked up Charlie's limp body, took him to the tub, and quietly, sadly, washed him. I diapered him, dressed him in cozy clothes, and held him. Then I plunked him on the couch with an episode of Thomas and called my husband. 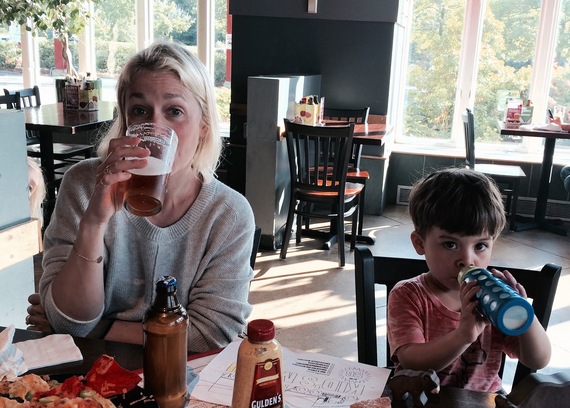 When Brett got home, I gave myself a long time-out, slugging a glass of wine, and staring at the walls of my bedroom. I felt like a monster. It's not like I'm a stranger to losing self-control. I do it fairly regularly when I fight with my mother, sister, or husband. But this was the first time I had lost it with my children in such a visceral, painful way. It was the first time my top priority was not providing a trauma-free environment for my children, the first time I felt such elemental rage towards my child, the first time I lost all conscious consideration of my child's needs, emotional capacity, or developmental capabilities.

As much as I cognitively grasp that Charlie's personality, his strengths, his weaknesses do not reflect me as a parent, as an intellectual, or as a human being, sometimes my brain turns off and something more animalistic and self-serving takes over. When Charlie sobbed "mummy," my heart was wrenched with desperate love for him, but my ego held onto a bloodthirsty need to win.

Potty training was not about Charlie - it was about me being able to show up at playdates and say, "Charlie finally pooped in the potty!" It was about me checking off all my parenting boxes. It was about the fear-mongering BabyCenter emails telling me the average age of successful potty-training. It was about me being an A student in high school. And as a stay-at-home parent, it was mostly about me needing/wanting some nonexistent force of parenting wisdom to assure me that I'm not totally screwing up this whole raising-a-human-being thing.

After Potty-training Trauma 2015, I gave the reins back to Charlie (for real, this time), and after a few months, while sitting on the potty, he called me into the bathroom. 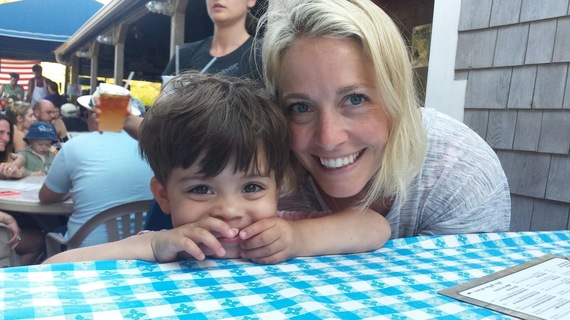 Check out more of Sara's musings about parenthood, snacks, books, and pretty wallpaper on Instagram and at http://www.sara-petersen.com