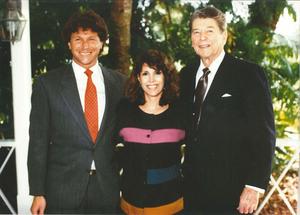 On Monday, February 16th, our nation will pause to celebrate President's Day and remember all the Presidents who served our nation. I would like to take this occasion to share an experience in which President Reagan (for whom I had not voted) taught me something powerful and lasting regarding the value -- and importance -- of loving (yes I mean loving) our country.

Here's what happened. Exactly 25 years ago, John Bryan, the worldly and philosophical chairman of the Sara Lee Corporation, invited a small group of business and government leaders and their spouses to a private island in the Bahamas for an exclusive four day "think tank" focused on "Understanding The Future." The curriculum for this retreat was going to cover everything from science, technology and demographics to the art of leadership. The faculty for the gathering included, besides myself, John Naisbitt, author of Megatrends, Lester Thurow, then Dean of the Business School at MIT, James Fletcher, the Director of NASA, Zbigniev Brzezinski, Counselor of the Center for Strategic & International Studies, and last and most certainly not least, former President Reagan.

As it turned out, President Reagan addressed our intimate group of 50 or so people on Tuesday, February 6th, which also happened to be the date of his 79th birthday. So, after lunch was served on an outdoor patio on a balmy Caribbean day, his birthday cake arrived and we all joined in singing a rousing rendition of "Happy Birthday." The president seemed to be in very good spirits as he then posed for pictures with each of us. As my wife Maddy and I stood beside him, I was struck both by his larger than life charisma and the all-too-human frailty of an elderly man.

As we took our seats, we were informed that President Reagan would first deliver an informal speech on a variety of domestic and international issues. We were also told that when he finished this speech, we would then be able to ask him a wide range of questions.

What an exciting opportunity! I was in my late 30s at the time, and Reagan was the first president I had ever met (I've had the honor of meeting four more since then: Ford, Bush Sr., Carter and Clinton). Sitting with a small group of extraordinarily powerful and interesting men and women, I was going to be getting a chance to participate in a private, no-holds-barred discussion with one of the most renowned world leaders of the modern era.

However, while he was completing his talk, Reagan's assistants discreetly handed out pre-prepared questions to each of us on 3x5 inch index cards. Apparently, the former president preferred to be asked questions that he already knew the answers to.

Well, its not my nature to go along with such pre-packaged protocol. So after he responded "astutely" to a handful of (prepared) questions, I raised my hand to catch his attention -- which wasn't too hard to do since Maddy and I were sitting directly in front of him and only about 7-8 feet away.

He selected me. I took a moment to stand up and face him, with respect. Although I had issues with some of his political and economic policies, I have to admit that when he turned to talk to me, I immediately felt engulfed by his legendary personal gravitas. I then steadied myself, took a deep breath and asked: "Mr. President... as a long-lived American, and as a prominent leader of Americans, I imagine that you've given a great deal of thought to makes us and our country special? Could you share your feelings about this?"

His face revealed a slightly pained look as he realized that I was not working off the cue cards. Nevertheless, and to his credit, after first taking a moment to reflect, and then fastening his eyes on me he said: "Well Ken, I have been thinking about that very question myself lately. Here is what I think makes America the greatest country in the world."

"In this day and age, you could move to Brazil, but in so doing you wouldn't ever be considered a Brazilian. If you moved to Japan and spent the rest of your life there, and even became fluent in the language and culture, you'd never be accepted as Japanese. Similarly, if you chose to live and work in France, and even raised your family there, the French would surely never think of you as a Frenchman. But anyone who moves to America from countries like these and gains citizenship, can become an American !

A deep silence fell over our group as we all realized we had just heard something important.... very important.

I was so moved by the clarity and passion of Reagan's extraordinary response that I may have only imagined his eyes welling up with emotions -- but they did, and I was transfixed. He continued by explaining to me and to our group that in our nation, people from every conceivable religion, race, political persuasion, ethnic background and nationality have joined together to undertake an historic social experiment: the creation of a living, breathing democracy -- from scratch. And to raise the ante, we are doing so by capitalizing on the combined resources, creativities, experiences and values of a truly diverse mixture of humanity.

And then, in another dramatic moment, former President Reagan reflected further: "The other thing that I particularly appreciate about America," he then said, "is that in nearly all the nations of the world, each of their constitutions tell their people what they can do. In ours, the people tell the government what it can do."

When he finished, a hush fell over our group as everyone -- democrats and republicans alike -- had been deeply touched by both the insightfulness of President Reagan's reflections and the intensity with which he was feeling them. And since in my "normal" life, I tend to spend a good deal of my time with professional cynics, I must admit that I was truly struck by how good it felt to experience a burst of pure unadulterated pride in being a part of the grand -- noble even -- American experiment.

Now, you should also know that while "patriotism" generally fascinates me, I'm sometimes put off when people use twisted versions of it as a self-aggrandizing contrivance. However, Reagan was different. As the President shared these comments with me and our group, it was apparent that he didn't just believe in America, he genuinely loved America. His love for America was pure -- almost spiritual... he loved the full and complete vibrancy of the American experiment.

What Ronald Reagan taught me on the occasion of his 79th birthday, is that believing in America is terrific but loving America is an even higher form of patriotism. So join me in celebrating Presidents' Day and in so doing, take a moment to reflect on what you love most about our great country.