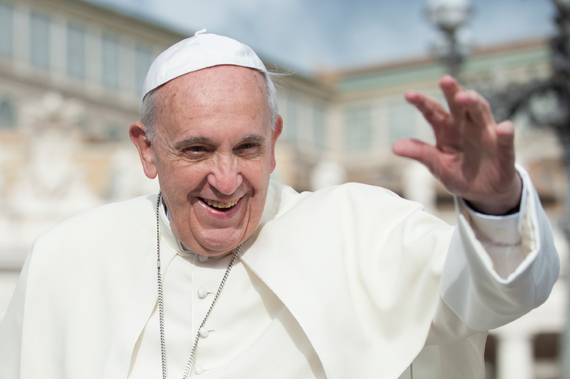 The hardest thing about any political campaign is how to win without proving that you are unworthy of winning. -Adlai Stevenson

With the political primaries in full swing, voters' blood is boiling listening to would-be future leaders of our country. Candidates from both parties have left voters confused, frustrated, disgusted, frightened and angry. An "us vs. them" mentality has created a wider divide than ever before. Who can voters trust? Who can really fix what's broken? What will our country become?

While it may sound a bit cheeky, and certain political purists may roll their eyes at the sentiment -- we need Pope Francis. If he were running for president, he'd get my vote, and I'm not Catholic. I love this Pope. In a mere three years, despite serious obstacles, he has accomplished major bureaucratic housecleaning, set new directions and priorities for a global organization not traditionally known for its innovation, and focused the attention and resources of the Church on matters of global concern. Other Popes have worked towards change and failed; some didn't even bother; some made things worse. It's been a long road and Pope Francis is number 266 in a long line of leaders.

Consider what the Pope is up against within the Vatican and compare this to what the President of the United States is up against with Congress. Resistance to change? Check. Hidden agendas? Check. A culture of infighting and power struggles? Check. A network of powerful administrative departments that seem to despise each other? Check. Wars between conservative and liberal wings? Check. Throw in scandal, hubris, greed, cover ups and conference rooms full of decision makers with narcissistic personality disorder and you've pretty much got it.

So how has Pope Francis done it? Why is he so popular?

Let's start with how he became the Pope. Jorge Mario Bergoglio didn't use negative television commercials, name calling and profanity or an over active ego to be considered for this position of leadership. There was no us-versus-them, no I'm right, they're wrong. Through a miraculous process unimaginable in the U.S., Pope Francis was chosen by people with strongly opposing views. I suspect he may have been chosen, in part, because of his gentle, unassuming nature. Some may have thought he could be controlled. Turns out, while he is gentle and kind he is also strong -- these are all qualities that our nation should be looking for in a presidential candidate.

Once chosen, it became clear that Pope Francis is a communicator. He has a Facebook page, he tweets, and when he speaks, it is without the usual Vatican filters. His goal isn't to get "likes." He seeks unity, resolution, focused action on matters like climate change, religious persecution, and the suffering of so much of humanity. Pope Francis seeks engagement with the world, including those who do not share his beliefs.

Pope Francis embodies a key trait of a great leader -- the capacity to connect with others -- at a deep level. For many, Pope Francis is a welcome change, a breath of fresh air, someone we'd like to invite to dinner and a conversation. He is influential, in part, because the emotional wake during and following his comments is an afterglow, not an aftermath, an aftertaste. Last week, Pope Francis had a conversation with the head of the Russian Orthodox Church, ending a nearly 1,000-year schism because of deep differences. Following the conversation, Pope Francis said, "We are not competitors, but brothers."

Pope Francis serves as a positive role model for the young people who will soon be running our world. Consider these evocative and appropriate lyrics from the Sondheim musical Into the Woods.

We are always modeling something for our children. The question is -- what are we modeling and how can we select leaders that will illustrate the values we wish to perpetuate?

Our current front runners are modeling an us vs. them mind set, which if any are elected, will ensure that there will be no change within a "do nothing" Congress with the worst track record in history.

Trump has stated publicly that he wants to beat China -- and anyone or anything else that offends him. Isolating America from the rest of the world is not only naïve, it is irresponsible and will only upset and confuse the countries that have stood by us. If Trump is elected and attempts to issue directives, Congress will stuff him in a locker and throw away the key.

Sanders displays an "us vs them" desire to rise against the one percent of the country, and while seemingly noble, this employs the same divisive strategy as Trump. Decreasing the gap and providing more opportunities for those less fortunate is admirable, but not in the path he has taken. Business owners provide jobs on which many families depend for their well-being. Targeting the wealthy as enemies will create a standstill and break down communications.

The polarized parties in the United States are in no danger of agreeing on one man or woman to step into the White House but the fact is, we are not "united." We are divided and we all know the saying divided we fall. The problem is that the debates are deepening the divide, amplifying the lowest part of who we are. Anger, fear, an illusion of superiority, a need to put others down.

We are a global economy, a global market place, relying on each other for survival. While we have a right to strongly held beliefs, our subjective truths are preventing intelligent dialogue. Multiple, competing realities must be considered and valued. We need a president with the charisma and strategy to unite all citizens, not support a hate-filled revolution. Until we master the courage and the skills needed to engage in conversations that help accomplish the goals of our shared civilization, devising a plan that transcends individual gain and personal ambition, we will move away from greatness, not towards it.