As of this week, there are 16 declared candidates in the 2016 presidential sweepstakes, with at least five more waiting in the wings. This makes for a rich cacophony of themes, messages, and policy proposals. But at the end of the day, this campaign really should be about one thing above all else--how to make the U.S. economy truly flourish again. Most people would agree we need an economy that is marked by expanding opportunities, rapidly rising wages, lower unemployment, and a broad-based sense of optimism about America's fortunes. The question is: How can we create those conditions?

The Information Technology and Innovation Foundation has offered a series of concrete recommendations in an open strategy memo and suggested campaign speech that we invite all candidates to borrow from freely. They detail a comprehensive policy program to grow the U.S. economy by invigorating enterprises through greater innovation, productivity, and competitiveness.

This enterprise-centric approach would constitute a wholesale reimagining of both conservative supply-side and liberal demand-side economic doctrines, yet partisans in both camps will find proposals they can embrace unreservedly. Among other things, the right will welcome initiatives to streamline regulations and lower corporate tax rates, while the left will find comfort in a higher minimum wage, more resources for education, and greater public investment in science, technology, and infrastructure. 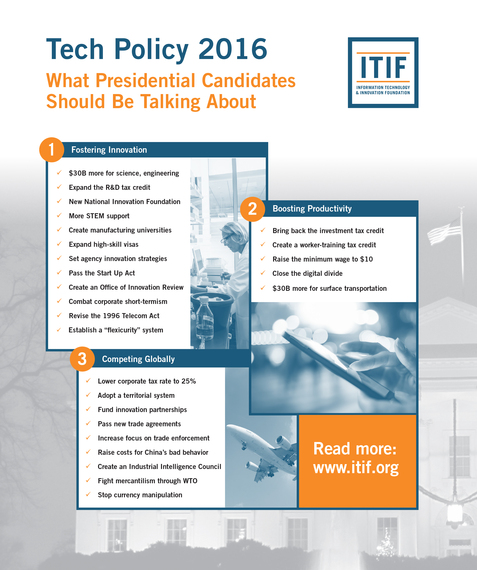 The common thread running through the whole program is that it puts enterprises first--because vigorous enterprise is at the heart of a flourishing economy. If businesses aren't innovating, they can't generate growth; if they aren't more productive, they can't raise wages; and if they are losing out to foreign competitors, then U.S. workers are losing, too.

Implementing any of the proposals that ITIF recommends would constitute noteworthy progress on its own, but together they would add up to much more than the sum of their parts. They would establish the framework for a cohesive national strategy to grow the economy and expand opportunities for all Americans by strengthening the underlying fundamentals of our economic well-being in the 21st century.

Read the full agenda and speech.
Share the infographic.