Fast forward 35 years, and it's likely you and those same friends have spent the past few months crying to Natalie Cole videos, walking in somber costume parades in remembrance of David Bowie, holding up cigarette lighters and beer koozies for The Eagles' Glenn Frey, raising fists in the air for Motorhead's Lemmy Kilmister, revisiting "Boogie Wonderland" on the car stereo for Earth, Wind and Fire's Maurice White, toking one up for Jefferson Airplane's Paul Kantner, reincarnating the raps of A Tribe Called Quest for Phife Dawg, hip-swaying for Denise "Vanity" Matthews or singing some twangy "Workin' Man Blues" for Merle Haggard.

Now it's time for another grief ritual - in honor of Prince. Prince?! Prince!!! I still can't believe it.

Why does it hurt so much when the "Artist Formerly Known As" our-favorite-R & B-genius-this-side-of-MJ dies?

I'm no psychologist or priest, but let's just call this punched-gut feeling a byproduct of blind faith and a broken heart. In 2016, it seems we music fans keep getting hit by arrows in the jugular just when we are at our most vulnerable. We continue to love without fear, but we also mourn without end. Every time a musician dies, a piece of us goes with him or her. Thanks to technology, media (radio, MTV, the golden age of magazines), late 20th century economics and upward mobility, Baby Boomers and Gen X-ers have enjoyed the collective experience of sharing music throughout our entire lifetimes. Records, 8-Tracks, Cassettes, CDs, MP3s. Let's face it: No other generations in history have invested more in music as we did and still do. We live it and breathe it; it is our prime recreational activity.

The Millennials and others who come after us will never love music the same way again. Sure, they will LOVE music. They will see concerts and stream songs and hum pop tunes. They will play their expensive vinyl on newfangled hi-fi record players. They will hang posters in their rooms and obsess over heartthrobs. They might even learn to play instruments or grow up to become music journalists one day. But, when they're 50 years old, they won't be able to walk down any street in America and find someone exactly their age and bond instantly over the same music. That tipping point has passed.

As of this writing, Prince's cause of death has not been released. In the end, the reason doesn't matter, because he is gone and the music is still here with us. The music is between us. It is our life gel. This is precisely why Prince's death hurts so much: We sense more sharply now that the shared experience of music is fleeting and slipping through our fingers. Symphonies - dying. Rock and roll? Old fashioned. Hip hop? Yawningly ubiquitous. Pop concerts? Still popular but now costing so much that barely anyone can afford to go. Have you seen those Killer Mike commercials about Apple Music? Apple and Sonos are desperate to sell you expensive speakers, yes; but perhaps more altruistically, they want to do their tiny part to save the shared experience of music. Listening. Out loud. With your ears and your family's ears and friends' ears at the same damn time. Imagine. That's what we did growing up. Will our kids share music that way? Will their kids?

Seven days ago, I was lucky enough to attend Prince's last evening of concerts, in which he performed back-to-back shows at the Fox Theatre in Atlanta on Thursday, April 14. We in the audience knew Prince had rescheduled from the previous week due to a reported case of the flu, but we had no idea that he continued to be unwell. He sang his purple pants off (see the early show setlist here and the late show setlist here). We hooted and hollered and grasped the hands of the folks in the seats next to us. It was like the rainbow coalition in there. Every gender, hue, race, background. We morphed into one being under the spell of the piano and Prince's simple, elegant and tuneful majesty. Every note produced further evidence that he was one of the most purely creative and otherworldly talents to walk the earth in our time.

The show was staccato, haphazard and perfect. What got to me as much as hearing Prince's brilliant falsetto ring out into every crevice of the historic theatre, though, is what happened when we exited the building. The two blocks in front of our city's most beautiful venue were filled with happily honking cars, smiling policemen, crowds singing in the street. The night no longer belonged to Prince. It belonged to us. Little did we know we had already become doves, carrying twigs of his soul and taking the groove back to our neighborhoods, our social media feeds and families. Wow. Prince saved his last dance for us. What an honor and responsibility. We should do the same for future generations.

Play a Prince song tonight. Crank it wide open. Prop the windows and doors. Sweep the stoop. Scream it. Put a boombox on your shoulder. Sing along with someone you love. As Prince - and every other musician who left before him this year - taught us, music is life. Even after death. 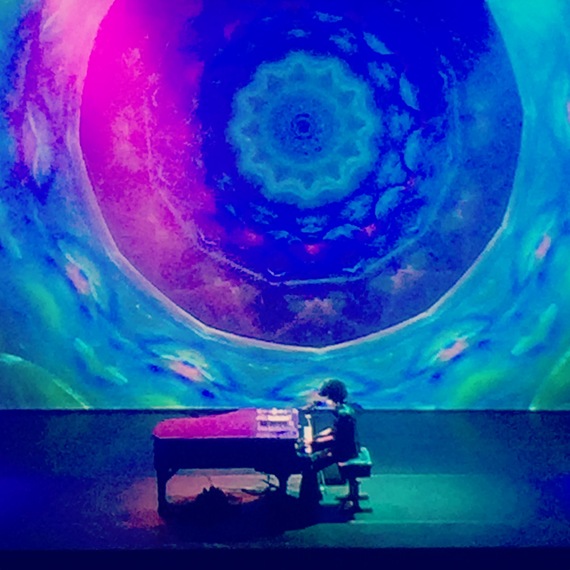 Prince performs at the Fox Theatre on April 14, 2016.
Photo by Kristi York Wooten