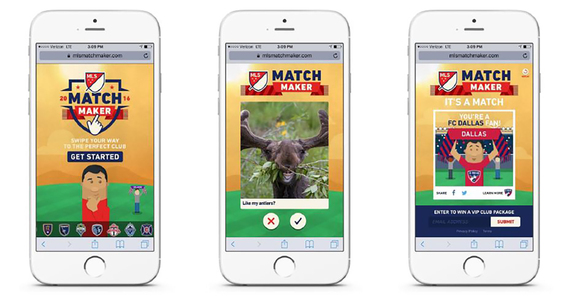 For the past few years, my agency has created engaging digital campaigns designed to convert casual sports fans into devoted Major League Soccer fans. This year, we created MLS Matchmaker--an interactive experience that determines which MLS club is right for you based on fun photos, GIFs, and captions that you can "swipe" through--right to "like," left to "dislike." These swipes activate back-end logic that matches you with an MLS club. Whether it's the New York Red Bulls, Los Angeles Galaxy, Chicago Fire, Seattle Sounders, or the New York City Football Club--there is a team suited for every soccer fan.

Major League Soccer is the fastest growing sports organization in the United States. It's also one of the most diverse--not just among the players, but also the fans. Considering the wide range of users we projected would engage with the app, we were interested to see if any data collected from the campaign might capture some insights into consumer behavior.

The bottom line? We wanted to know what the quick decisions we make say about us.

By studying MLS Matchmaker data, we were able to ascertain what drives decisions and the types of things we're drawn to when given comparisons. I sat down with Aaron Pfannebecker, who was one of the chief architects of this campaign at Situation Interactive, for his view on what we learned along the way.

DAMIAN BAZADONA (DB): Well done on the campaign--it seems to have generated a lot of activity. Out of the tens of thousands of interactions, what would you say is the biggest surprise in terms of consumer behavior?

AARON PFANNEBECKER (AP): To create MLS Matchmaker, we sourced over 160 unique pieces of content. This content was split between static images and animated GIFs. Roughly fifteen percent of these were soccer-related, while the majority focused on funny stereotypes of specific geographical regions. What we saw surprised us. I expected that people would respond to humor--that the "likes" on these "funny" images would be universal. But they weren't. People responded less to humor than to images that evoked relaxation, peace of mind, and vacation. For example, the MLS cities/clubs that were associated with a beach or nature elicited the greatest response. Think places that scream getting away from it all: California, Florida, the Pacific Northwest, and New England. It's interesting--and not at all what I expected.

DB: What does this say to you?

AP: It's tough to draw a conclusion--the data pool is large and disparate. While the majority of people seemed to favor vacation-based images, it's safe to say that between 30%-40% of people in major metro areas favored their hometown. The rest were completely scattered around the map.

DB: You mentioned that the campaign imagery was split between static images and animated GIFs to evoke specific feelings from the user. Do people respond more to static images or GIFs?

AP: I swear I'm not dodging your questions--but this is another one where I don't have a straight answer for you. By and large, it's the content that matters most. If a GIF evokes something unpleasant and the subsequent static image does the opposite, the user favors the static image. It's an interesting question because it actually points to a technology challenge. We live in a world of moving images, and an MLS Matchmaker comprised completely of GIFs would be ideal. But we have to make technology considerations like how long it takes for the site to load. It's the constant balance of the message and the medium. But that's also what makes it fun. And it's a reason that makes revisiting this project year-after-year so rewarding--because inevitably so much has changed in terms of what's possible on the technology platform that the canvas of what's possible in terms of the content continues to expand. It just makes my job more fun and satisfying--which seems like something to swipe right about.

In today's landscape, we make quick decisions all the time. It's always interesting to take a step back and decipher what our choices are saying about us. And if our choices lead us closer to a Major League Soccer game, well, that's just a bonus.