Unlike the British press, which openly acknowledges and parades its biases, many American news outlets like to maintain a pretense of objectivity. But this doesn't mean that they're objective, it just means that their biases are more insidious. Many media outlets clearly like Hillary Clinton and dislike Donald Trump, and these views have quietly colored their reporting on the presidential race. Last night Bernie Sanders won as many states as Donald Trump lost, but Clintonites will try to paint the Democrats' race as effectively over while anti-Trumpsters will look for excuses to say that the Republicans' race isn't finished yet. These media narratives are used to give the press' favorites "momentum". If the public believes a race is over, it often is, regardless of whether or not the numbers really make it so. So by crowning a nominee (or refusing to crown one), media outlets exercise power to shape the races grounded in their biases. To understand what really happened last night, we have to look at whether candidates are meeting or exceeding their projected paths to their respective nominations.

Let's look at each party.

In the weeks before the presidential race, some national polls had Clinton up by double digits, while others showed a close race. 538 came out with a set of projections for how Sanders was likely to do depending on whether he was down by double digits or roughly tied. To win the nomination, Sanders does not necessarily have to be in a tie yet, but over the course of the next couple months, he has to pull ahead, and the further behind a tie he is earlier in the race, the more decisively he has to pull ahead later to make up the delegates. In three of the first four states before Super Tuesday, Sanders' numbers suggested that he was closer than double digits, but not yet achieving a tie:

The exception was South Carolina, which was so much worse than the projection that Clinton supporters in the press began treating the race as if it were over, ignoring the results of the first three races. What happened on Super Tuesday was a bit bizarre -- in the south and in Massachusetts, Sanders did much worse than the projections, but in the states Sanders won, he exceeded them, sometimes by quite a bit:

What this indicates is that Sanders' support is more polarized than 538's model predicted -- in the south, he is much weaker than we would expect in a competitive race, but in the north and west he is strong enough that his numbers are now consistent with winning (Massachusetts notwithstanding). His ability to win Minnesota, Colorado, and Oklahoma by double figures indicates that Sanders could potentially exceed the 538 tie projection throughout large parts of the Midwest.

The national polls before Super Tuesday indicated a close race, with Sanders polling nationally roughly where Clinton was polling in 2008 at this same time-no one thought Clinton was finished then:

But many media outlets helped Clinton stay in the race in 2008 by painting the race as a close contest. Today many of those same outlets are trying to write Sanders off, and if we're not careful this may become self-fulfilling. It doesn't help that Super Tuesday in 2016 was dominated by southern states where Sanders is weak. In 2008, the Super Tuesday list was more geographically diverse, and despite being behind in the polls nationally, Clinton won 12 states to Obama's 11. With the south-heavy schedule this year, Sanders trailed on Super Tuesday 7 to 4. It's important for everyone to remember that Bernie Sanders is not running for president of the Confederacy.

None of this is to say that Bernie Sanders is guaranteed to win-he is still definitely the underdog. Personally, while I think Sanders has a better shot against Trump than Clinton does, I still think Clinton will probably beat him in the primary, because too many Democrats don't understand how electable Sanders is and don't understand how much this primary matters. But it is far too early to give up hope. In the next week, six more states will go up for the Democrats: 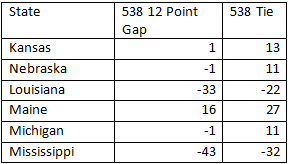 I'll expect Sanders to lose Louisiana and Mississippi by more than the 12 point gap margins. What I'll be interested in is whether he can again exceed the tie projection in the remaining four. If he can continue to do better than the tie projection in most western and northern states, he may eventually overcome Clinton's advantage in the south. We have to wait and see. If you're a Sanders supporter, the key thing is don't write him off, don't let the media write him off, and don't let your friends write him off. The media narrative that the southern states are generating is more dangerous to the Sanders campaign than the actual defeats in the south are. If people in the rest of the country continue to believe he has a chance and show up the way they did in Colorado, Minnesota, and Oklahoma, he may yet win. Don't let the south decide the race -- if it were up to the south, Democrats would never even get the presidency nowadays.

This race is actually over, even though many people are not admitting it. Here's the reality Super Tuesday presented to us:

Donald Trump won as many states as Clinton did last night, and unlike Clinton they were not all concentrated in one region (Massachusetts notwithstanding). Trump won both races in the northeast, and 5 out of 7 in the south, losing only Ted Cruz's home state and Oklahoma. If he has a weakness, it's in the west-he lost both Minnesota and Alaska. But he lost them to two different candidates, coming second in both contests, and his earlier dominant win in Nevada indicates that he will win some of the western states too.

No individual anti-Trump has shown any ability to consistently consolidate support in a region. Cruz was second in the south, Kasich was second in the northeast, and Rubio was mostly third. Carson was irrelevant. The folks who want you to believe that this isn't over push the "Trump ceiling" fantasy, which holds that if any of these folks drop out, nearly 100% of their supporters will go to an anti-Trump. Only affluent pundits who are disconnected from ordinary Republican voters could possibly think this. Trump's favorability numbers among Republicans are about as good as anybody's: 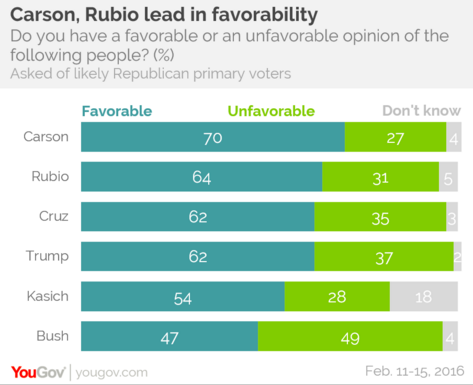 Majorities trust Trump on the economy, immigration, and foreign policy: 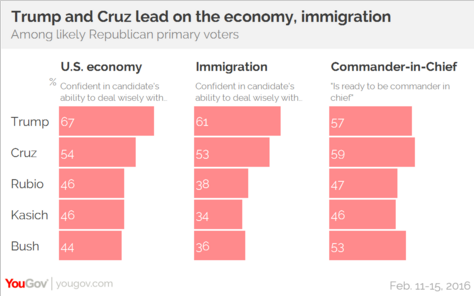 For all of these reasons, Trump has continued to pick up support as the field has cleared. No candidate has gained more support since the start of February:

Indeed, the only other candidate to win multiple states Tuesday night -- Cruz -- has lost support even as the field has cleared. So far, all four of these guys are in such deep denial about how much trouble they are in that not a single one has even agreed to drop out (with the possible exception of Carson), so proponents of the Trump ceiling theory may not even see it tested.

Let's admit the obvious. Barring some freak incident, Donald Trump is going to be the Republican nominee. We just don't know which Democrat is going to run against him yet. After reading this terrific piece by Nathan Robinson, I hope for the sake of the country it's Sanders.

PhD student at the University of Cambridge