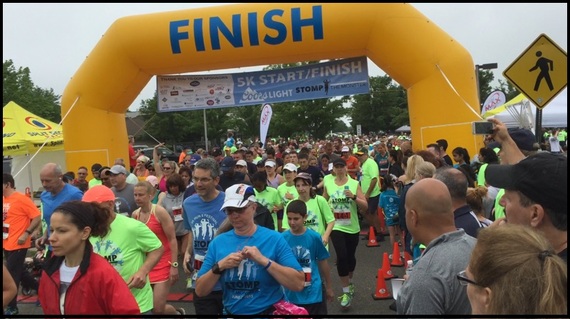 You know how I love to write about events that are kid friendly? Well, that's because I'd rather write than learn how to cook.

Today's adventure was attending the Stomp the Monster 5k Run and Festival. STOMP The Monster provides financial and other support to cancer patients, their families, and caregivers when they need it most -- during their fight with the disease. They promote a healthy lifestyle with proper diet and exercise, leading by example, and provide funding for potential advances in prevention and treatment.

I literally just plagiarized Stomp The Monster's website. I even had to look up how to spell the word "plagiarized."

I know, I know. You're thinking, "What? Ilana is actually going to RUN a race?" HAHAHAHA! Uh, no. Ilana DONATED the funds and donated the kids to run the race. Ilana also donated an extra $10 to the beer garden fund and didn't have enough time to drink beer. Why am I talking in the third person about myself?

(OMG! I just realized I didn't have an ounce of coffee today and it's 8pm! [crackling sounds] Does. Not. Compute.)

You know who did this to me? Andi Grumet Sawin and her friend Stefanie Schneider. The ladies in charge of the whole Stomp the Monster. 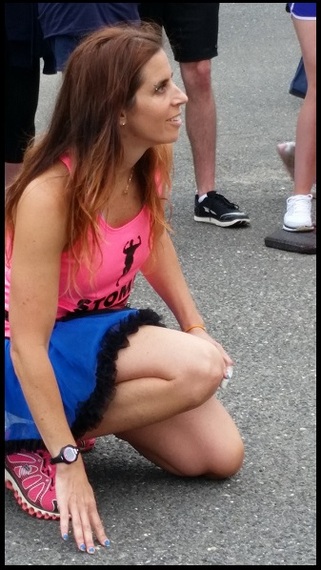 Andi Grumet Sawin cheering on the kids as they approach the race's finish line.

On the StM website, you can read all about how Andi's brother, Seth Grumet, had Hodgkin's Lymphoma and how sister Andi donated her bone marrow to save Seth's life. The procedure is not pretty, but the outcome sure was for the Grumet family! What's fascinating is how they got the name Stomp the Monster. Here you go.

The event was held at the Rec Center in Marlboro, NJ and it was the perfect venue. Lots of room to spread out, parking right next door and porta johnnies lined up within actual walking distance.

I realized there was something wrong when nothing was going wrong.

The weather held up, there was food, a great DJ with dance music, vendors, face painter / henna tattoo woman and lots of smiling faces.

Now I love face painting just as much as the next person, but not when we have a long drive home and I already know from previous experiences that the hatchlings would touch their faces, get the paint on their hands and then get it all over my already-dirty car that I just spent $997 on to have the A/C fixed.

So JUST as I'm thanking whoever lives in the lovely overcast sky that my kids didn't see the face painting, some crazy mom runs up to us all excited about the kids' activities like the bouncy house and the, wait for it... the face painting. Crazy mom gets a pass because she found a live walking spider in my hair and got it out while keeping me calm. 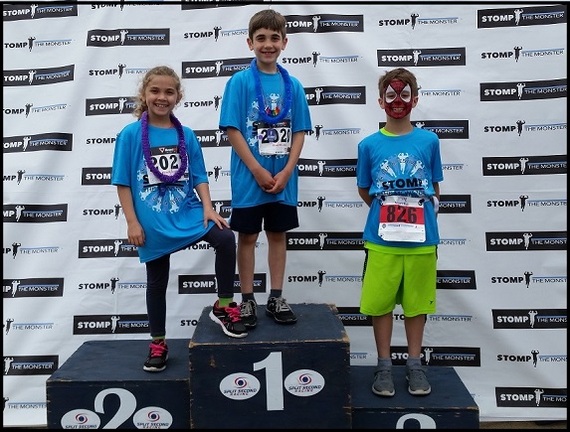 Children of all ages had a blast running the Kids' Race. All ages were also able to participate in the 5k Run and 1k Walk.

Meanwhile, I'm wearing my heavy winter jacket because the pockets have holes in them, which allows me to hold extra items because the items fall through the holes into the lining of the jacket, which goes all the way around. So in there I had four water bottles, tons of tissues and some stuff that's been in there for so long, it's no longer recognizable.

[SIDE NOTE]: Ever try to write an article while your kids are watching The Flinstones in the next room?

The kids' race was too adorable. It was broken down by age group, so you had the 2-3 year olds, 3-4 year olds, 5-6 year olds, 7-8's and 9+. All the kids had to do was line up and then run to the finish line where the Gingerbread Man was waiting for them with their medals. 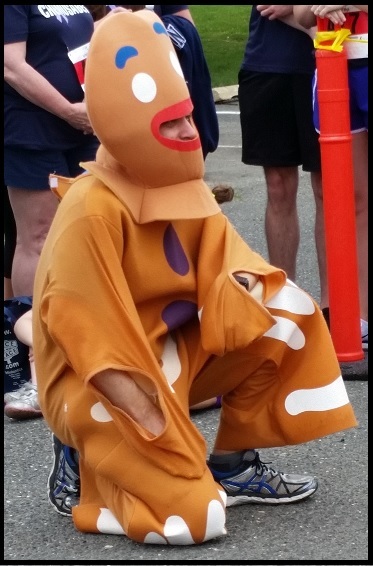 Does this Gingerbread Man look scary to you? I'm going to have nightmares for the rest of my life. Or are you afraid of clowns instead of Gingerbread Men?

In the end, all the children crossed the finish line and the crowd went wild!

Next up was the 5k race. Three 10 year old girls called The Dragonflies were asked to open up the race with The Star Spangled Banner. Did you not see the different color of the words 'The Dragonflies' in the previous sentence? Yes, that means click it, yeah YOU. 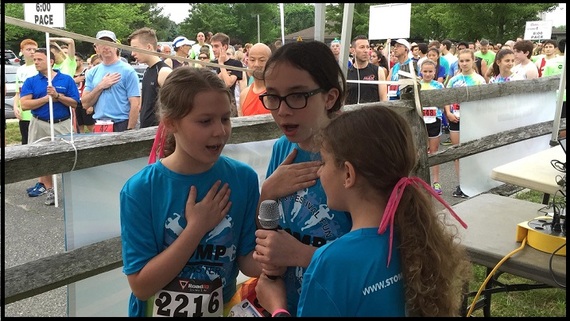 And the race was on!

The first person crossed the Finish Line a little after 15 minutes, and toward the end, around 42 minutes, I saw the crazy mom fumbling through the finish. She collapsed next to me, gasping for water, which, you know, I had in the lining of my coat.

I hope this year's Stomp the Monster brought in enough contributions to help the families with cancer.

It was a great day.

More:
healthy livingcancer lymphomaCharity
Newsletter Sign Up
The essential guide to taking care of your mind and body
Subscribe to HuffPost’s wellness email
Successfully Subscribed!
Wellness delivered to your inbox