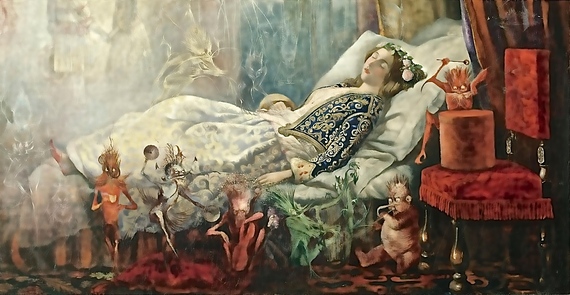 While dreams are singular to the dreamer, the act of dreaming itself is universal. But does the experience vary based on the time we have it? And are the visions that occur when we're daydreaming different than those that occur at night or when we're napping?

Scientists are beginning to grasp the various styles of dream narratives. More specifically, psychiatrists at University of Montreal are trying to untangle the qualitative differences between the three categories of dream-states.

What Past Research has Taught Us About Different Types of Dreams

We experience both REM and Non-REM sleep (aka deep sleep) at night and during naps, provided the later aren't too short. Through dream studies, researchers have made headway in assigning traits to dreams based on sleep stages. NREM dreams are shorter, less intense and more thought-like than the fanciful, intricate sagas we produce during REM sleep.

What We're Still Unsure Of

This isn't definitive, but some research indicates that people who daydream as a result of feeling anxious and distracted tend to have bizarre, highly emotional nocturnal dreams.

Aside from having less time to dream, does dozing off in the daylight inform our ability to recall dreams, or otherwise determine what we dream about?

Both are emotion-packed experiences that lack meta-awareness and reflect present concerns as well as long-term memories. But clear differences abound: Nighttime dreams tend to get weirder, darker and more defiant of physics than daydreams. Where exactly do daydreams fall on the continuum between conscious thought and unconscious mind-trips, and why? So far, the distinctions are tricky to make.

In the present study, published this month in the journal Consciousness and Cognition, the Montreal team sought to figure out whether nap-dreams are similar enough to their after-dark counterparts in terms of content and rate-of-recall to be scientifically useful. In other words, do sleep-stages (REM vs. NREM) primarily determine dreams, or does time-of-day matter, too?

Additionally, they compared nap-dreams (both REM and NREM) to daydreams on the basis of three traits: sensory attributes, weirdness and emotional intensity. They predicted that REM nap-dreams would take the cake in weirdness, intensity and sensory vividness, followed by day-dreams and, in third place, NREM nap-dreams.

So, they suspected that we think weirder thoughts when our conscious minds wander than we do when we're in a state of deep sleep.

At a sleep lab, 64 adult participants took late-morning naps while hooked up to electrodes, which allowed researchers to monitor their stages of sleep based on brain activity patterns.

Researchers woke up some participants during NREM sleep, and awakened others shortly after they entered REM sleep. Immediately upon waking, participants filled out questionnaires and chronicled their nap-time narratives in dream journals. They also daydreamed (under supervision) for a few minutes and repeated the same questionnaires and dream-journal exercise.

Participants recalled both REM and NREM nap-dreams at a slightly higher rate of frequency than people typically remember nocturnal dreams. Researchers suspect the high-recall rate speaks to late-morning as peak circadian hours. Our bodies and minds are most "on" shortly before lunch. Otherwise, naptime REM and NREM dreams differed in the same ways they differ at night.

How did REM and NREM nap-dreams compare to daydreams? As researchers predicted, REM dreams were overall the most intense, emotional and vivid of the three experiences. Participants, however, rated daydreams as being nearly as emotionally intense, although more positive in tone. Researchers aren't quite sure why NREM dreams are so mundane, nor why daydreams, though highly emotional, tend to take a lighter, happier tone.

The study addressed another interesting question: How, if at all, do nap-dreams contribute to the critical process of memory consolidation that takes place during sleep? Basically, they don't know, but feel the issue merits future consideration.

For now, we're still confused about the relevance of time-of-day and state-of-consciousness when it comes to dreams, but we're getting closer to uncovering the similarities between the three.