Something that most people - even his political opponents - agree on is that President Barack Obama is a fairly gifted orator. On those occasions when he speaks extemporaneously, he still struggles with vocalized pauses - those lengthy "Uhhmmms" and "Errrrrs" - but in general, he can compose articulate sentences and typically does fine work with a prepared speech.

But is GRAMMAR, itself, in the tank for Obama? Apparently so, and all it takes to reveal this truth is a trip back to the most hated part of your middle school education: sentence diagramming. Below, blogger Garth Risk Hallberg diagrammed a sentence from Obama's recent press conference - coincidentally, his response to the question put to him by our own Sam Stein:

My view is also that nobody's above the law, and, if there are clear instances of wrongdoing, that people should be prosecuted just like any ordinary citizen, but that, generally speaking, I'm more interested in looking forward than I am in looking backwards. 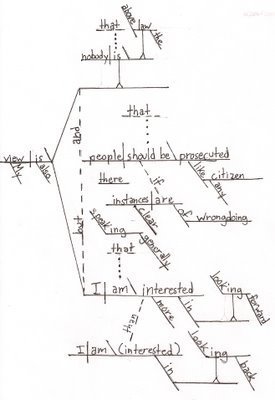 First, the elegant balance of the central construction (My view is that x, and that y, but also that z) shows that Obama has a good memory for where he's been, grammatically, and a strong sense of where he's going. His tripartite analysis of the problem is clearly reflected in the structure of the sentence, and thus in the three main branches of the diagram. (Turn it on its side and it could be a mobile.) The third "that" - thrown in 29 words into a 43-word sentence - creates three parallel predicate nouns. And then there's a little parallel flourish at the end: "I am more interested in looking forward than I am in looking back."

By contrast, the diagrams of typical George W. Bush sentences are indistinguishable from Google Earth closeups of small rodents, drowned in mud puddles. But watch out, Obamaphiles! Obama's grammatical structure reveals terrible, dark secrets as well! For starters, he uses "copulative predicates" - literally some sort of terrible word-sodomy! But even worse is this:

Notice the canny way that the sentence above turns on the fulcrum of what may be Obama's favorite word: "but." What appears to be a hard line - "My view is... that nobody is above the law" - turns out to have been a qualifier for a vaguer but more inspiring motto: "I am more interested in looking forward than I am in looking back." The most controversial part of the sentence - "people should be prosecuted" - gets tucked away, almost parenthetically, in the middle.

So there you have it! Watch for Obama to continue to hide "controversy" in the middle of parenthetical clauses, where only William Ayers, with his Chicago Machine education, can find them!