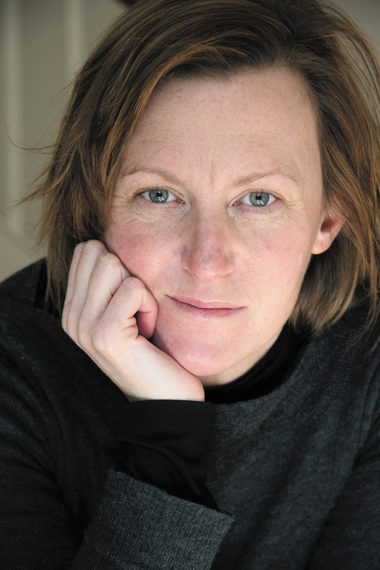 Gilly Macmillan grew up in England and lived in Northern California during her late teens. She studied art history at Bristol University and at the Courtauld Institute of Art in London. She has worked as a lecturer in photography.

What She Knew is her debut novel.

How one moment can change a life is at the core of What She Knew. Rachel Jenner, separated from her husband, is walking in a park with her eight-year-old son, Ben. She allows him to run ahead and Ben then vanishes. The police are called, search parties are formed, and a harrowing quest is begun to find the missing boy. It's a parent's worst nightmare, and the tension-filled novel depicts the police efforts and the media's role in the search. Rachel learns nothing is quite as she imagined it to be.

What She Knew is a compelling title for the novel. Can you tell us how it relates to the narrative?
What She Knew relates to a mother's intuition. It's about the things a mother knows about her child and their life together. It's the innate connection only they share.

What inspired you to write What She Knew? Was there an event or something you read somewhere?
I really wanted to write a psychological thriller because those are the books I most enjoy. I love picking up a novel and getting so engrossed I keep turning the pages until I'm finished. I was casting about for a subject, so I thought: what would be my own worst nightmare?

I'm the mother of three -- and I'd seen cases in the media where children had gone missing without a trace. I felt the loss of a child without any clear idea of what had happened -- whether the child was still living or had died -- would be absolute torture. That's what inspired it. I just couldn't imagine anything worse to happen to a parent.

You mentioned loving psychological thrillers. What do you think makes them so appealing and compelling?
I suppose it's the page-turning element of the novels that's so attractive. It's quite simply desperation to know what's going to happen to ordinary people stuck in extreme situations. It taps into all our fears. As safe as we are in our domestic environments, it just takes one moment to tip us over into a very difficult place.

Domestic thrillers tap into the realm of possibility, don't they?
Yes. These things can happen to anyone. And, that's what makes them so frightening. It could happen to you or me. It's personal.

Did you do any research or was this something that sprung from your imagination coupled with your writerly skills?
I did absolutely no research for the first draft. I had limited time to write the book before I had to get a proper job. I made a rule for myself: a thousand words a day and no research. I wrote the whole book from Rachel's point of view. When it was complete, I got an agent and she said we would have to pull it apart, structure it strongly, and back it up with research.

I spent six months taking it apart and reading as much as I possibly could about missing children. I also talked to two retired detectives who had worked in Bristol, which is the point in the narrative where I inserted the detective's point of view as well as Rachel's.

The novel has many lyrical passages. Who are your writing influences?
I read so widely. I've read voraciously since childhood. There are many influences. When I was writing this novel, I read a great deal of James Lee Burke's novels. In particular, I read The Tin Roof Blowdown, which I think is a perfect book. He combines the crime genre with beautiful writing. I would have to say he was my inspiration.

What She Knew could have ended in many different ways. How did you decide on the ending?
I wrote three different endings.

I wrote the one I initially preferred in the first draft, but. I think I liked my characters a bit too much. My agent said it wasn't dark enough, so I rewrote it for her before we submitted it to publishers. This time, it was much darker. Thankfully, once my publisher in the UK bought it, she said the ending was too dark and asked it be softened. We ended up with something I think is a more truthful conclusion than the other two.

Social media play a large role in What She Knew. Will you talk about that?
I didn't have social media in the first few drafts. The more I researched, the more I realized to make it realistic,, social media would almost have to become a character.

So many of us only experience these kinds of cases through what we read on line, where they take on a life of their own. Social media conjure up our worst nightmares and provoke extreme reactions from some people. In some instances, you can even see a lynch-mob mentality develop through social media. I watched some real-life cases unfolding as I wrote the book. It was precisely what happened, so I tried to make the novel accurate.

How does Rachel evolve during the course of the novel?
I think Rachel goes from being someone who lets things happen to her to someone who learns she must act alone at times. She becomes a much more proactive person. She'd been a bit of a victim early on, but by the end of the novel, she has quite a bit more strength.

Earlier, you mentioned getting a 'proper job.' Are you now writing part-time or full-time?
I'm now lucky enough to be a full-time writer.

What's coming next from Gilly Macmillan?
Next is a book which in the UK will be called The Butterfly in the Dark. It's another psychological thriller about a teen-aged girl who's a prodigiously talented musician, but who made a terrible mistake in her past. She's just attempting to rebuild her life, when at the beginning of the book, her piano concert is interrupted by a man. The story kicks off from there.

Congratulations on writing What She Knew, a beautifully written, deeply probing psychological thriller capturing a mother's anguish and a police officer's torment in the face of a life-altering incident impacting many people.