I am not really a major cryer. I mean, don't get me wrong, I cry -- when it's appropriate to do so. Funerals. The occasional wedding if it's particularly beautiful or meaningful. Schindler's List. Things that normal people cry at. I am definitely not an over-cryer. I don't cry at commercials or cheesy Hallmark movies or at the drop of a hat. And, when I do cry, there's usually a beginning and an end. I cry. I get it out. I stop. Normal crying.

However, since I first started to understand the magnitude of what happened at Sandy Hook Elementary School on Friday morning, I have cried a lot. I cried when I heard the terrible news. I cried when I went to pick my son up early from school. I cried when I told my husband what had happened. I cried when I talked to my girlfriends about it. I cried at church when we prayed for each victim by name. Off and on for going on three days now, I have cried. And this is despite going out of my way to not watch anything about it on TV or read too much about it online. I'm actively trying to avoid it, but I still find myself crying more than usual.

I mentioned this to a friend last night and she said that she couldn't seem to stop crying either. When I asked her why she thought that was, her answer was, for me, a revelation. She said, "I think it's because we know what six looks like. We see it every day... in all its glory." And she was right. Because, you see, this friend and I both have a six-year-old child. I, a six-year-old son. She, a six-year-old daughter. Both are in first grade. Both, I imagine, so heart-breakingly similar to those 20 kids who were so brutally and senselessly killed on Friday morning. And we do, indeed, know what six looks like. We do see it every day. In all its glory. We see the good, the bad and the ugly. The beautiful and the infuriating. It's in our face. We live it and breathe it.

We know what six looks like. We know what it smells like. How it can go from the fresh scent of shampoo and soap to the musky aroma of "dirty child" in what seems like minutes. How it resists getting in the bathtub... and then resists getting out half an hour later. How sweet its hair and skin and clean jammies smell when it sits on your lap and asks you to read it a bedtime story. We know the unmistakeable fragrance of the occasional accident in the middle of the night caused by too much milk and no last-thing-before-bed visit to the toilet.

We know what six looks like. We know what it sounds like. How it cries and whines. How it sings and laughs. How clever it is and how much more clever it grows every day. How it sounds out words on signs as we drive past in the car and how happy it is when it gets them right. How annoying it sounds when it teases its little sister and how kind it sounds when it soothes her when she falls down and hurts herself. We know how lovely the words "Mommy" and "Daddy" and "I Love You" sound in its six-year-old voice.

We know what six looks like. We know how it tastes. How picky it is. How it thinks chicken nuggets or macaroni and cheese are gourmet foods. How much it loves candy and cookies. How it tolerates broccoli and carrots. How it absolutely abhors Brussels sprouts. How it thinks French fries are a vegetable. How it thinks chocolate milk was created by God himself. How it thinks pizza is its own food group. We know that six is happy when it finds "I love you!" written on a napkin in its lunch box at school.

We know what six looks like. We know how it feels. How big it's getting. How fast it outgrows its clothes and how it's no longer a baby, but not quite yet a big kid. We know the weight of six in our arms. How we can barely carry it anymore, but try anyway because we can't quite bring ourselves to accept the truth. We know how easily six gets its feelings hurt if someone says just the wrong thing or if this friend or that one doesn't want to play with it or it gets in trouble at school. We know the velvety softness of six's skin. We know the still-silkiness of its hair.

Yes, we know what six looks like. We know six's gap-toothed smile and its gangly arms and legs. We see how it jumps and dances. How it twirls and runs. We know how funny six is. How absolutely charming it can be. We know six's terrible jokes. We know how obsessed it is with "Minecraft." We know its crooked "S" and its backwards "3." We see how it teeters on the cusp of the world of books and all the joys of reading, but how it's not quite ready to fall in yet. We see how six can't decide if it wants us to stand beside it or not. We watch it take two steps towards independence and one step back towards us every day. We know how sturdy and strong six is... and yet how frail and fragile.

We know what six looks like and can only in our worst nightmares imagine how devastating its loss in this senseless and evil way would be. We can only barely imagine the wreckage and the despair and the utter hopelessness that would be left if six were brutally and suddenly taken from us. We know we couldn't bear life without it.

Yes, we know what six looks like. And we know that, to us -- like it must be for those other mothers and fathers in Connecticut -- six is the whole world. 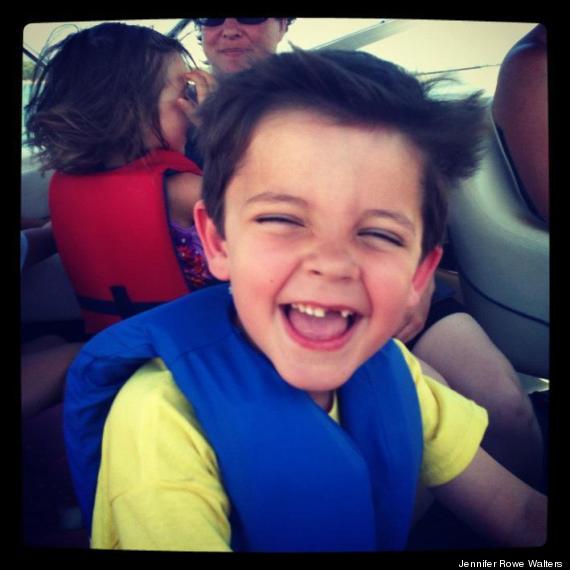 This piece originally appeared on Real Housewife of Cleveland County.

More:
newtownnewtown-elementary-school-shootingParentsnewtown elementary schoolschool shooting
Newsletter Sign Up
Raise the kind of person you'd like to know
Subscribe to our parenting newsletter.
Successfully Subscribed!
Realness delivered to your inbox