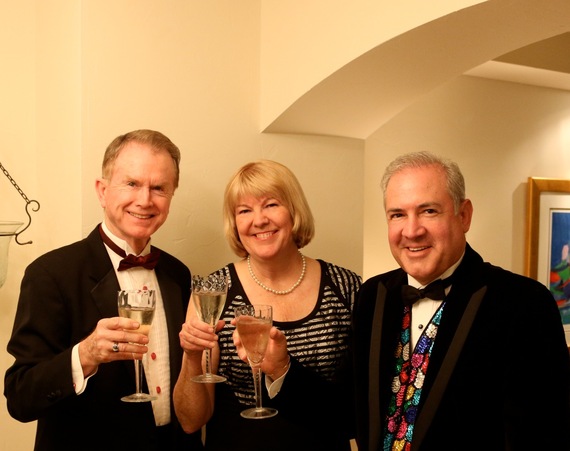 Every February it's normal to think about relationships. Regardless of how we judge it, Valentine's Day can be a great reminder of the importance of love and connection in our lives. This year, as I began exploring ideas about quality relationships, I came across some interesting research in the area of gay and lesbian couples. Of course, as should be expected, same-sex relationships often struggle with many of the same challenges we all face on the path to love and happiness. But, interestingly enough, gay and lesbian couples also tend to have some qualities and strengths that could teach straight couples about creating a good relationship.

The most impressive information about gay and lesbian relationships comes from the world-renowned relationship guru John Gottman and his wife, Julie Schwartz Gottman. John Gottman primarily has been studying marriage stability and divorce prediction in all couples for over 40 years. Of particular importance are the four qualities he believes are the most destructive and biggest predictors of divorce and separation. Called "The Four Horsemen of the Apocalypse," it is said that by watching for these signs during a three-minute video of a couple, Gottman can predict the likelihood of a couple divorcing nearly 94 percent of the time.

What are The Four Horsemen? They are:

And even though healthy relationships might use some of these on occasion, a relationship headed for trouble, be it gay or straight, will contain these horsemen a majority of the time. In addition to the Gottman's contribution to the signals that predict unhappiness, separation and divorce, the Gottmans also began " to learn what makes same-sex relationships succeed or fail." In a study, co-authored by UC Berkeley professor of psychology Robert Levenson, a key finding was that the overall quality and satisfaction of all couples, (straight, gay or lesbian) were about the same. And while those findings point out that gay and lesbian relationships are comparable to straight relationships in many ways, same-sex couples do have social and legal barriers that are unique to their situation that influence their relationships.

Fortunately, gay couples typically have a couple of relationship strategies to help. When in conflict, gay/lesbian couples generally:

As might be expected, interesting differences between gay couples, lesbian couples and straight couples also exist. The study says, "For lesbians, affection was more important than it was for gay males, while for gay males, validation was more important than it was for lesbians." In addition, individual autonomy plays a bigger role in gay and lesbian relationships. And an obvious difference, especially prior to the right for same-sex couples to legally marry, with fewer obstacles to leaving or dissolving their relationships, they very often did.

But one other trait also points out an advantage that most gay couples experience that many straight couples don't. That difference concerns power sharing, equality and fairness in the relationship. A big part of the power that exists in any relationship is the ability of one partner to influence and advance both the state and the goals of the other. In other words, if either partner has a lot more power over, and is much more influential than the other, the relationship will deteriorate. The more out of balance, the more the relationship feels unfair.

What makes a relationship fair? Primarily, it is a sense of mutual respect. Also included is an equal division of labor, joint decision-making and particularly the right to speak up. It isn't really necessary that every aspect of the relationship be handled 50/50 or judged by others to be "fair." What matters most is that both people in a relationship feel equally respected and influential.

Lurking behind many of the problems most straight couples face in the area of inequality come from cultural (including religious) assignment of gender roles. No matter how progressive, the majority of straight wives take on the larger responsibility of children and home, while most husbands go to work. On the other hand, author Liza Mundy says in her article in The Atlantic:

Same-sex spouses, who cannot divide their labor based on preexisting gender norms, must approach marriage differently than their heterosexual peers. From sex to fighting, from child-rearing to chores, they must hammer out every last detail of domestic life without falling back on assumptions about who will do what. In this regard, they provide an example that can be enlightening to all couples.

What it appears to come down to is that as Mundy says, "...gay and lesbian couples were fairer in their dealings with one another than straight couples, both in intent and in practice." Rather than fall into cultural or religious norms as many of us do unconsciously, gay and lesbian couples must come to a mutual agreement about the details of their lives in order to stay together. That includes seeing each other as a partner rather than an appendage, negotiating all responsibilities a relationship requires and even what they will call each other when out in public. Conversation, equality, negotiation and a willingness to create something new -- not because you can, but because you want to -- is something every straight couple could learn from same-sex couples.

After 38 years together, Thom and I are proud to say we have several happy and committed gay and lesbian couple friends in our lives. Some of them have been together as long as we have, although they can't claim the same number of years in marriage for obvious reasons. Of course not all couples make it, straight or gay. But when any relationship radiates love, commitment and caring, it's SMART to pay attention and learn whatever we can about how to make our own even better.