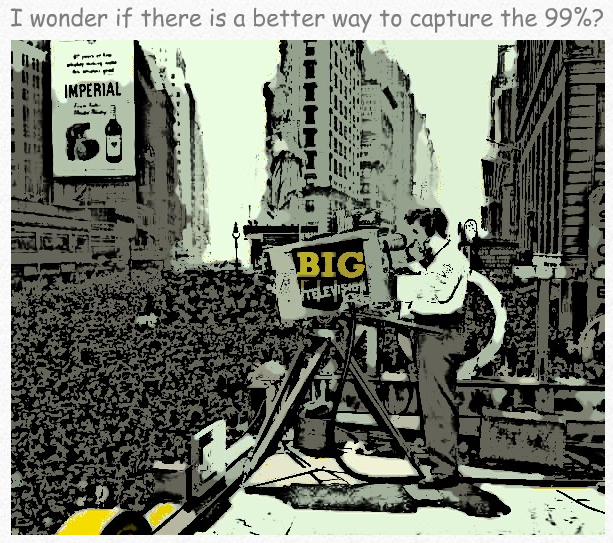 What can the mass media 1 percent learn from the digital 99 percent?

While big media and other critics slam Occupy Wall Street for lacking a cohesive message,
the movement continues to just get on with things, including its own media, innovating in the
process and providing a case-study for excellence in editorial, production and broadcasting.

If TV execs aren't taking notes, they would be wise to get out their stenographers, because
now's a great time to mimeograph a digital manifesto for the team.

In his article "Innovation and Imitation in Commercial Media," Middlebury College Associate
Professor of Film & Media Culture Jason Mittell writes: "Creating commercially successful
mass media involves a delicate balance of offering something familiar along with something
new, an alchemy of innovation and imitation."

But what today's audiences get is more like the bad chemistry of eyes wide shut. Big media is
turning its back on both the news that matters most and the best means to deliver it.

For an excoriating attack on broadcasters' failure to innovate, check out the CNET profile
of Gary Shapiro, head of the Consumer Electronics Association. A summary of his take
on broadcasters: "For decades they haven't been creative, and they've been resistant to
changes in technology. And they get a phenomenal amount of money from what they do. For
years they've basically controlled Congress."

What's up with that? Recently, I was at Zuccotti Park, Occupy Montreal, The International
Emmy Awards and NBC's 30 Rock Plaza all in the same few days. The digital divide was as
striking as any other. Today, it seems that the media splits unevenly into the "haves" and
the "have apps."

"What you are seeing is the culmination of social media, citizen journalism and what I
call 'small technology,' a cell phone and a hotspot," says Henry Ferry, who together with Tim
Pool launched a primary source of independent media www.theother99.tv on day one of
Occupy Wall Street -- and hasn't looked back.

"I don't think that mass media know what to do with this and I am surprised that they haven't
found a way to take [these productions] and at least package them as their own," he says.
It is not as if this stuff is so new, notes Ferry. But it is far from mainstream. "You'll know it's
jumped the shark when a big company does it."

Obviously, when it comes to decentralized movements, digital media is mission-critical. But
if media is your core business, isn't there even more of an imperative to get with the digital
program? North American broadcasters with their incessant restructuring are particularly
vulnerable to stagnation, as with every shuffle their digital brain trusts go back to ground zero.

Meanwhile, as mass media risks continuing to drone on about the uncertain value of digital
media, radical media is deploying actual drones to capture current events in real time.

Cleverly making and delivering media from the front lines with their live streams and cells,
The Other 99's Ferry and Pool are currently upping their game with the use of an "AR Drone,"
a low observable flying machine with a high-quality wireless web cam easily controlled from
the ground with a phone. Sold in orange and green at Toys "R" Us for $298.99, but sadly out
of stock right now for Christmas and broadcast networks, these gaming toys (the AR comes
from "Alternate Reality") make ideal electronic newsgathering devices.

The idea for using a drone, says Ferry, happened when early reports suggested that the
NYPD closed the airspace above Zuccotti Park. (In mid-November, WCBS and other media
companies believed they had been ordered out of the sky in a media blackout designed to
prevent choppers from taking aerial shots of the Occupy scene. While high-priced, high-flying
media helicopters did turn tail, the NYPD and FAA have since denied this edict and chalked
it up to a media misunderstanding.) Now with a toy that flies at 400 feet, and financed by
donation, Ferry says he can stay on the right side of the law and FAA regulations, while still
delivering powerful aerial coverage at rock-bottom costs.

Another regulatory environment could facilitate a détente between big media and its frenemy,
the participatory audience. "Changes to FCC and CRTC guidelines mean no more 'broadcast
standards'," notes Roger Williams, CEO of Image Media Farm, which specializes in real-time production of massive live events and rents broadcast equipment to news and sports
networks. Broadcasters and broadcast technology manufacturers can now look to consumers
for best practices in production, editorial and transmission, he says.

At the bleeding edge, these "consumers" are actually the digital revolutionaries, the activists
on the front lines of the Arab Spring and the Occupy movements who produce on the run and
transmit on a shoestring, reaching massive audiences with often with nothing more than a
phone.

"When we talk of these so-called revolutionary innovators we are referring to your average
Internet 'addict,' which these days means most of us," says Sandra Larriva Henaine, co-
author of the new book Revolution 3.0, a series of profiles on the power of the Internet as an
agent of change.

We are the digital 99 percent.

"We post interesting images or videos on Facebook, we tweet breaking news on Twitter, we
e-mail links to our friends, we download podcasts onto our phones and we prefer getting
our news digitally. These are all factors that media outlets these days have had to take into
consideration in order to survive," she says.

While mass media may continue in survivor mode largely kickin' it old school, digital media is
turning to Kickstarter for financing innovation.

An online funding platform for creative projects, "Kickstarter is the ultimate dog and pony
show," according to Christos Sourligas, writer and director of the world's first feature film shot
entirely on the iPhone 4. "Fed-up innovators are tired of waiting around for government or
venture-capitalist hand-outs, and have taken to the streets in order to get their messages
across. Except that the street has now come to the laptop."

"The Arab Spring and Occupy movements have shown us that social media and cell phone
technology works!" says Sourligas, whose indie movie "Happy Slapping" was shot on iPhones
by the actors themselves. Except for sound recording, the only mechanical costs were for the
smartphones. The total budget for this 90-minute movie: $250K. "When projected on a big
screen, you can't tell the difference between this film and any other film shot on high-definition
cameras that cost hundreds of thousands of dollars," he says. And his distribution strategy
aims to capture the smartphone audience, with a day-and-date theatrical and mobile content
release, following his earlier premiere at the Montreal Film Festival in August.

Fan-funding is also part of Occupy's advertising. With Loudsauce, a site for crowd-financing
TV commercials and other campaigns, movements can underwrite the purchase of expensive
airtime. Conceivably, digital revolutionaries can now get their content on air through an ad-buy, if not an editorial window, and supported entirely by audience dollars. When valuable
television content becomes advertising we want to watch, big media risks a double by-pass.

Unlike print media, which presents itself in perpetual crisis mode and can always use turmoil
as a reason not to innovate, world TV revenues reached a healthy $375.5B in 2010 and are
expected to grow to $460.9B by 2014. So if tech is cheap and TV revenues are up, then
where is the patently evident R&D?

"One of the best places we go [for digital inspiration] is to talk to recent college grads,"
says Tim Gaughan, CBS director of digital news gathering and special events. He notes
that CBS's digital advance has accelerated over the past two years, with "Twitter as the
best CBS example of digital media -- bringing in audiences, listeners, viewers and adding
another screen." Gaughan says that while CBS does watch Occupy's use of social media, it is
to "monitor the way that protesters are organizing" not for digital competitive intelligence.

Chances are if you are rich, you are not hungry, a maxim that might also apply to big media
and its impetus to innovate. Under the sky, the drones, the foreclosed homes, Digital Occupy
eats its lunch.