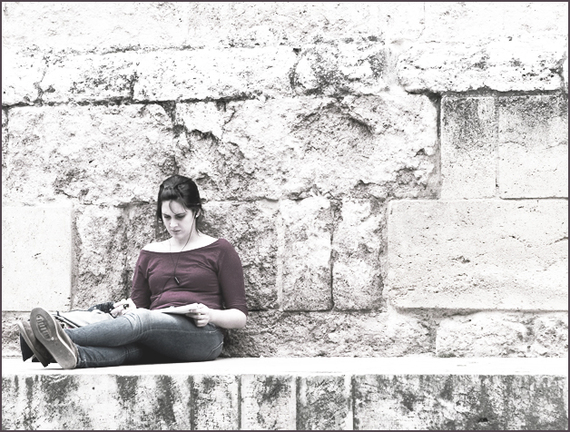 Lines have been drawn, sides taken; articles, blogs and editorials prognosticate about what -- and whom -- will be left standing when the dust settles. Big 5 authors are stamping their feet in step with their publishers and it's getting noisy out there. Uber-successful author James Patterson is fuming about the "national tragedy" that is Amazon (as quoted in the Los Angeles Times piece, "Amazon and Hachette: The dispute in 13 easy steps"), while another high-profile writer, Malcolm Gladwell, opines in the same piece (in oddly vulnerable tones), how heartbreaking it is "when your partner turns on you." It's high drama in the literary corral.

USA Today's Michael Wolff frames the melee in his piece, "How book biz dug its own Amazon grave," as a transparent "power grab" by Amazon that should have set off alarms much earlier... but didn't:

"...Amazon, evident to anyone paying the slightest attention, is a creeping totalitarian state. Its effort is to build a marketplace that will give it the most power to shape the behavior of its customers and suppliers. That is pretty much the definition of 'platform,' that new word that denotes ultimate commercial and personal control. [...]

"So, broadly, the fight is between, on the one hand, the incompetents, craven panderers and mid-level corporate bureaucrats in the book business and, on the other, the authoritarian creepos at Amazon. More specifically, the fight is about better and lesser businesses' acumen and strategies. [...]

"The negotiation, not to mention brinkmanship, between Amazon and Hachette seems vastly too unequal. Publishers need Amazon more than Amazon needs them. So publishers are screwed. The walking dead. They gave it away."

Evan Hughes over at Slate appears to largely agree with Wolff. In "Bringing Down the Hachette," he makes the point that this battle was essentially allowed to get out-of-control by those not paying attention and is now, belatedly, inspiring an almost hysterical level of response from those who will be most affected -- Big 5 publishers and their authors. He even concludes mournfully, "How do you notice a great book that never gets written?"

It's a fascinating debate, a fascinating time, one that mirrors much of what's already happened in the music industry, in journalism, art and photography; even online news aggregation. And, as in all revolutionary movements, the paradigm is shifting, to use a weary phrase. The status quo has been shaken up, with elites at the top of the food chain being toppled by the democratization of the publishing process, whether by scruffy rebels who've finally had enough of never having enough (or any, for that matter), or, in this case, by another corporate "elite," one that's had the audacity to design a business model that actually includes those previously kept outside the gates: the independent writers of the world. And, believe me, those writers, unlike the rich, famous ones long held in the warm embrace of the Big 5, view this debate through a very different filter. We are celebrating Amazon's open doors.

Unless you're someone who writes books and attempts to get them published, it's unlikely you're aware of, or pay much attention to, the arcane process by which books come to market. As a reader who goes to bookstores or shops online -- at Amazon or any of the other sites where books are sold -- you likely make little note of the publisher's name, more interested in the author, the name and genre of the book, the cover, the book description, and the reviews. But for the writers of those books, the journey to that book shelf -- virtual or otherwise -- has been, until Amazon, a gauntlet of restrictions, exclusions, and endless hoop-jumping, followed, most frequently, by rejection, dismissal, and, in too many cases, lack of even an acknowledgement of your introductory email or letter. There cannot be a less considerate, more brutal, process than the one required to simply gain the attention -- much less the interest -- of a literary agent, a step necessary if you want to approach Big 5 publishers. And while I have sincere empathy for those agents who are, no doubt, overwhelmed by submissions from the millions of writers looking for that representation, the entire process is set up to drive pretty much everyone involved f**king crazy. Agents try to preempt the seeming cruelty of their perceived coldness and disinterest by noting on their sites that they're too busy to respond to anyone but those in whom they're interested, but still...

A few lucky writers do get through -- you might have one of their books on your nightstand -- but even those are being rudely awakened to the new reality of far less marketing and promotional help from big publishers who, regardless, still control what their books will be and still take a big chunk of their profits. Other authors decide to go with smaller publishers who have little money to spend on anything but at least have a masthead. But for most writers this "auditioning" process can go on for years, during which time they edit, rewrite, and polish their manuscripts but, in most cases, see little progress in the quest to get them traditionally published.

I wrote a bit about this spinning journey in my piece, "Is Self-Publishing Killing Books? My Journey With After the Sucker Punch Answers the Question," so I won't reiterate beyond the obvious: When an industry becomes too exclusive, too restrictive; with contradictory standards, inexplicable or confused reasoning, and the inability -- or wherewithal -- to be open to much beyond the most obvious, the most predictably commercial, or the most connected, a revolution is going to happen. As it has.

While Big 5 and their gatekeepers were holding tight to their velvet ropes, Amazon opened their doors wide, giving independent authors of every ilk a place to publish, market (often with Amazon's help), and sell their work, and, consequently, giving millions of readers the opportunity to buy it. As much as the naysayers bemoan this "muddying of the waters," the fact is, books are not declining or becoming more generic because of Amazon; they are, more likely, expanding, with many new, talented writers finally getting an audience, one delighted to discover new work in, perhaps, a wider range of genres and styles than traditional publishers were willing to service. Some may sniff that self-published writers are a scruffy lot cranking out bad romance novels with sloppy manuscripts, amateur covers, and marginal skill -- and some are. But there are also many who are remarkably talented, know their craft, and implement their impeccable standards with professional editors, formatters, and cover designers. Some of those writers are bestsellers. Some are famous. And some, like me, invite you to read our books now being independently published at Amazon to see just how they stack up against the "traditionals" (my book link is below... please, avail yourself and let me know; I'd be delighted to get your feedback, seriously!).

When Slate's Evan Hughes posits, "How do you notice a great book that never gets written?," his concern might be more applicable to the writers big publishers have been ignoring for years. Their books are, now, not only getting written, but finally getting noticed, thanks to that "national tragedy" that is Amazon. Whatever this behemoth is or isn't; whatever it's doing right or wrong, all I know, after years of jumping through endless hoops in hopes of getting my work acknowledged, I'm done jumping. I'm putting my creative ass on the line, standing by my work, and selling my book on Amazon. As are millions of others.

For those of you raging, I hope this gets worked out to the benefit of the most worthy; in the meantime, we independents are marching with the revolution.