Mark Zuckerberg, co-founder and CEO of Facebook, and his wife, Dr. Priscilla Chan, publicly announced on Tuesday a plan to give away 99 percent of their Facebook shares to build a better world for their newborn daughter, Max.

The pledge -- about $45 billion in current value -- means more than just helping their daughter. Chan and Zuckerberg endorse the remarkably altruistic notion that "all lives have equal value, and that includes the many more people who will live in future generations than live today."

They also share an epistemic humility increasingly common in Silicon Valley. Rather than committing to specific cause areas, they cite the broad goals of "advancing human potential and promoting equality." This could allow the new Chan Zuckerberg Initiative, founded in 2009 to distribute the couple's donations, to have substantially more impact than if it were precommitted to any particular area.

This cause-neutral perspective is shared by the "effective altruism" community, a growing movement that puts a name to the sort of reasoning used by Chan and Zuckerberg, starting from a broad goal like advancing human potential and whittling that down to specific strategies. It combines the heart and the head to help philanthropists, nonprofit workers like myself, and others build the best world we can.

Many in the effective altruism community have given substantial thought to which cause areas best satisfy this general principle of doing the most good. One framework we use is scale, tractability, and neglectedness.

Scale just captures the size of an issue. Tractability is whether we can make significant progress on the issue given some realistic amount of resources. And neglectedness measures how many others are working on the issue, so whether there could be high-impact opportunities not yet taken.

Unsurprisingly, many of the most promising causes involve focusing on the most marginalized populations. The first that comes to mind for most people is the global poor. Americans tend to overestimate the amount of spending on foreign aid, when it actually makes up less than 1% of the federal budget. By zeroing in on the most effective anti-poverty charities as identified by the charity evaluator GiveWell, you can save a life -- indeed, if you give enough, you can save many lives over the course of your life.

GiveWell has also partnered with Good Ventures, the foundation of Cari Tuna and Dustin Moskovitz, who co-founded Facebook with Zuckerberg. Together, they are leading the Open Philanthropy Project, which seeks to answer the question, "How can we accomplish as much good as possible?"

One of the cause areas identified by the Open Philanthropy project, helping animals in industrial agriculture, deserves special consideration. This cause is woefully neglected. Animals and the environment receive only 3% of U.S. charitable spending according to Charity Navigator. This might be surprising, given the overwhelming concern Americans have for their animal companions. Indeed, according to a recent Gallup poll, 32% believe animals deserve "the same rights as people."

Organizations that focus on farmed animals, who make up the vast majority of animals used by humans, receive only a tiny fraction of this funding.

These animals suffer immensely and, of course, ultimately have their lives taken from them. Abuses include gestation crates that prevent mother pigs from even turning around and practices like the mass slaughter of male chicks in the egg industry, who are frequently thrown into the trash or meat grinders while still alive.

But progress can be made. 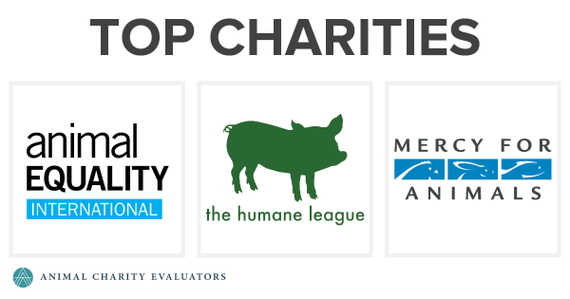 Photo: Mercy for Animals, Animal Equality, and The Humane League have each earned the Top Charity certification from Animal Charity Evaluators multiple years in a row.

At the consumer level, thanks to the advocacy of organizations like Mercy for Animals and Animal Equality, people are growing increasingly opposed to this system, as a host of recent investigations have made it clear this cruelty is standard practice across the animal agriculture industry. Data suggests consumers are increasingly choosing vegan products over the animal-based alternatives.

Finally, organizations like The Humane League have been hugely successful in inspiring companies to change their animal welfare policies, such as the adoption of cage-free egg policies by Sodexo, Compass Group, and Aramark, the three largest dining services companies. These policies, while there is still a long way to go, have made significant improvements in the lives of many farmed animals with a relatively small budget. In 2014, The Humane League spent just under $600,000.

Just a small portion of the funding from the Chan Zuckerberg initiative could spark huge changes in our food system. In addition to funding advocacy organizations, they could surge forward the development of ethical food products, such as cultured meat, by funding organizations like New Harvest or The Good Food Institute, leading to billions of sentient beings spared from the terrible fates in animal agriculture.

They could fund organizations like The Nonhuman Rights Project that work to establish legal rights that could lay the groundwork for stable laws and policies ensuring humanity treats these animals with kindness and respect. I strongly encourage Chan and Zuckerberg to consider these options, as more funding in this area could do incredible amounts of good.

When Max Chan Zuckerberg and other newborns today grow up, they shouldn't have to live in a world where we abuse so many of the sentient creatures that share this planet with us. They should know that our generation did more than realize the wrongfulness of our current system. They should know that we took action and built a better world for both our children and the animals because we truly believed that all lives have equal value.