The widow sitting next to me on her couch seemed to disappear into the cushions as she petted her Bichon Frise Max for the last time. He was terminally ill with kidney failure, and she had called upon me as a home-visit veterinarian to come to her house and help Max cross over peacefully and gently. "I'm so sorry," she said as the pile of tissues grew into a tower. "I wasn't even this upset when my husband died." She paused. "He's the one who bought Max for me."

The depth of her grief was shocking to her, as it is to so many of my clients. The death of an elderly pet is not unexpected. That's the deal with pets: They come, they worm their way into our hearts for a decade or so, and then they depart, taking a piece of our hearts with them. But why is it that a woman who calmly sat at her husband's hospice bed a year ago has come undone when her dog is dying?

Pets are so much more than animals who slink around the house and make a mess, at least to those of us who enmesh them in our lives and consider them family members. They are companions, solace, and entertainment.

And the more time I spend hearing families' personal stories, the more I see that each pet serves a unique purpose at a point in our lives, a task that defines their all-too-brief time on Earth. Oftentimes we don't even recognize that task until the moment has already passed.

In April of this year, my mother was diagnosed with Grade IV glioblastoma, widely considered one of the most terrifying types of brain cancer one can have. As a nurse, she understood that even with treatment, the prognosis was grim, and she decided very soon after the diagnosis that she did not want to undergo daily radiation and chemotherapy.

I had to rely on every bit of experience I had as a hospice veterinarian who gave people permission to say "no" to aggressive therapy for their pets to help my mother do the same thing. She knew her time was limited and had no interest in spending it staring at the fluorescent lights of a hospital room ceiling. She'd rather spend it on the patio, watching the hot air balloons drift by at sunset.

When Mom was discharged from the hospital into hospice care, she and my father moved into my home so I could help with her care. My goofy Golden Retriever Brody was thrilled to have so much company, but I was apprehensive. Although he was five, he thought he was still a puppy, and had a bad habit of bowling enthusiastically into newcomers, wagging his entire caboose with such enthusiasm that the visitor's body would vibrate in time with his tail. Mom was wobbly due to her brain tumor, and I worried at the idea of him knocking her over. 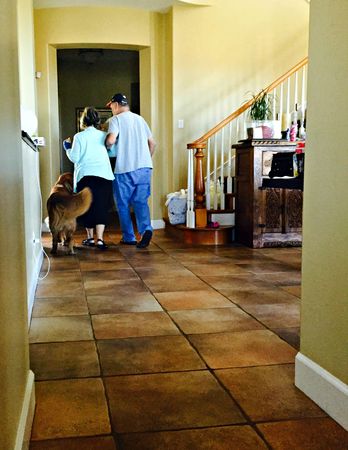 From the moment Mom and Dad arrived at the house, Brody changed. Sensing a change in the atmosphere, he attached himself to my parents, and when Dad gently held her hand to walk down the hall, Brody would glide up to her other side to prop her up. I barely saw him in the two months Mom remained with us, such was Brody's insistence on remaining by her side, resting his head on her lap while she patted him and said, "What a good boy," in an increasingly faint voice.

When hospice nurses arrived with medications, syringes, and other reminders of her impending death, he would curl up next to her on the couch while her foot tapped nervously on the floor, licking her until her toes slowed their anxious drumming.

She died at sunrise on June 3, with Brody by her side. 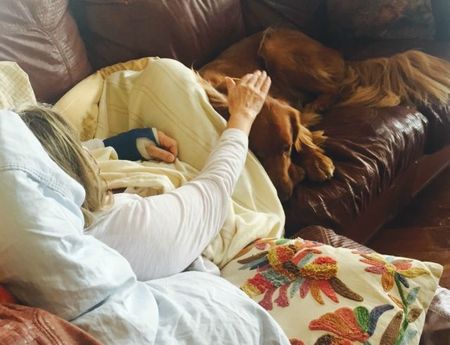 And that, I think, is why so many of us have trouble describing to others why we are so flattened when a pet dies. We mourn not only their loss, but the passage of time and the moment they represented. My lovely client was saying goodbye not only to Max but the last breathing reminder of her husband's love. When Brody dies someday long in the future, I know I will close my eyes and see Mom's tiny hand resting on his head, outstretched for the time we might someday meet again.