From 2005 to 2006, the first year of my daughter's life, I was warned repeatedly that being a formula-fed child would diminish my gal's entire future, making her fat, slothlike, dim, equipped with an immune system that practically summoned infection, and unattached emotionally to her parents. The American Academy of Pediatrics and the World Health Organization were both on a crusade to boost breastfeeding rates, and it was impossible to ignore the implied threat: formula babies are screwed. 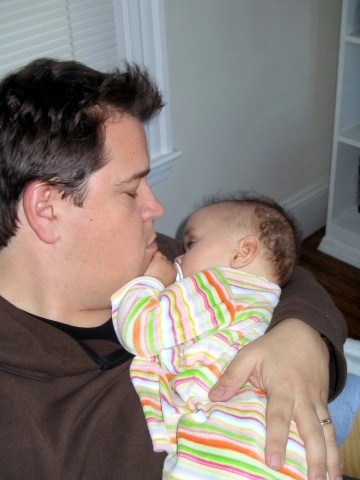 The headlines of that era -- "Breast-feed or Else!" "Formula Doubles Infant Deaths!" -- felt a little like Donald Rumsfeld's post-9/11 color codes, a kind of terrorism in themselves, with dire outcomes predicated on sources I couldn't examine firsthand.

Though our pediatrician wasn't worried a bit about my daughter, it seemed like everyone else was: parent magazines crowed about the need to breastfeed (despite running ads for formula); online parent forums held open season on the selfishness of people who wouldn't breastfeed; and I knew formula moms who had been blatantly harassed by some of La Leche League's less well-trained members.

I tried to shake off the formula-shaming, even as it added layers of worry to my already tired parent-of-newborn mind. It's not like there was anything else I could do about it: I had no breasts, and neither did my husband.

Gay dads like me, straight dads parenting alone, women with a physical inability to nurse, grandparents acting as caregivers, foster parents, parents of infants who cannot suckle, and more -- there are thousands of people every year tasked with the care of newborns for whom formula is a must. Whatever the cause, it's no picnic to defy the accepted wisdom of your time, especially when you are surrounded by a population being trained to rattle off all the "facts" about how much your child will suffer as a result.

The only consolation I could take at the time was that as my daughter outgrew formula, there was no hint yet of the most commonly-cited expected outcomes; in fact, she was fit and active, the first to walk of all the kids in the moms' group I'd joined, and she pretty much managed to skip all the ear infections and stomach bugs felling her playmates. The only kid in the group who could keep up with her at the time was a boy named Kaelen -- and he was a formula baby, too.

Flash forward to the present and the breastfeeding-versus-formula smackdowns are more tempered. Today, the parlance is less harsh and tends to allow that formula doesn't have to be a terrible thing, though it is still less desirable. As one pediatrician puts it, "There is a world of difference between 'best' and 'the only choice of right-thinking people.'" But the same old claims still get trotted out, despite the increasing number of studies that suggest that the "facts" don't show a marked difference in most areas, and the differences that do appear may be based on other factors entirely. Give it a few years and yet newer studies may rewrite the wisdom again.

Since questionable science seems to be the lingua franca of those debating this topic, I will give you the results of my own very small study, with a sample of two. I'll start with breast milk-deprived Kaelen, now 9. His mom reports her healthy son is social and creative, adept at soccer and swimming, fluent in two languages, and academically on target for his grade. As for my daughter, she plays soccer, does martial arts, and can bicycle for miles; she reads 500-page books and makes journal entries about marine biology, her favorite subject; and, frankly, I envy her immune system.

So for caregivers like me, who cannot breastfeed (or who choose not to), I am happy to report that my girl is bright, active, and bonded with her parents, not because formula was magic but because it kept her well-nourished through that year when there was no one to breastfeed her. Whether our path was "best" or "second best" is a moot point; the one truly provable long-lasting outcome of formula for my daughter is this: her life.

Love in One Photo
More:
HealthParentsbreastfeeding-monthdaughtersDads