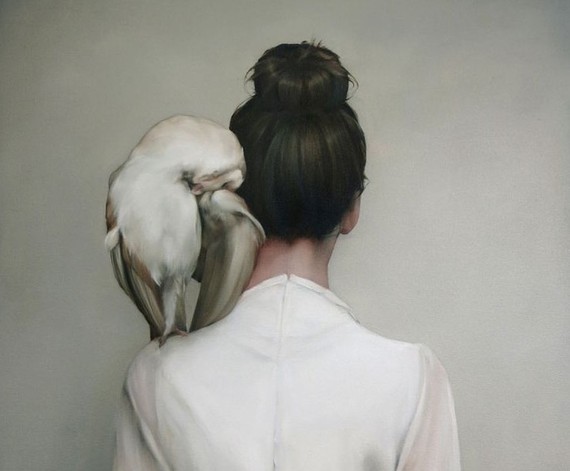 I was going to speak to angels. I had never been much interested in that particular branch of the spiritual path -- the esoteric, the crystals, the angels and the tarot decks. But something was calling me and I tentatively signed up for Amy Oscar's Soul Caller Circle.

I knew I had wisdom in me, but to me it had only ever been about listening to the voice of my heart.

Anything beyond that felt like magic. Speaking with angels, receiving guidance from divine beings, and being able to "read" other people's energetic information and so on. I wasn't skeptical in the sense that I didn't believe it could be done -- I believe pretty much anything is possible -- I just didn't believe that I could do it. I didn't dare believe it, although something in me trembled with joy at the thought of connecting with the world in that way.

"The angels want to speak to you," Amy said. "They're just waiting for you to listen." She encouraged us to ask for proof. "If you find that you are skeptical, or that you don't get it, ask for proof. Ask them to give you a sign of their presence that you cannot misinterpret. Ask again and again until you feel convinced."

She said a common sign was feathers, and participants were finding feathers en masse, in the strangest locations. I didn't. I didn't even ask for a sign, actually. I just kept with the curriculum, did the meditations, and secretly feared that I didn't have it in me.

Until I grew tired of myself. What did I have to lose? Really? So I asked. Give me a sign of your presence that I cannot ignore. And then I went to bed.

The next morning, I was sitting at my desk by the window when I suddenly heard a loud whooshing sound outside. A huge, white owl flew in, landed on a branch in the pine tree outside my window, not ten feet away. It sat facing me, its round, golden eyes fixed on me. It stared me straight in the eye, the way only an owl can stare. Ignore me if you can.

I was mesmerized. I don't know for how long we sat there, locked into each other's gaze. Tears welled up as I watched this majestic being, knowing in my bones that this was the sign I had asked for. The owl had been my spirit animal since I was very young. I had always felt a profound connection to it, but I had never actually encountered a wild owl. Not once. In fact, white owls weren't supposed to live in these parts. But here it was.

After a while I quietly called for my husband to come see, but that instant the owl took off again. I came for your eyes only, it seemed to say. For a brief moment, the sweeping movement of its enormous wings filled my entire view out the window, then it was gone.

I haven't seen an owl since, but I've kept up the conversation with the divine. I've kept it up and deepened it to a point where I sometimes experience the subtle energy realms of this world as more "real" than the tangible, three-dimensional realm.

I could have chosen to see what happened that day as a coincident; a freak incident involving an abnormally large owl and some wishful thinking on my part. Just like I could choose to see this world as inanimate, soulless, and my own existence as random and meaningless, but I don't.

Because the aliveness of this world is so evident to me. I recognize the rhythm of its beating heart in my own heartbeat, in the dance of my cells, in my every breath, in the vibrations of the atoms. Wherever I look, it's pulsating and radiating. Speaking.

And when life speaks to me, I listen. I don't care anymore whether it speaks to me through the fiery eyes of an owl, through my intuition, through the voice of another human being, an angel, or the creative Muse. We're all pouring from the same source of wisdom anyway. We're life, talking to itself.

Learning to listen deeply is an art to be practiced, no doubt. Many of us have lost that ability completely in this world of information overload. But silence is there. Meditation is available, or prayer, whatever helps you sink below the chatter of the mind.

And once you start to pick up the murmurings of wisdom -- from inside or outside -- you act on it. You take it at face value. That's when it all starts to become magical. That's when the listening grows infinitely deeper, sharper and smoother.

You don't get to wait for absolute clarity before you act. You get inklings, hints, and nudges, and that's what you have to work with in the beginning. So you work it. You live it. You ask for proof when your faith fails you, and you keep responding. And as you do, your courage grows, your discernment sharpens, and your capacity to navigate this language eventually becomes second nature.

Until one day you will have forgotten completely that you ever regarded this world as merely three-dimensional and yourself excluded from divine connection.

That will be a very happy day.

More:
healthy livingintuition WisdomGuidance
Newsletter Sign Up
The essential guide to taking care of your mind and body
Subscribe to HuffPost’s wellness email
Successfully Subscribed!
Wellness delivered to your inbox