There is a gay boycott of the Democratic Party afoot, and it has the potential to turn into something that leads to real change in American politics. I'm not selling hope here, but I can't help but feel it when I see the momentum gathering behind AMERICAblog's "Don't Ask, Don't Give" campaign.

What is most exciting? The places this campaign could go.

It is nothing new to complain about the two-party system in the United States. While many countries give voters four or five or more options at the polls, Americans are forced to decide between a centrist party with conservative social views or a right-wing party with outlandishly offensive social views. Fiscally, there is often more overlap than difference between the two parties (both, for example, act as if lowering or freezing taxes is a productive strategy in the fight against poverty). 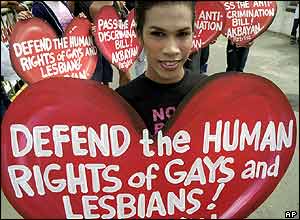 But, for gay voters, the two party system is particularly offensive. Republicans are outwardly horrible on gay issues and the bulk of the gay vote will, automatically, go to Democratic candidates. There are no alternative candidates ready to take a stand for equality and thus, there are no consequences for Democrats when they fail to promote the equal rights agenda.

So, AMERICAblog has decided to use fundraising as a method of coercing the Democratic Party to pay attention to its loyal supporters.

It's a scary thought: taking dollars away from the not-so-bad guys only helps the really bad guys on election day. But the boycott has its timing right and that might make all the difference in this fight: there is still an opportunity for the Democratic Party to take concrete strides towards eliminating the legal discrimination against LGBT Americans before the campaign dollars really matter. If they show progress, the boycott (or the "pause" in fundraising as AMERICAblog calls it) will end.

I think the freeze in fundraising is a great idea. I also think the problem with the gay rights agenda in Congress has more to do with the political system than the particularly spineless nature of most Democratic representatives.

Threatening the fiscal base of the Democratic Party is an important tactic. But threatening their voter base by floating a truly liberal candidate in districts with close races would be an even better strategy. Have someone run on an equal rights, populist platform with support for social services and equality under the law and see how quickly the Democrats start racing around for ways to fold in the left vote they have ignored for so long.

Ralph Nader tried this and managed to strike fear into the heart of major political parties for many years to come. Let's play on this fear. Pause the donations to the Democrats, yes, but perhaps redirect that money to a campaign for plurality, for choice and for political competition. It will, at least, get their attention.