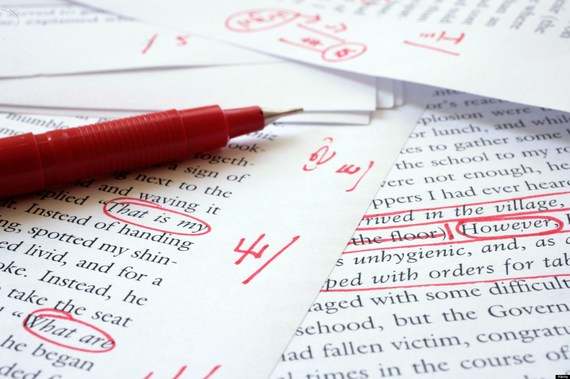 It's a truism for a lot of people that self-published books are filled with typos and errors of all kinds.

But I've been hearing for years from many readers that books published by legacy publishers are filled with typos and errors of all kinds. I've seen it myself. And I wonder what's happened to copy editing as a field. When I started publishing books in the 90s they were gone over rigorously, sometimes so closely that I felt swarmed by mosquitoes. And I often disagreed with suggested changes.

Once I had a copy editor try to standardize the dialogue of characters who were non-native speakers of English. That experience was bizarre and frustrating because these people were supposed to speak as if they were mentally translating what they said from another language.

But I was glad whenever copy editors found something I had missed, like a mistake in a quotation I thought I had memorized correctly years ago, but had somehow gotten wrong, or attributed incorrectly. That's what good copy editing should do: catch basic mistakes of whatever kind and offer the fix -- not rewrite your book in another voice or style.

It doesn't seem to be common enough any more.

Here are just a few random examples of failed copy editing I've come across recently, and they were symptomatic of problems throughout the books.

In several novels I found mistaken references to aspects of Judaism and Jewish life that surprised me because they were pretty obvious. Like "star of David" used more than once when it should have been "Star of David." Or a yarmulke being called a "prayer cap" when it's really a skull cap.

Switching religions, I read a crime novel where one character asked another, "Who do you think I am, the holy ghost?" Anyone familiar with the term would know it should be capitalized.

In a widely acclaimed and beautifully written book of American cultural history, I found missing words and "phenomena" used as the singular, a mistake unworthy of the author and his publishing house.

And then I was reading a World War II thriller where an officer ordered a soldier to shoot someone by using the infinitive in German. He literally said, "To shoot!" A copy editor wouldn't have to be 100% fluent in German to catch that, but would need to care enough to get it right.

In another thriller I just read about terrorism in Europe, the text keeps referring to a Brussels neighborhood, and after many references, suddenly once again we're told that it's a neighborhood in Brussels -- as if it had never come up before.

These aren't gigantic goofs, but they're evidence of systematic carelessness. And though they're minor, they're irritating and can momentarily throw readers out of the book, breaking the narrative's spell. If they're annoying enough, sometimes they make readers throw the book -- across the room or just aside. And that shouldn't ever happen.

Lev Raphael is the author of The Edith Wharton Murders, which got a New York Times Book Review rave, and 24 other books in many genres.