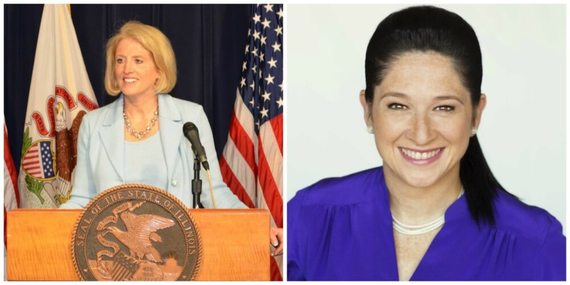 No analysis of the race for Illinois comptroller is complete without the term "proxy war."

It's a term Illinois voters have heard and experienced many times over the decades, as Republican and Democratic party leaders of the Illinois House and Senate pour money into the campaigns of their members to fend off challenges from the other party. Sometimes a candidate's legislative leader funds 90 percent or more of his or her campaign. This is a practice that good-government types, like me, don't like because it creates officeholders who know that their election depends on keeping the boss happy.

But in legislative races, "proxy war" is a bit of an abstract concept. There's no guarantee that a lawmaker will be completely compliant with his or her party leader once elected. And sometimes those party leaders know that forcing candidate A to vote a certain way will doom him/her back home in the next election.

At the moment, there are 110 Democrats and 67 Republicans in the Illinois General Assembly. That's a lot of cats for the four legislative leaders to herd, and the process can be chaotic.

When we use the term "proxy war" in the race for Illinois comptroller between Republican incumbent Leslie Geissler Munger and Democratic challenger Susana Mendoza, however, it's a precise description of what we're getting. Make no mistake: The result of this race will have a direct effect on how effective Bruce Rauner will be as governor for the next two years and how effective House Speaker Michael Madigan will be in blunting Rauner's agenda.

To understand why, you have to look back to the summer of 2015, when Rauner and Madigan were just getting warmed up in what soon would become an intractable standoff over how to address the state's many financial woes. And you have to look to the Illinois State Constitution of 1970, which was written to ensure that a prolonged budget crisis like the one we've had for 16 months now never would happen.

Thus, when Budget Year 2015 ended on July 1, 2015, and there was no state budget in place, we braced for a government "shutdown." That's because the greatest and most immediate effect of having no state budget is the halt of paychecks for most state employees. If government really did shut down, public pressure would be immense on the governor and Legislature to reach agreement on a budget.

Within a week of the end of FY 2015, Attorney General Lisa Madigan successfully sued in Cook County Circuit Court to halt the comptroller's office from issuing paychecks without authorization from a state budget.

"I absolutely want State employees to be paid their full wages. But the Illinois Constitution and case law are clear: The State cannot pay employees without a budget. The judge's order reaffirms this. It remains up to the Governor and the Legislature to enact a state budget to allow for necessary government operations and programs to continue," Madigan said in a statement issued July 7, 2015.

But a day later, a lawsuit in St. Clair County brought by the state's largest union of state employees, AFSCME Council 31, argued that the comptroller's office would violate labor contracts if it did not issue paychecks. Though the comptroller's office was the defendant in this case -- and represented by Attorney General Lisa Madigan's office -- representatives of Comptroller Munger argued on the plaintiffs' side. The governor's office, too, was on the union's side.

Ultimately, the St. Clair County judge ruled in the union's favor. Madigan tried to get an expedited appeal from the Illinois Supreme Court on both cases, but the court refused. Madigan's office opted against what would have been a lengthy appeals process through the lower courts, so state employees have been paid ever since.

So even as higher education funding has crumbled and the sick, elderly and disabled have seen vital services disappear, most of state government functions as normal. In a recent survey by the Paul Simon Public Policy Institute at Southern Illinois University, two-thirds of Illinoisans said they felt no effect of the budget crisis.

(Of course, they're going to feel it eventually, as the state is racking up historically high debt because there is no budget to control spending. All sides concede that taxes eventually will have to go up to pay for it. But that's another chapter.)

This broad appearance of normalcy in state government operation is essential for Rauner. It has allowed him to hold firm on his position that he won't negotiate on the budget -- and the tax increases he says must come with it -- until Democrats pass parts of his reform agenda.

Now, back to the comptroller's race.

If Munger is re-elected, she'll continue the deft job of prioritizing the state's bill-paying that her office has been doing for the last 16 months. Thus, those Illinoisans reflected in the Simon Poll probably will continue to perceive the budget crisis as no crisis at all. And Rauner, without the immense pressure of, for example, drivers enraged because drivers license facilities are closed, can continue to hold fast on his "no reforms, no budget negotiations" stance.

If Mendoza is elected, it'll be another story. She's unlikely to facilitate Rauner's strategy. If you've followed this campaign, you know that Mendoza has criticized Rauner for not doing his job by failing to enact a budget. She's labeled Munger as Rauner's enabler.

Munger has been vocal in publicizing the state's deteriorating fiscal position. But her criticism consistently has been framed to promote Rauner's call for business and political reforms in the process of passing a complete state budget.

And here's another twist: In a decision last March in a union lawsuit over unpaid raises by the state, the Illinois Supreme Court made a statement that affirmed the attorney general's stance from the previous summer that state employees should not be paid without authorization from a state budget.

The court cites "a well-defined and dominant public policy under which multiyear collective bargaining agreements are subject to the appropriation power of the State, a power which may only be exercised by the General Assembly." That means the union's argument in the St. Clair County lawsuit in July 2015 was invalid. The comptroller would not violate union employment contracts because they're governed by the state constitution's appropriations clause (defined in Section 2(b) at this link.)

In April, the office told me the matter was "under review." When I asked again last week, the status remained the same.

When I asked Mendoza's campaign if as comptroller she would use the new case to seek a halt to state paychecks, the campaign sent this statement: "

Bruce Rauner and Michael Madigan probably never will run against each other in any electoral race. But the 2016 comptroller's contest comes awfully close.