It costs politicians more and more every year to get reelected. And that means they become more and more dependent on corporate dollars and wealthy donors to win a seat at the table. So far this year, candidates and outside groups have spent three times more on the 2014 mid-term election than the 2010 election cycle at this point.

Corporations and wealthy donors are willing to fork over big bucks because they view it as an investment. They know if they get the right guy or gal elected it will pay-off big in government contracts, tax-loop holes, deregulation and other perks.

But "We the People" are fighting back. In September, the U.S. Senate debated the Democracy for All Constitutional amendment to get big money out of politics for about a week. While the amendment did not pass, a majority of senators voted in favor of it. 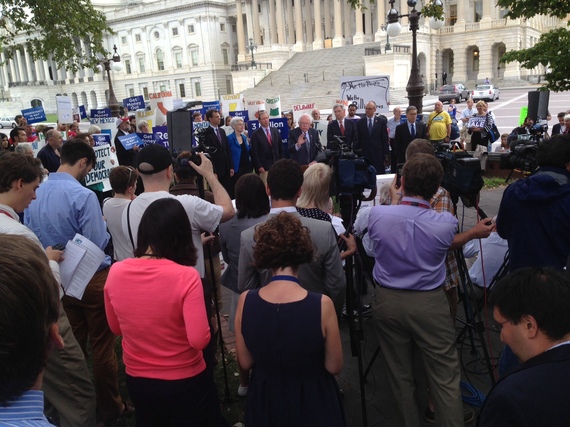 And yet, there was hardly a word about it in the mainstream press.

American voters recognize election spending as one of the most dastardly problems facing this country. A recent survey by Democracy Corps polled voters in states with the most competitive Senate races and 73 percent supported a constitutional amendment to overturn Citizens United. But the New York Times wrote nothing on these debates. Zilch.

It gets worse. According to a report by Media Matters, broadcast stations like CBS and NBC, and ABC devoted less than 1 minute a month of airtime over the last 19 months on viable reforms that would get big money out of politics. That is less than one minute per month talking about a problem that ¾ of the population wants fixed.

U.S. Senator Bernie Sanders, who co-sponsored the amendment to reverse Citizens United, put out a press release stating that the study confirmed the "reason why confidence in the American media is declining."

Sanders added, "We are allowing billionaires to spend hundreds of millions of dollars to elect candidates who will represent the wealthy and powerful rather than the needs of ordinary Americans. This is an issue of enormous consequence." Senator John McCain (R -AZ) simply calls it "legalized bribery."

So why did the media not cover it more? Possibly because the advertising bonanza that Citizens United unleashed is the best thing that has ever happened for mainstream media. The Center for Public Integrity is estimating $196.4 million in television ad spending for this year's senate races alone.

While the media has skirted this pressing matter, organizers everywhere are trying to put a kibosh on obscene sums of money winning elections. That's where StampStampede.org comes in - we're giving every citizen a chance to turn money into media and vocalize their frustration. We are rubber stamping messages such as "Stamp Money Out of Politics" and "Not 2 B Used 4 Buying Elections" onto dollar bills--using the viral circulation of cash as a dynamic, mass visual demonstration of support to get big money out of politics. And no one can black out the millions of miniature billboards that over 25,000 Stampeders are putting out there everyday. This is as grassroots as it gets.

70 percent of voters believe Washington is on the "wrong track." With our elected representatives getting influenced by wealthy donors instead of working on behalf of the common good, this anti-Washington sentiment is unsurprising. But an amendment to overturn Citizens United is not impossible. As Bruce Lee said, "If you think a thing is impossible, you'll only make it impossible."

We cannot afford to be complacent. The recent Senate bill to amend the Constitution was only 12 votes short of passing. Success will be difficult, but it's not impossible. So far 16 states and over 550 municipalities have already passed ballot initiatives endorsing a Constitutional amendment. Momentum for reform is not just building, it's snowballing. But in order to win back our democracy from the grip of plutocrats and fat cats we need to join together - Republicans, Democrats, Independents - and let Washington know: "We're mad as hell and we aren't going to take it."