Ben Zauzmer, an applied math major at Harvard, uses only data -- no personal hunches or opinions -- to predict the Oscars. He has served as a columnist for The Hollywood Reporter, and his work has been featured in The Wall Street Journal, The Economist, and publications across the globe.

We officially have a race! If anyone was upset that Boyhood would run away with Best Picture without any excitement along the way, fear not! The Producers Guild, which threw a wrench into last year's contest by awarding an unprecedented Best Picture tie, did it again this year by catapulting Birdman into first place.

This is no small matter -- the PGAs have correctly picked the last seven Best Picture winners (if we count the tie). Their last miss came back in 2006, when The Departed won the Oscar over PGA champion Little Miss Sunshine.

The correlation is even stronger: For instance, Braveheart (1995) is the only Best Picture winner in the 25-year history of the PGAs to not receive a PGA nomination. The only film hoping to repeat that feat this year is Selma. On the flip side, every single PGA winner has earned an Oscar nomination for Best Picture. Overall, 73 percent of PGA winners end up taking home the big prize a month later.

But if you're hoping for a roadmap to success for Boyhood, that 2006 race provides a good model. Even though Little Miss Sunshine also won the SAG and The Queen won the BAFTA, The Departed earned a DGA win en route to victory at the Academy Awards. Boyhood (or The Grand Budapest Hotel, The Imitation Game, or any of the other contenders) would need a similar split to be the statistical frontrunner heading into the season's final and most important awards show. 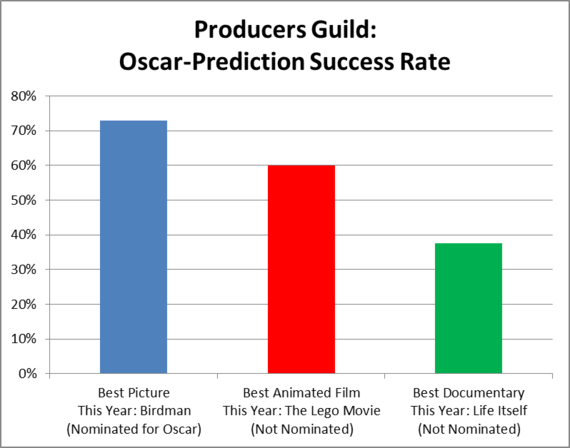 In the other two categories, the Producers Guild effectively made itself irrelevant for Oscar-picking purposes by choosing The Lego Movie for Best Animated Picture and Life Itself for Best Documentary. Both of these movies were widely considered to be Oscar snubs, but regardless of merit, that means that the PGA choices have no bearing on the Oscar races.

This is the second time ever that the PGA pick for Best Animated Picture went un-nominated by the Oscars, with the only other time coming in 2011. That year, PGA winner The Adventures of Tintin was similarly snubbed by the Academy.

So does the fact that the Producers Guild was so off the mark on animated films and documentaries mean they are a worse Oscar predictor for Best Picture this year? Probably not. In the seven years that the PGAs have given awards in all three categories, they have correctly picked the Best Picture winner each time. As a result, they've never gone 0/3.

Could this be the year that the PGA success streak ends? If you're a fan of Boyhood, keep your fingers crossed.