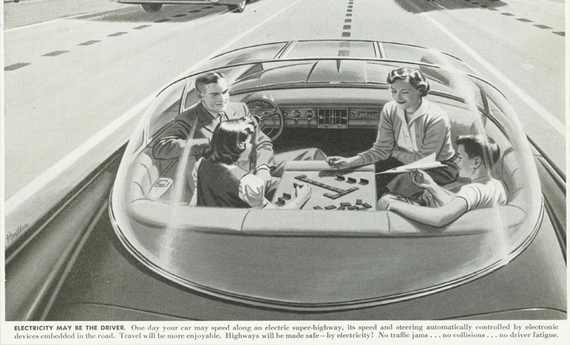 If the above title conjures up post-apocalyptic visions of empty roadways littered with old fast food wrappers, or, if the idea of driverless cars careening all over the road is enough to have you imagine the mayhem of a Road Runner cartoon, take heart. We are not talking about either the end of the human race nor of Wylie Coyote going up in flames. Driverless cars have been around for several years now, and all indications are good.

According to the most recent issue of Newsweek, "driverless cars are already finding their way into the mainstream." In 2012, Google started testing its driverless cars on the roads of Silicon Valley. Luckily, people in that part of the country are so fixated on stuffing more and more money into their wallets, that nobody noticed that empty cars were on the road. Google has "suggested" that its vehicles will become available to the public by 2017. Newsweek doesn't explain the meaning of the word "suggested," but LBL is going to start liberally "suggesting" things to people, instead of promising them anything.

To date, Google's cars have traveled nearly 2 million miles in California and Texas, but have only been involved in 14 minor collisions -- all of which were other drivers' fault. Google has detailed all collisions, revealing the many alarming shared characteristics between human drivers and human voters.

Again, according to Newsweek, the handwriting, (or rather the non-human-assisted writing) is on the wall: "It's only a matter of time before humans let go of the wheel altogether. Within 100 years, young people won't even remember a world in which a human drove."

Life in the Boomer Lane, always looking out for her readers' best interests, firmly believes that older folks will be the beneficiaries of such technology. Millions of drivers over age 75 are on the road in Florida, alone. But there are other old people still driving all over the country. No longer will families have to do interventions on 92-year-old Dad and wrest the driver's license out of his aging paw. People will remain independent until they can transfer lanes to that wide highway in the sky. The worst that will happen will be that Dad will incorrectly key in his destination, and will either spend the rest of his days on earth driving around aimlessly, or will arrive somewhere unfamiliar to him and will end up joining a cult.

Other advantages are the following:

Safety It goes without saying that human drivers often make interesting decisions while on the road. LBL has seen most of them. These included getting to end of an exit ramp, deciding not to exit, and then putting the car in reverse to get back onto the highway. Any artificial intelligence, including invertebrate artificial intelligence, would be an improvement on such drivers.

Traffic flow Because driverless cars are more precise and don't need a wide berth in which to sway back and forth, lanes can be narrower, allowing more lanes per roadway. But, because more people will now have the option of driving, congestion will actually increase. Did you actually think things would get better? LBL is giving you virtual pat on the head and saying "How adorable."

More time for social media People can now video their entire journeys and post on Facebook. If they are especially creative they can hold babies and puppies out the window and film that way, so people can see tots and pets and scenery, all at the same time.

But, alas, like marriage and disposable diapers, anything that seems good can also have its downside. Here, then, is some of that dreaded downside:

Expense You can bet your bippy that these cars will cost the big bucks. Now that other people have won that $1.5 billion lottery, it won't be you who is buying one.

Competition between humans and technology. Unless everyone is going driverless, these cars will have to be on the road with cars piloted by humans. At this moment, LBL cannot fathom how this would be possible, since the current clash on the road between humans and other forms of life who have managed to get drivers' licenses is already quite intense.

Many people question whether a driverless car can anticipate all eventualities, especially those involving deer who are just being deer, children suddenly running out into the street to retrieve a ball, and people who carry under-secured mattresses on the top of cars. At some level, the driverless cars will have to have an override, in which the human can take control. Or there will have to be automatic brake when the car encounters a situation of which it isn't sure. These cars might be braking a lot.

China Since China spends an inordinate amount of time hacking into U.S. companies and U.S. technology, they might be able to override all navigation systems of these cars and force everyone to either drive to farms and create crop circles for their amusement, or head to the nearest Chinese restaurant for dim sum.

Liability If the car crashes, is it the fault of the owner of the car, the car itself, or Google? Google will be the least likely to bear fault, since, next to oxygen and Target, we need Google in order to exist.

What does all this mean for older boomers? It means that you will stay independent longer, your kids will be off your back about continuing to drive, and you may someday experience the joy of creating crop circles.

PHOTO GALLERY
Redditers Share How Tech Has Affected Their Lives
Download
Calling all HuffPost superfans!
Sign up for membership to become a founding member and help shape HuffPost's next chapter
Join HuffPost

1 / 13
Long-Distance Call
"I remember when I was very young, my family calling me to the phone, excited that we were making a 'long distance' call from our home in New Jersey, all the way to Chicago! I listened to the person on the other end, who sounded like they were at the end of a long tunnel. What a miracle!" - <a href="http://www.reddit.com/user/wayndom" target="_hplink">Wayndom</a>, 64 (<a href="http://www.flickr.com/photos/silevitas/3875833956/" target="_hplink">Image via Flickr</a>, Si Levitas)