What happens when you leave your high-paying, high-stress corporate job behind and head to the jungle? That's what couple Glen Tibaldeo and Laura Berger -- authors of "Radical Sabbatical" -- decided to find out in 2006, when they left snowy Chicago to start a life for themselves in Costa Rica.

After taking a trip there a few years earlier, Tibaldeo and Berger fell in love with the country. They had a great life back home, but they were craving a challenge and a little adventure. So the couple put away a chunk of money, rented out their condo in Chicago, quit their high-stress jobs as corporate strategists and headed to the jungle.

The warm weather, beautiful scenery and lack of work stress seemed like it was exactly what the doctor ordered, and the couple quickly found that it was ... but they learned a few other things along the way.

Here's what Tibaldeo and Berger discovered when they moved to paradise:

Taking the road less traveled can be pretty terrifying.

Right before their move, when Tibaldeo was feeling particularly overwhelmed about the huge leap he was about to make, he came to the realization that life would be a whole lot simpler if he were one of those guys who was content with the white picket fence.

"Life would be so much easier if I could just have the kids, the yard, and the house like you," he wrote in an email to a friend. "No movers, no jungles, no saying goodbye to family, no third world countries. But something inside me knows I'd be miserable. I guess I just need to accept that I am different."

Being busy is a lot more comfortable than it sounds.

It seems all we do is complain about how busy we are. But Tibaldeo and Berger quickly found that it wasn't easy to just be still with their thoughts, even in such a beautiful place.

Shortly after their arrival, Tibaldeo noticed that he was obsessing over little things, like getting his hands on the perfect rental car. "Am I already creating stuff to keep me busy in a tranquil setting?" he asked himself. The answer, it seemed, was yes. 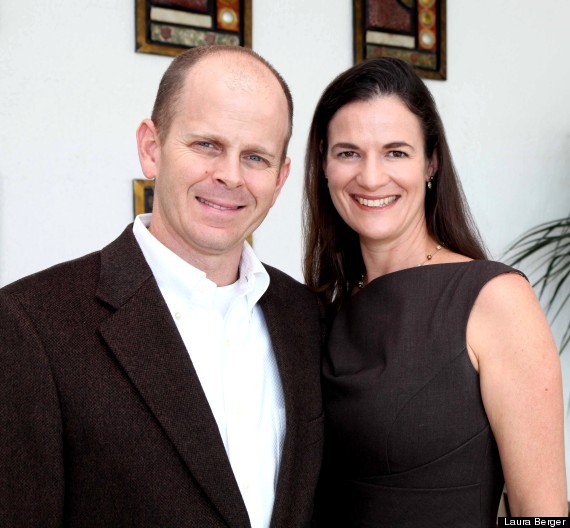 Being in a new place helped them see the beauty in ordinary things.

After finding themselves stuck in the mud in a new set of wheels for a good ninety minutes and managing to dig themselves out on their own, Tibaldeo and Berger weren't frustrated. In fact, they realized they'd had a great time.

"Think of everything we just explored and learned in just ninety minutes," Tibaldeo said to his wife. "Back home, I'd sit in traffic for ninety minutes and not remember any of it."

In the United States, everything was at Tibaldeo and Berger's fingertips. But in Costa Rica, they were forced to be a little more creative. Instead of heading straight to Google, the couple found they had to actually talk to people. And that they liked it.

"I like how the problems make us go out and socialize with people," Berger said to her husband.

It helped them overcome some of their biggest fears.

After coming face-to-face with a snake, Berger -- who hadn't exactly been a fan of the reptiles -- found she wasn't as bothered by them as she expected.

"What did we expect coming here?" Berger asked Tibaldeo. "I was on top of the world at breakfast -- I even felt comfort, like we found the reason we came here ... to be one with nature."

Being away from friends and family was more painful than they had anticipated.
Although Tibaldeo and Berger spent Christmas with friends who had grown very dear to them in Costa Rica, being away from their family members and lifelong friends was tough.

"All in all, the holidays had been negative to our life leap, revealing front-and-center how removed we were from family and a life we had worked so hard to build," Tibaldeo wrote.

It gave them a huge amount of perspective.
Being away from family, friends and the comforts of Chicago was difficult for Tibaldeo and Berger -- but it helped them see things in a different light.

"Think about the perspective we will always have on life," Berger said to Tibaldeo on a particularly difficult day. "No matter what life throws at us, we'll look back on our courage. We'll be able to do anything."

Not having a choice can be a good thing.
Unlike many of the locals around them, Tibaldeo and Berger knew that it was ultimately their choice to leave or stay in Costa Rica. But somehow, knowing they could always leave made their challenges even more difficult.

"In an odd way, we could see a blessing in lack of choice to stay or go," Tibaldeo wrote. "There was something about facing a challenge and saying, 'I have to make this work,' instead of 'What does this mean?'"

Paradise was tough on their relationship.

Although it seems counterintuitive, Tibaldeo and Berger quickly found that being surrounded by beauty without much to do wasn't easy on their marriage. It didn't help that Berger got sick pretty early on.

After a huge fight, Tibaldeo wrote that he felt like "in five short months, we had become permanently incompatible." But by making an effort to constantly communicate with each other, they were able to move past these hurdles. And their marriage was stronger for it.

They learned to expect the unexpected.
By the time Tibaldeo and Berger returned to Chicago at the end of May, the couple realized they'd learned quite a bit from their six months in the jungle. Perhaps one of their biggest takeaways was that plans are just plans, and there's only so much you can control in life.

"The only thing expected is the unexpected," Tibaldeo wrote. "Especially in Costa Rica."