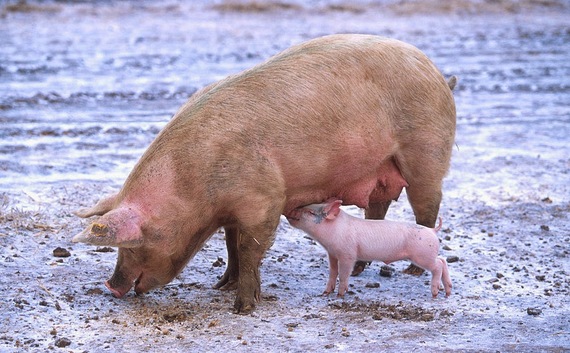 Do you ever find it impossible to get a thought out of your head? Do silly ideas insinuate themselves into your consciousness like ticks until they have become full blown cases of Lyme disease which require the kind of brain washing that's the equivalent of a potent antibiotic? For instance have you ever been eating with someone and begun to think of them like a farmyard animal? At first it's funny. You peer at your boy or girlfriend, husband or wife and they look just like pigs eating out of a trough. You might even laugh aloud and if you have that kind of relationship, share your feelings with them. After all, as we all know, feelings aren't facts. Everyone thinks or feels this or that. It's only human to have random sometimes naughty thoughts. The true problem begins when you can't get rid of them though. Every time you sit down to eat with your beloved, even say when you fork out for the fancy French place, their nose looks like a snout and their munching has that frantic animal feel that leaves no doubt they're going to eat everything on their plate. The disease begins to metastasize and as they sleep next to you snoring and grinding their incisors. You worry that during the night they're going to turn over and even bite. A little pain during sex can be fun--a hickey, a few nails in the back, some hair pulling--but full blown cannibalism? What do you do when these thoughts are now getting in the way of the normally loving and trusting relationship it's taken years to build? Get into treatment.