Should the Salahis be boiled in oil, mercilessly flogged or has the media made it much more than it really was?

After hearing about Tareq and Michaele Salahi, the brazen pair who crashed the White House State Dinner, I was alternately intrigued and worried, especially the way the media reported it.

In particular CNN, where Tom Foreman and Erica Hill, subbing for Anderson Cooper, kept harping at how horrible it was and that national security was clearly at stake.

Please, this is much ado about -- not exactly nothing, but not nearly as much as they were screaming about. And I say this as one who adores Erica Hill, in particular her eyebrow raised banter with Anderson Cooper. But I guess when she's actually hosting the show, she's determined at all costs to prove she's a serious journalist. 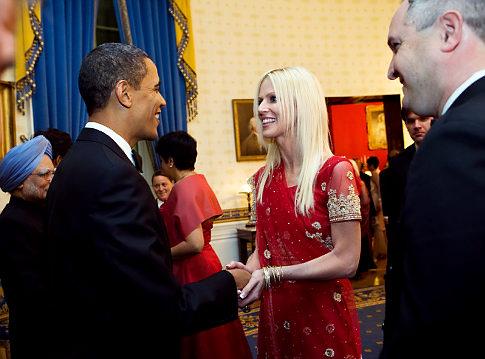 Okay, but when she ominously suggests what these folks did might get them into prison, fueled by Bush Homeland Security Advisor Frances Fragos Townsend, who said it was a federal offense to lie to a federal officer, I have to say, enough! Let's put it all into perspective, not to mention why Ms. Townsend wasn't outraged about the lies told to federal officials in the Bush administration concerning the so-called weapons of mass destruction that got us into a seemingly endless and deadly war in Iraq.

So, what did these masqueraders do that was so different from the Streaker who got into the Academy Awards or any other famed gate crasher of recent memory? Yes, it was the White House, but it's not as if they were found in the residential quarters hiding under the president's bed. Indeed, some of you may remember the unwelcome guest Queen Elizabeth woke up to in her Buckingham Palace bedroom in 1982. That was a national security breach. What happened at the State Dinner pales in comparison.

Did the Secret Service err? Absolutely. Was the president in apparent danger, absolutely not. No more than when he steps out of the White House and attends a county fair or similar dinners held in grand hotels.

The Salahis somehow talked their way through the initial entrance point, then went through metal detectors, as did all the guests. Some have said, "But they could have picked up a knife from a table." So could any of the other guests, and just because the others were "cleared" through social security cards and the like, were they all so well-known that they couldn't have been part of some sleeper cells living in America for years?

But someone might say, "When Michaela Salahi shook hands with the president, she could have kissed him with her poison lipstick," as if straight out of a James Bond thriller. And so could anyone on a receiving line at any of the hundreds of events the president attends during the year, where people are not screened in advance. He always has secret service bodyguard protection around him and certainly did at this reception. But it's impossible to totally protect the president from all situations, so it's silly to get hysterical about this happenstance, except to wonder how the uninvited got to mingle with the elites, who'd gotten official nods.

Are there background checks for the kids and parents who come onto the White House lawn for the Easter Egg Roll each year? The president and his family mingle with them as well. Not to mention the many, many tourists who visit the White House daily, whether the president is there or not. While there, they are watched. They do not have free rein of the mansion. Just as the Salahis and the other State Dinner guests (including the Indian Prime Minister and his wife) could not have walked anywhere they wanted and taken the elevator to the family residence.

I think there's amazement at what the Salahis did, and the Secret Service should take note, but what the Salahis accomplished didn't make Obama particularly unsafe if the basic protections surrounding the immediate area of the president are in place.

Crashing a party, even at The White House, does not rise to the level of a federal crime, so much as indicate dismay that the officials in charge were not able to keep the riff raff out. I'm not pooh-poohing the necessity to keep all of our First Families and thus the well being of our nation secure. However, I'm saying what the Salahis did was a rather remarkable achievement, but no more a cause for alarm than if they had achieved the same result at a dinner attended by President Obama at the Waldorf-Astoria.

I also find it intriguing that there were many who were willing to give the Balloon Family a pass, in particular the often smug Jeffrey Toobin, also of CNN, who essentially said that, while it was wrong, nothing horrible had been done.

No? In that instance, not only were millions of Americans gripped in terror worrying about a little boy's safety, but more significantly the Heenes had launched an aeronautical object that could have wreaked havoc on an airplane or caused severe damage to electrical or telephone wires. And don't forget thousands who combed the areas searching for the balloon and the supposedly lost boy, including professional safety people who might have been used elsewhere for a true emergency, which fortunately never occurred.

The Media, be they Brian Williams on NBC, Katie Couric on CBS, Diane Sawyer on ABC, or the cable outlets Fox News, MSNBC and the The New York Times and The Washington Post in their bid for competitive ad dollars, seem content to make news out of news that is only partially so. Or blow things out of proportion such as in the Michael Jackson non-stop coverage or Octomom. To suggest that the Salahis go to federal prison is nonsense. They should be thanked for exposing some flaws in the Secret Service System, though the flaws themselves led to no real danger to the president, and isn't that the real story?