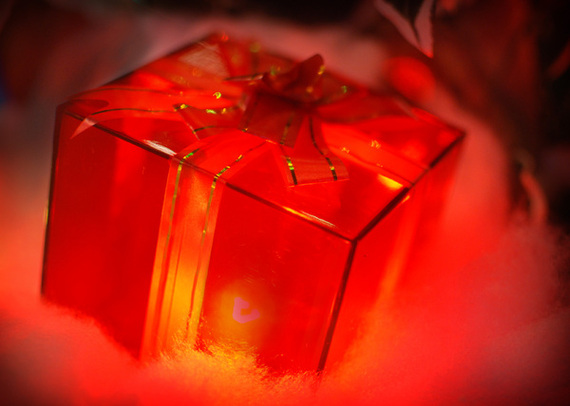 It's the thought that counts when it comes to Christmas gifts, but what happens when someone's thought has led to one of the worst things you've ever opened? In my new book, Finding Mr. Brightside, Juliette encourages Abram to forgo getting her anything for Christmas, at least until after she's (jokingly) killed herself, for this very reason -- not because she wouldn't appreciate the attempt, because she's a bad actress who doesn't trust her own facial expressions. But maybe the below tips would've changed her fa-la-la-la-la...

How to fake-like a terrible Christmas gift:

1. Admire the wrapping. Just in case there's a disappointment bomb lurking underneath the curly streamers and shiny paper. Whatever you do, don't keep the bow -- this will make it seem like you value the bow more than the disappointment bomb, which is true but hurtful to people who think of themselves as thoughtful gift bombers.

2. Hide your face with whatever you've just unwrapped like you're admiring it. This taking-it-all-in technique is particularly useful when given fug clothing items and uninspiring artwork that's more to the giver's Pier-1-of-a-kind tastes than your own. Gulp a deep breath, smile fakely, and hope the smile turns genuine before lowering your item again.

3. Don't give up your turn too soon (in group settings). Encouraging the next person in the group to open their gift RIGHT NOW is like saying, Move the spotlight anywhere else, it's not fair for me to pretend this gift is as good as my others anymore! You have to be stronger than this, just a few more seconds of disingenuous appreciation and it'll be over until you unwrap that other similarly wrapped package the gift-giver placed in your pile. One thing at a time.

4. Put the hallowed gift receipt in the box and act like you don't care if it gets thrown away. Especially useful if the gift-giver says something self-protective beforehand, like, "I took a bit of a risk with this one." Grimace, yes, they certainly did, which is why you can't risk losing track of that receipt box!

5. Be prepared to answer the question: Do you really like it? They're onto you. Whatever you do, don't pretend you don't understand the question. Throw it back in their uncertain face maybe, like, Why wouldn't I like it? I don't have one of these yet. (There's a reason for that, of course, but hopefully they'll chalk it up to their uncanny ability to provide what's intentionally been missing in your life.)

6. Try it on and/or start using it. This is obviously a LAST RESORT, but nothing proves your fake point faster than a demonstration of how much enjoyment you'll be netting from your gift long after the party's over (and you lose the gift receipt, and you gratefully accept the store's offer to give you five beautiful dollars of store credit).

Click over to my website for a chance to win a free copy of finding Mr. Brightside.

Jay Clark
Author of The Edumacation of Jay Baker and Finding Mr. Brightside.