What to do with Lolong, the crocodile estimated to be 20-21 feet long that was recently captured in the Philippines? The question is weighing on the mind of local officials and environmentalists alike.

The Associated Press reports that People for the Ethical Treatment of Animals (PETA) suggests the croc should be set free. They claim that "if it remains in captivity it is likely to develop abnormal behavior and endanger its caretakers and visitors to a proposed park."

But others are saying not so fast. Local officials in the Philippines warn that the crocodile could pose a threat to the 1,300 residents of the fishing village near where Lolong was caught. The crocodile, which weights 2,370 pounds (1,075 kilograms), is suspected of killing a local fisherman and a water buffalo in the past two months, and a child two years ago. But officials believe an even larger crocodile, which may be responsible for the deaths, is still on the loose.

With Lolong in captivity, locals plan on making the crocodile the star of a new ecotourism destination. Until a permanent enclosure is built, the Associated Press reports that Lolong is living "in a 8,610-square foot (800-square meter) pen with 4-foot (1.2-meter) -high concrete walls topped by welded wire." 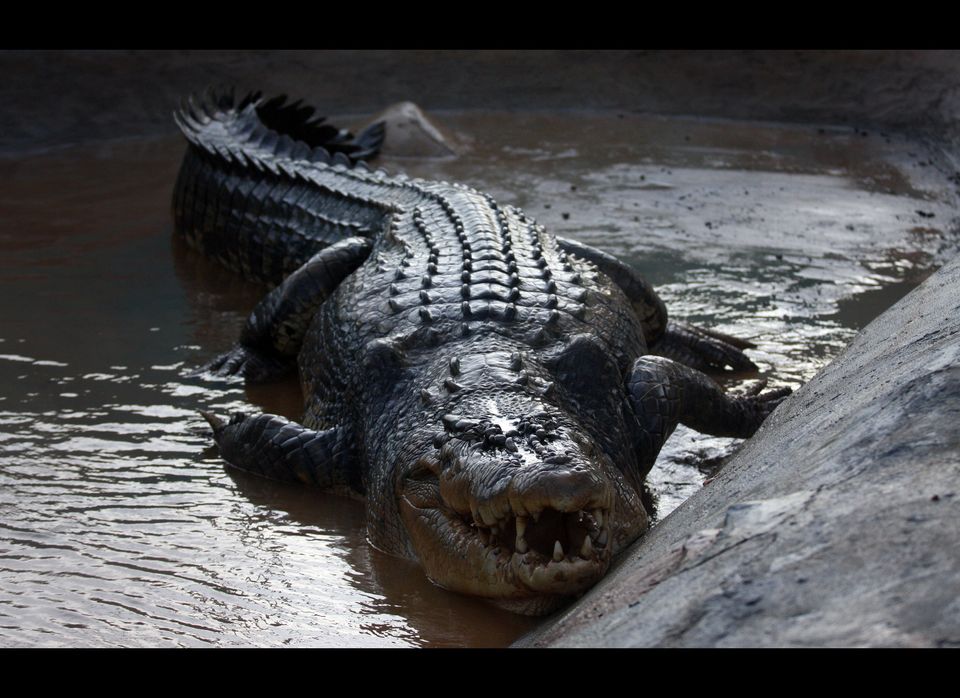 1 / 4
World's Largest Crocodile
A 50-year-old 1,075-kilogramme (2,370-pound) saltwater crocodile is seen inside a penned pond on September 13, 2011 in the southern township of Bunawan, Philippines. The 21-foot (6.4-metre) monster, suspected of eating a local man who went missing in July in the southern town of Bunawan, and of killing a 12-year-old girl whose head was bitten off in 2009, was caught in a remote southern creek on September 3, with officials planning to use it as a tourist attraction once it adapts to its cage. The Philippine specimen is bigger than the previous largest captive saltwater crocodile, which the Guinness World Records website lists as a 5.48-metre (18-foot) male that lives at an Australian nature park. Animal rights group People for the Ethical Treatment of Animals urged the Central Government to free the creature but officials they won't free the beast saying the safety of locals their top priority.
Jeoffrey Maitem, Getty Images