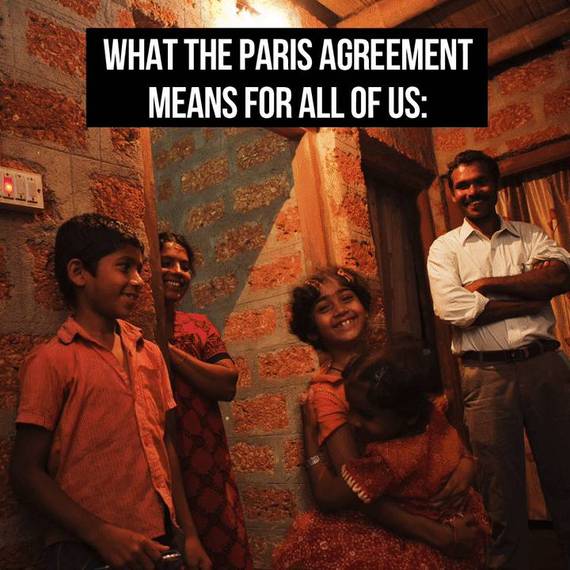 With the Paris Agreement coming into force the week before this big UN climate meeting, the timing couldn't be better for swiftly moving forward.

Paris accelerates the transition to the zero carbon economy that is already underway. People around the world are taking action to install solar and wind solutions, block coal and oil infrastructure and protect forests.

Just take a look at the Solar Power for Women and the recent tour of the Rainbow Warrior's Sun Unites Us, that started in Beirut and made its way to Morocco. People want a different future and are creating it. This determination has grown stronger and louder since Paris.

While governments' climate negotiators meet every year, not every meeting is like Paris where the crisis facing us, and the urgency of reaching an agreement, brought heads of government from around the world to the negotiations. Marrakech is a different kind of meeting, but that does not make it less important. Quite the opposite.

If Paris was about creating the framework for addressing climate change, Marrakech is about deciding on the rules so that the goals of Paris are not only achieved but overachieved.

Those goals are to limit global temperature rise to well below 2°C and aim to keep it to 1.5°C driving to a zero carbon economy by 2050, with all the policies and financing in place to ensure that action occurs and no country is left behind.

We all know that working out a set of rules can be taxing, but getting it right is essential if Paris is to have the effect that is needed and not be full of loopholes. Delegates in Marrakech have to stay true to the spirit and words of Paris and ensure the rules reflect that spirit as well.

In other words, they've ratified it, now they have to act on it.

These are the issues which should be at the top of the agenda in Marrakech.

1. Action to increase both immediate and future emission cuts. It is already clear that countries' existing climate plans (or nationally determined contributions) are not strong enough to keep the global average temperature rise to 1.5°C. In the Paris Agreement, countries agreed to review those targets in 2018. Marrakech must ensure that this re-visiting of climate plans not only happens, but results in plans that match the global goals. Also, we need additional action right now, as the 1.5°C goal means we can't wait even until 2018.

2. A decision that a strong set of rules to implement the Paris Agreement will be finalized by 2018. These 'rules' include:
a. clarifying how countries can commonly account for emission reductions so everyone can effectively track what is going on; b. agreeing how countries are going to assess the adequacy of their targets in 2018 and in later review rounds and c. deciding how countries will 'count' their finance moving forward.

3. A set of decisions and commitments, which are followed through, that ensure poor and vulnerable countries are supported, both to implement their own climate plans and to deal with the impacts of climate change that are already having a devastating impact on their countries. From delivering on finance and capacity building to keeping adaptation front and center, these are critical components of the Paris Agreement and they are fundamental if we are to make progress.

4. A way forward on getting long-term 2050 transformational plans in place on reducing emissions, building resilience and shifting finance. These long-term plans in the Paris Agreement were critical to send the signals to the corporate and financial communities as well as to the public, that the phase out of fossil fuels will occur, and the billions invested in coal, oil and gas will shift to renewables, to achieve a zero-carbon energy system.

5. A clear and credible way forward on Loss & Damage. The current agreement, made in Warsaw three years ago, must be reviewed, and a work-plan for the next five years take shape. This needs to provide practical solutions for those already suffering losses and damage due to the impacts of climate change.

To reach agreement on all these issues will require continued international cooperation, in the spirit of Paris. Those countries in the frontline of climate change must continue to have a powerful voice in the outcomes.

They played a leading role in Paris, putting together a High Ambition Coalition which united North, South, East, West, rich and poor. Their collective voice gave momentum to the Paris talks and helped deliver the ambitious Agreement.

This group now needs to work to ensure that the rules of Paris close any loopholes and promote ambition - and that the inconvenient truth of dangerously weak national targets is addressed head on. It is often at this moment in negotiations, when the spotlight has turned away, that special interests creep in and craft rules that weaken the clear intentions of the Agreement. This must not happen, and the High Ambition Coalition is the right group to prevent it.

The Paris Agreement has to continue to push ahead and increase the pace and scale of change in the real world developments, such as in the continued growth of renewable energy and sustainable solutions in land-use and transport.

Marrakech is the moment to clearly demonstrate that countries are not only staying the course, they are running faster.