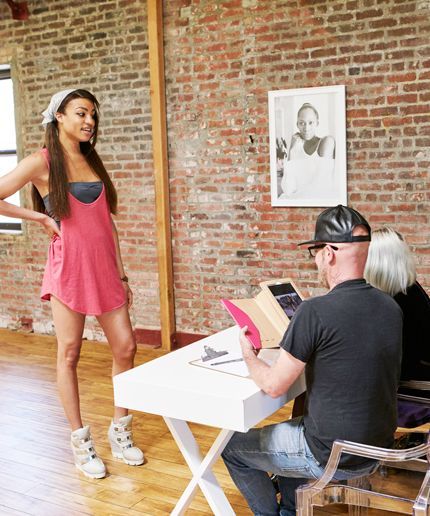 If you've experienced model-competition show fatigue at any point in America's Next Top Model's 12-year, 22 season run (and counting), Whoopi Goldberg has your fix. Strut, a new show about Slay Model Management -- the world's first transgender modeling agency -- premieres on Tuesday, September 20, on Oxygen, and Goldberg is the project's executive producer. The show chronicles the burgeoning careers of six transgender models repped by Slay. Think: ANTM, but much more poignant (and minus the campy contest factor).

The show aims to add traction and visibility to today's transgender community, and connect them to viewers based on a set of common, core struggles and values. "Our models come from all walks of life; all different backgrounds and ethnicities. They are struggling with things we can all relate to -- trying to make ends meet, fighting to make a name for themselves and navigating the minefields of personal relationships," Goldberg said in a release. "All of these struggles are amplified by the fact that they are also fighting to break down barriers and taking on the responsibility of representing the transgender community in today's society. It's time to separate caricature from real people, and that's what we are doing with Strut."

The cast includes ANTM alum Isis King, Instagram star Laith De La Cruz, Dominique Jackson, Arisce Wanzer, and Ren Spriggs. The show's trailer features one-liners like, "They want a girl that's 6'2", 35-25-25 -- they didn't ask if you have a penis or not." There are also thoughts on shifting industry perceptions of trans models: "A decade ago, we were hiding on the runways. But now, it's a new age." These are tangible signs of progress, but they also underscore the amount of work that still needs to be done.

When the show airs next month, we're expecting your typical reality TV show sizzle, of course (the micro-spats, the egos, some drink-throwing drama), but underneath all of that, the subject matter is sure to encompass some sensitive plot points that need to be on television. Here's hoping Strut walks the walk. Check out the trailer, below.