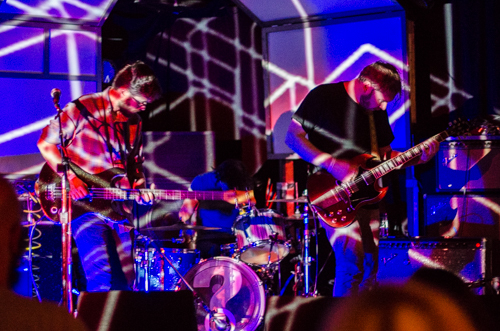 Wray performing at The Empty Bottle (Photo by Johnny Nevin)

If you'd like to hear some good new music, here's some news. There was a really good album made this year that you might not have heard, by a talented band that you may not know, that was released by an imaginative label you're probably not familiar with, from a vibrant music scene you're almost certainly unaware of.

If any of that sounds unusual, here's another surprise. The music scene where the label is that signed the band that made the album is Birmingham, Alabama, but (just one more surprise) that tells you absolutely nothing about what the record is like.

Wray is a three-piece band out of Birmingham whose album is a driving but dreamlike adventure through the collective musical imagination of David Brown, David Swatzell, and Blake Wimberly. Their music is sometimes referred to as 'power gaze', because it shares a mesmerizing and atmospheric richness with much of the music that is called 'shoegaze', but they drive it hard and never let it lose its power. In reality, what they're doing is much more complex than anything you can describe with a name, partly because of where their music comes from, and partly because of where they can take it.

Their music comes from a lot of places and a lot of possibilities, but in a couple of ways, it actually comes from Birmingham, Alabama. It's not just that they all live there, in fact it may be more because the Birmingham scene, and their label Communicating Vessels, are so supportive of music, and especially of music that has more than one dimension. "Southern cities can easily be kind of cornered into having that Southern rock sound, or whatever you want to call it," bass player and singer David Brown explains, "but that's definitely not what Birmingham is. There's a big mix of all different types of music here." Because of that openness, you can see hip hop, shoe gaze and punk at the same venue on the same night. "Hip hop bands, punk rock bands or whatever, everybody hangs out together," Brown continues, "they all play shows together, which is very cool. It's a very unified scene."

What that means for a band like Wray is that they can find their own sound in whatever way they feel will make for the best music. Their self-titled album Wray includes seven tracks, and although there's a convincing consistency in its sound from start to finish, as you ride through it the band's exceptional musicality makes for a continuously expanding feeling of depth. They're vividly conscious of the balance between repetition and exploration, and each of them makes a continuous series of choices in their playing of when to stay with what they're doing and when to expand it. It's a really effective way to blend relentless momentum with a panorama of textures and ideas, and it means that you can listen to these tracks again and again and always find something more to listen for.

"We all love shoegaze music," guitarist David Swatzell says, "but we're all into a ton of different music too, a lot of art rock, avant-garde and psychedelic." The band writes the tracks, and more importantly, keeps building them, together. "We just start kind of messing with an idea together and kind of flesh it out as we go, usually recorded with one of our phones," drummer Blake Wimberly explains, "and then we play it back so we can see where it's going." By the time a track makes it to the record, it's a seamless integration of ideas and influences and inspirations, all put together into a constantly compelling demonstration of how to make and play music.

One thing is sure, if you're hearing it, you know they thought about it, and probably a lot. For example, Wimberly talks about the end of the fourth track on the album, "May 15", where the band rides the same instrumental groove relentlessly, but with each of them changing what they play just enough to keep adding depth to it. "You play it a number of times, and you kind of want it to change, but then you just keep driving it and driving it until it either explodes or something happens," he says, and it gives you a good idea of how carefully they craft these songs. The fact that they can do it as a group is even more remarkable, and the effect more powerful. You can see the same carefully intense dynamic in their live show, where they drench themselves in a continuous light show of rapidly moving shades and colors, with Brown's vocals mixed so deep they feel like a fourth instrument.

"You don't really know what to expect until you come and experience it," Bekah Fox of Birmingham's Communicating Vessels (Wray's label) says of the band. "My favorite thing, like with every other band we have on the label, is that they're always compared to someplace else. We always hear things like 'this sounds like Birmingham England' or 'this sounds like California garage rock' or just 'this doesn't sound like southern rock'." 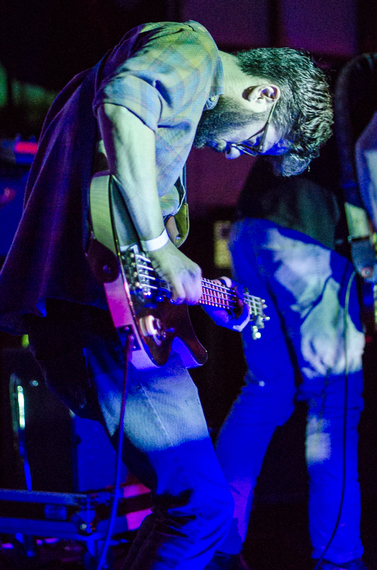 Wray performing at The Empty Bottle (Photo by Johnny Nevin)

As far as Communicating Vessels is concerned, that's a good thing, and Fox believes it has everything to do with the openness and mutual support of the artists who make up the Birmingham scene. "There's a lot of collaboration, but also just a lot of cheering each other on, supporting each other, playing shows together," Fox explains. "It's like where the name Communicating Vessels comes from, from the idea that we all influence each other, that we have impacts on each other, and that's kind of like what our goal is as musicians, to influence each other, whether it be in our own city or outside of the city."

It surprises a lot of people who don't know about the Birmingham scene, but Fox likes it like that; "I like the idea that people aren't expecting it," she says. When it comes to Wray, though, maybe nobody should be all that surprised after all. Any time that music is such a careful and creative collaboration, yet still a such a rich reflection of individuality, it's just bound to defy some expectations.