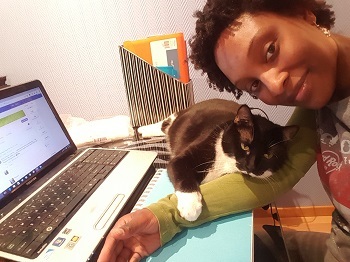 Brie working at the computer with her cat, Zoe
At times it seems like my 10 year old cat, Zoe, is an extension of my arm. Whenever I am sitting at the desk and working on the computer, she comes over to me, nudges my chin with her head, and plops down somewhat beside and somewhat on top of the keyboard, and rests her head on my arm. And any time that I even think about changing positions, or move my wrists just the slightest bit, she opens one eye, glares at me, and shuts it again as if to say "Don't even think about it". The funny thing is that I actually try to oblige her and feel guilty if I move too much while typing and forget to use my left hand to activate the mouse instead of my right. I mean, after all, I am right handed, but even that is no excuse.

Another example of how well she has me trained is that whenever she grants my husband and me the pleasure of her company, and chooses to sleep in our bed, she picks out her spot and is not to be disturbed for the profound impact that it could have on her sleep. 99.9% of the time she chooses to sleep right next to me curled up in my arms, and I am very careful to give her enough space so that she doesn't fall off the edge of the bed. On these occasions it is my husband who has to adjust and sleep close to the edge on his side, simply because he chooses to come to bed later than Zoe and me. The simple rule is "first come first served". But in all fairness, if I manage to wake up when he enters the room, I am sure to remind him that Zoe's sleeping so he doesn't make too much noise or ruffle the covers too much when he's trying to get situated and comfortable.

I could continue on with more examples of how I habitually put our cat's comfort above that of my own and often times even that of my husband, but I think the first two should give you a pretty good idea of how much she means to me. That being said, when she got sick last month and I wasn't sure if she was going to make it, you can imagine the pain and agony I felt with the prospect that she might die and that all the discomforts that we regularly endure would become our fondest memories. 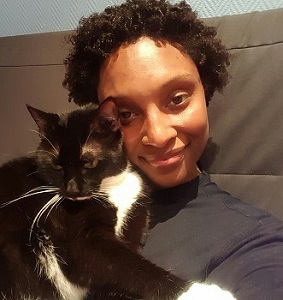 Zoe weights 6.9 kg (approx. 15 lbs) and is no stranger to eating. In fact, it is her favorite past time, next to sleeping. We've tried everything to increase her activity level including toys, walks, yard time, and laser lights, but nothing has worked. She is committed to eating and there are no exceptions. So one night, about a few hours after dinner, when she regurgitated her food, we thought it odd but not too serious. It was only the next morning when she started repeatedly vomiting up bile that we knew something had to be seriously wrong.

It was 6 am Wednesday: our only option was to take her to the emergency hospital. The vet's initial steps were to perform a physical examination, take an x-ray to see if anything was lodged in the stomach, take the temperature, administer a Cerenia injection to stop the vomiting, and start re-hydrating her with IV fluids. She remained in the hospital all day and was released that evening as the vomiting had ceased and she had started to regain her appetite. The hospital gave me some medication to assist with digestion, but after she got home it seemed as if things were getting back to normal.

The next day her appetite level went back down. She was no longer my hungry kitty, and instead wasn't interested in eating at all. This time we headed to a second veterinary hospital in order to have an ultrasound of her abdomen and additional blood work done to try and determine the extent of the problem.

During the ultrasound the doctors noticed that her pancreas seemed inflamed, so the initial thought was that she could have pancreatitis. To be sure of the diagnosis, the vets took additional blood work to review her enzyme levels, but as it turned out her levels were considered normal. They then administered additional IV fluids to increase her hydration, and waited overnight to watch and see if her appetite returned before releasing her to come home. When I picked her up from the vet hospital the next day they explained that Zoe had an inflammation of the stomach lining otherwise known as gastritis and sent me home with pain and an anti-acid medication to give her for the next 2 weeks.

Zoe's apatite steadily increased, however, the following Thursday, just 6 days after leaving the second veterinary hospital, the refusal to eat returned. I immediately took her back to the first veterinary hospital that performed the initial examination, and they repeated the ultrasound and another full blood work analysis to see if the previous diagnosis had worsened. The good news was that the pancreas and stomach lining were back to normal, but the stomach motility had seemingly decreased. That same night I was able to take her back home, even though her apatite hadn't returned during her stay at the hospital. They gave me medicine to increase the motility and special veterinary a/d food to hopefully stimulate her appetite. The blood work took 24 hours for the results so we had to wait until the next day to see if the condition was more serious than anticipated. At home that evening Zoe ate a little, but nothing impressive, and the next day was worse than the previous one. She wasn't eating at all and was lethargically staying in one place. I frantically called our family vet who dropped off an appetite stimulus medication. By late afternoon the blood work had returned indicating that everything was in order, and there was clinically nothing more to be done to explain the lack of appetite and lethargy.
Continue reading on Zoe's Couch

More:
healthy livingPetsultrasoundpancreasCats
Newsletter Sign Up
The Morning Email
Wake up to the day's most important news.
Successfully Subscribed!
Realness delivered to your inbox