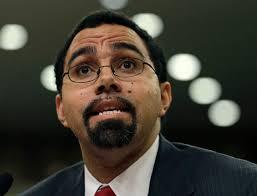 On March 14, 2016, the US Senate confirmed John King as the next US Secretary of Education. In December 2015, Senator Lamar Alexander told President Obama to nominate someone and that he (Alexander) would "make sure he was confirmed."

Sure enough, that is what happened.

According to Alexander, his push for a Senate-confirmed US ed secretary is to have that person officially accountable to the Senate as Alexander's Every Student Succeeds Act (ESSA) is implemented in schools beginning with the 2016-17 school year.

With his No Child Left Behind (NCLB) waivers, former US Secretary of Education Arne Duncan (with the blessing of Obama) effectively dominated and bullied state education systems. Alexander's ESSA includes language that is supposed to rein in any future would-be Duncans who might try do the same.

Still, it is possible for a US ed secretary to ignore ESSA language and try to do as he pleases. Such is the set up for John King, who, like Duncan, has Obama's blessing, and who has the reputation for doing as he pleases and tuning out any who oppose him.

And even though Alexander now has his wish for a US ed secretary who will officially answer to the Senate, my belief is that the Senate had better anticipate that King will try to run the show as states submit their plans under ESSA Title I- especially as concerns state standards, assessments, and accountability.

Prior to the Senate's voting to confirm King on March 14, 2016, two senators spoke regarding their concerns about having King as US secretary of education. I have transcribed the text of their speeches below (all of which can be seen on this CSPAN video beginning around minute 54).

I believe their concerns provide insight into what America might expect with King in charge as ESSA moves forward.

The first speech is from Sen. Tom Rankin (R-OH), who speaks about the "Dear Colleague" letters issued under the auspices of the US Department of Education (USDOE). I wrote about the "Dear Colleague" letters in this January 07, 2016, post. In short, these letters illegally add to given law by purporting to interpret it. Rankin addresses the issue on March 14, 2016, prior to the vote for King's confirmation:

I have had an opportunity to meet with [King] and discuss his leadership and his view of the law. I share with you, Dr. King, in the view of many legal experts and school officials across the country, the Department of Education has been bullying schools to comply with policies that simply do not have the force of law. This coercive use of power, however well-intentioned, is wrong, and it's unlawful. ...

Regrettably, Dr. King has refused to commit to stopping these regulatory abuses if he were confirmed. ...

... I appreciate that these guidance documents predate Dr. King's service with the Department, and that he had no role in their development or issuance. But when I asked him to reexamine them and the process by which they were created, he protected them instead of the acknowledging the problem with the process. That tells me there are more "Dear Colleague" letters coming to our schools, and this agency will continue to make up the rules in a vacuum and threaten federal funding for those who dare not comply.

So, there you have Concern Number One: King defends the "dear Colleague" letters, and as Rankin points out, King's defense could well mean that King himself plans to use such letters to insert his will into ESSA.

Next are the concerns of Sen. Mike Lee (R-UT), who focuses on King's time as education commissioner in New York City and how King made it clear that King has been politically placed and that King "leads" by forcing his will on stakeholders. Note also that Lee expects King to be like Duncan, who indicated that his lawyers could find a way around the limits on the US ed secretary in ESSA:

I have studied Dr. King's professional record, most notably his time in New York's Department of Education, and I've reviewed the transcript of his confirmation hearing. Based on the policies that he's supported, the bipartisan opposition he has invited throughout his career and his uncompromising commitment to the designs of bureaucrats and central planners over the lived experiences of parents and teachers, I believe it would be grave error for the Senate to confirm Dr. King's nomination at this time. Indeed, I believe it would be difficult for anyone to support Dr. King's nomination on the basis of his record.

The problem is not that Dr. King lacks experience; on paper, you might think that Secretary of Education is the logical next step in his career. After three years as a teacher and a brief stint managing charter schools, Dr. King has risen through the ranks of education bureaucracy, climbing from one political appointment to the next. But do we really think that someone who has spent more time in a government agency than in a classroom is better suited to oversee federal education policy. And, more to the point, what matters isn't the jobs that someone has held but the policies that person has advanced.

This, Mr. President, is the problem with Dr. King's nomination. Look closely at his record, especially, look closely at the three and a half years he spent as New York's education commissioner, where he forced on an unwilling school system unpopular Common Core curriculum and standards, an inflexible testing regime, and a flawed teacher evaluation system.

All of this proves that Dr. King is the standard-bearer of No Child Left Behind. ...

One of the most serious flaws of the ESSA... [is that] this is a model that concentrates authority... in the hands of federal politicians and bureaucrats.... And there is no government official who is granted more discretion or more authority under the ESSA than the US secretary of education. The ESSA purports to reduce the federal government's control over America's classrooms [by prohibiting, for example] the US secretary from controlling state education plans....

But when you look at the fine print, you see that in most cases, these prohibitions of federal overreach contain no enforcement mechanisms, only vague, aspirational statements encouraging the Secretary to limit his own powers.

So, the question is... would Dr. King adhere to the spirit of ESSA, and voluntarily return decision making authority to parents, teachers, and local officials? There's little reason to believe that he would.

In an interview with Politico, [Duncan] was asked, "How do you respond to the notion you've had your wings clipped on your way out the door?"

This was Duncan's response: "Candidly, our lawyers are smarter than many of the folks who are working on this bill." In other words, Congress can write whatever bill it wants, and the administration's lawyers will figure out a way to implement it according to the preferences of the Cabinet secretaries and their armies of bureaucrats.

This is certainly a brazen admission of bureaucratic arrogance by former Secretary Duncan, but it is exactly in line with the way that Dr. King approached his job as education commissioner of New York just a few years ago.

As Rankin and Lee note, there are weighty reasons to believe King will try to exert his will over state plans for ESSA Title I.

Still, Sen. Lamar Alexander (R-TN) believes the Senate will be able to hold King accountable. King will be in office for the final standardized testing season under the defunct NCLB waivers- and he will be in office as states compose their first state plans as the means of applying for Title I funds under ESSA.

Alexander's concern is not for the pressure King might put on states for high opt out numbers as April 2016 testing rolls around; it is for the implementation of ESSA- notably that states are not bullied by King into shaping Title I-related state accountability plans into King's preference. Nevertheless, I find it difficult to sympathize with Alexander, who insists that in ESSA, NCLB is "fixed," even as ESSA attempts to effectively stifle any local and state power over opting out of federally imposed, Title I testing.

In that case, King and Alexander would likely be two test-score-centered peas in a forget-opting-out pod.

And there is also ESSA's Title IV and its unbridled enthusiasm for under-regulated charter expansion- just as under-regulated as it was in NCLB. In the case of ESSA spending on charters, King is Alexander's man. After all, it was under King's watch that amazing fraud, Ted J. Morris, Jr., was approved to open a NY charter school (see here, also). Neither former NY Regents Chancellor Merryl Tisch nor King took the time to investigate Morris' fraud (which was easily detected using Google); as such, King in charge of doling out Title IV charter dough is on par with USDOE admitting that it did not thoroughly review Ohio's fraudulent and nationally-embarrassing charter situation before awarding Ohio up to $71 million as Duncan was preparing to exit USDOE.

All of this is to note that King has the makings of another Duncan, and on some points (e.g., ESSA Title I state plans), Alexander will want to use the Senate to rein King in. However, on other points (e.g., reckless charter spending; pressuring states to deliver on that 95 percent of test takers), King and Alexander will get on just fine.