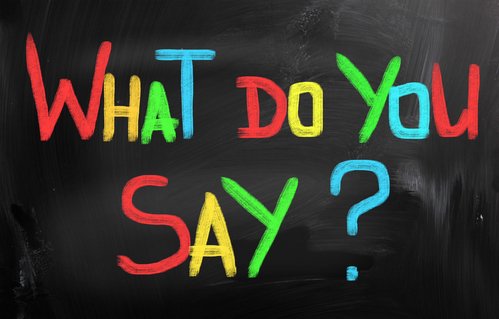 A few days before Christmas 2002, the same year that my father died and my mother hovered on the brink of a coma, my husband of 22 years looked across the living room at me and unceremoniously announced that he'd secretly lost every single penny of our savings, retirement and investment funds on a harebrained business venture... and that he was leaving me... to move across the country... to live with a former stripper... and her five children. Boom, Merry Christmas!

And, believe it or not, things actually went downhill from there. The fall of that first domino triggered a series of calamities that reduced nearly everything I held dear to rubble and set me reeling for the next decade. There was not one aspect of my life, from my finances to my family to my mental and physical health, that wasn't seriously bruised or battered during this period of prolonged crisis.

But, I survived -- yay! -- and I learned a few things about how words can help or hurt you to survive a difficult time. Here are a few of my tips about what to say -- and not say -- to support someone in crisis.

1. Do acknowledge that the person is dealing with an overwhelming situation. Give them a verbal pat on the back for handling hard and often unfair situations without giving up. Something just that simple, having another person acknowledge their struggle, can help people weather a terrible storm. For me, it wasn't that I wanted to wallow in self-pity or play the martyr, but I did need to know that I wasn't crazy for feeling overwhelmed by the sharp curve balls life had thrown me. Acknowledgement affirmed to me that I had legitimate cause to feel that way, and, interestingly enough, gave me the encouragement to persevere.

2. Don't simply ignore or minimize what someone is going through. It's amazing how many people tiptoe around the elephant in the room as if denying its existence will make it go away. Saying nothing may be easier for you, but it's not helpful to someone who desperately needs a word or two of support. Nothing was more hurtful to me than when people acted as if being faced with death, divorce, financial ruin and a protracted medical crisis -- without insurance -- all at the same time was no big deal.

3. Do sympathize and/or empathize. If what someone else is going through is completely out of your realm of experience, you don't have to pretend that you have been in their shoes. A sincere expression of sympathy is perfectly appropriate. It can be as basic as, "I'm so sorry you are having a rough time." And if you want to tack on, "It's not fair and it really sucks," that's even better!

If you have faced similar circumstances, share that. In the midst of what seemed like everyone else's perfect -- or at least normal -- lives, I felt so alone and even ashamed of what was going on in my mine. It sometimes felt as if I were being singled out or that the disasters befalling me were punishment for being a bad person -- yes, I was raised Catholic! I will forever be indebted to a co-worker who told me at my lowest point that she, too, had been through some desperate times in the past that not many people knew about. When she told me I would somehow make it through as she had, I no longer felt like a leper. She pulled me back inside the circle and gave me some hope to hold onto.

4. Don't pity or patronize. There is a world of difference, and believe me I knew it when I heard it, between sympathy and pity. It's one thing to think, "Oh, you poor, pathetic thing, I'm so glad I'm not you," but quite another to say it to the face of the person in crisis. Please don't offer "encouragement" from a position of superiority or act as if you are immune to fortune turning against you. Someone actually said to me, "I've led such a charmed life that I can't imagine how awful it would be to be living yours. Aren't you brave!" That was her version of the milk of human kindness. Ha! It wasn't even the skim milk of human kindness. And, by the way, I never thought I would be living my life as it was then either, so no one should get too smug. Anyone's circumstances could change in a snap.

If you are experiencing a difficult time in your life right now, know that you really can come out on the other side of it. It may take more time, sacrifice and patience than you think you can muster, but trust me, you are stronger and more resilient than you know. It took me 10 years to fully bounce back -- apparently, I'm a slow bouncer -- but I did it, and you can, too!

What words of wisdom or comfort from others have helped you through a crisis?