Anyone who knows me knows there are very few things I love as much as the fall theater season. There is a ton of new theater, but it's not as cramped and competitive as the spring.

Of course, the season has already crowned one giant hit, Hamilton, 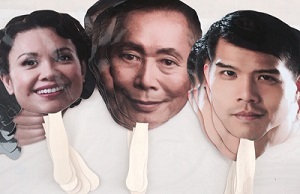 that will inevitably define it. But there is still much to come. Lea Salonga--one of my very favorite Broadway stars--is returning to the New York stage. (On the right there is a photo I snapped at the BC/EFA Flea Market of fans made of her face and the face of Allegiance costars George Takei and Telly Leung. On the back of them, they say: "I'm a [insert person here] fan." And indeed I am a Lea Salonga fan, so there you go. I don't support the hashtag on her fans, but I'm going to let that go for now.) Michael Arden--so wonderful onstage in musicals--is now a director, and his acclaimed production of Spring Awakening, incorporating American sign language, has just opened. Fiddler on the Roof, every Jewish mother's favorite show, is returning to Broadway with 5-time Tony nominee Danny Burstein in the lead role. The Roundabout Theatre Company is kicking off its big 50th anniversary season welcoming two British stars in their Broadway debuts, Clive Owen and Keira Knightley, in two different productions. Stars Bruce Willis and Jennifer Hudson are also making their Broadway debuts this fall. When I was young, I saw Sarah Jessica Parker play a dog in Sylvia off-Broadway. Now the show is back, with recent Tony winner Annaleigh Ashford in the title role and Matthew Broderick (SJP's hubby) and Julie White playing the pup's new owners. James Earl Jones and Cicely Tyson--two legends--return in The Gin Game. School of Rock and On Your Feet!, two big, bright, new Broadway musicals, are hitting the stage.

And there is so much more. I could talk about the fall season column after column, but rather than read my opinion, I decided to ask the producers of this fall's Broadway shows to tell you why you should see their shows. I gave them twenty words or less (excluding show title) to make their case. The below is what they came up with:

Ken Davenport on Spring Awakening, Opened September 27: "Arden's direction and the incorporation of ASL into Spring Awakening is like holding up a magnifying glass to the original."

Manhattan Theatre Club Artistic Director Lynne Meadow and Executive Producer Barry Grove on Fool for Love, Opening October 8: "An electrifying modern American classic about a couple who can't escape the intense hold they have on one another."

Bill Haber on The Gin Game, Opening October 14: "There ain't many Pulitzer-winning plays and there surely ain't many legends like our stars. It's a card game that fascinates."

The Producers of Dames at Sea on Dames at Sea, Opening October 22: "See DAMES AT SEA to escape into a world of tap dance and laughter,

a fun-filled celebration of movie musicals."

The Producers of On Your Feet! on On Your Feet!, Opening November 5: "On Your Feet! is full of passion, music, hope and, most importantly, life. All the same wonderful characteristics of the Estefans."

Andrew Lloyd Webber on School of Rock - The Musical, Opening December 6: "School of Rock resonates because music is a liberating and empowering force for kids. It's great fun with a really lovely story."

Also opening this fall are two London imports -- King Charles III (opening November 1) and A View From the Bridge (opening November 12). Broadway will additionally offer some limited engagement special events this fall: Lord of the Dance: Dangerous Games and The Illusionists - Live on Broadway. Both shows open in November.