When the teachers at a nearby public school district went on a contentious strike, second graders at Incarnate Word Academy, a National Blue Ribbon School in Parma Heights, Ohio, had plenty of questions for their teacher, Jill Nicklas Rolle: "What exactly is a strike?" "Why aren't the two sides getting along?" "Who can settle this big argument?"

Rolle, a veteran of 20 years in the classroom, knew exactly what to do. She pulled out the book
Click, Clack, Moo: Cows That Type
and read it to her class of two dozen seven-year-olds. By the end of the story, the kids had a pretty good sense of labor-management relations.

Then they had another question: "What's a typewriter?"

Click, Clack, Moo: Cows That Type -- authored by Doreen Cronin and illustrated by Betsy Lewin -- tells the story of a labor-management dispute between Farmer Brown and his resident bovines, who, upon finding an old typewriter in their barn, air their grievances in writing. The chickens follow their lead, and a strike ensues, leaving Farmer Brown with no milk or eggs. Eventually, through the mediation of a neutral duck, a compromise is reached and production resumes.

Rolle's been using Click, Clack, Moo: Cows That Type for the past five years in her classroom, mostly to teach reading. But she loves the positive messages the book conveys, and the kids love the book, too. "It teaches the value of working together for a common goal and to peacefully stand up for yourself," she told me. "I use it to introduce the concept of persuasive writing, as well as cause and effect."

The story is also a good way to explain playground politics. According to Rolle, the book "shows how important mediation, arbitration and neutrality is when it comes to disputes -- there is always an alternative." But in the end, she says, "What I think the children like best is how the animals outsmart Farmer Brown."

Based on enthusiastic support from the public, the title was recently added to the U.S. Department of Labor's list of Books that Shaped Work in America. It's got somewhat of a fan club, evidenced by the comments submitted to the Labor Department project. Here's just a sample:

"A great lesson for young people about the values of education and collective action in the work place in a hilarious story that adults will love too."

"Now a classic of children's literature, a great lesson on organizing and collective bargaining!"

"This is a great book on many levels: first, it is a funny children's book; then it is a book about co-operation, meeting needs, working together to gain respect in the workplace. A great first primer on unionism and collective action."

Click, Clack, Moo: Cows That Type has certainly made an impression since it was published in 2000. There is no doubt it is helping to shape an important aspect of work in America, and I'm hopeful that will continue for years to come. Because for work, workplaces and workers to thrive (not just survive) in our nation or anywhere in the world, we need to continue to grow generations of leaders who understand labor-management relations ... and most importantly, who will foster and utilize creative, "win-win" partnerships between labor and management.

Those types of relationships were on display just last month at "Partnerships that Work," a White House labor and management summit. 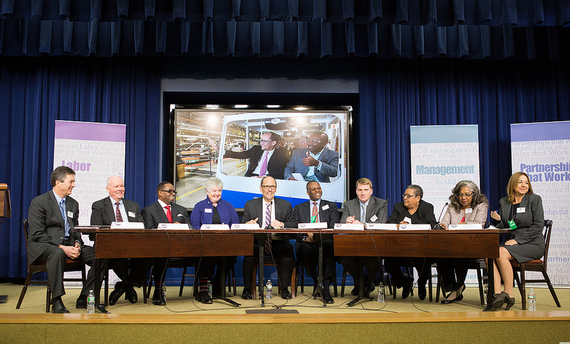 Representatives from the Walt Disney Co., the Building and Construction Trades Department of the AFL-CIO, the Ford Motor Co. and the United Auto Workers, among others, joined Labor Secretary Thomas E. Perez, Commerce Secretary Penny Pritzker and Federal Mediation & Conciliation Service Director George H. Cohen in a series of fascinating discussions on best practices and emerging innovations in the workplace. Every session showed the amazing success that results when employers and unions collaborate to achieve a common goal.

Farmer Brown, along with his cows and chickens, would have learned a lot.

The public is invited to expand the ever-evolving Books that Shaped Work in America list. Suggest a book using this simple online form.