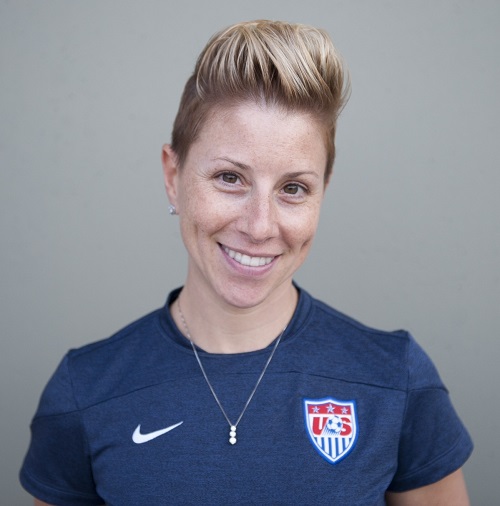 With more eyes (and tweets) on soccer than just about ever before, it's only natural to wonder how the players do what they do. We spoke with team dietitian and Academy of Nutrition and Dietetics member Danielle LaFata, RD, a board-certified sports dietitian, about what it takes to fuel Team USA.

Had you worked with many soccer players before head coach Juergen Klinsmann asked you to be the team dietitian? What was different about working with them?
I had worked with a few -- but soccer players are different. Every sport has its characteristics. I don't think many people realize -- at least, I didn't until working with them one on one -- they're very similar to body composition athletes. They want to make sure they're lean all the time, and they don't want to have a heavy stomach from food or water, but at the same time, they need enough water or fuel to get them through the game.

Having [a dietitian] there on a daily basis was foreign to them. I spent a lot of time trying to find out what their food habits were so I could meet them in the middle. Some have tried eating more before getting on the pitch and it's worked for them. For others, we try to find other ways to circumvent that, like more small meals throughout the day or eating more at halftime.

What do they eat at halftime?
I'll have certain bars they can snack on, water and of course maybe a little bit of a sports drink or some chews or gels.

How much water do the players typically drink a day?
I go with the rule of half an ounce to one ounce of fluid per pound of bodyweight per day, so a 170-pound athlete would have around 10 16-ounce bottles of water. They all know what their minimum is, and it's total fluid, so they can count some of their coffee or sports drinks. A few of them we weigh before and after training sessions to get a rough estimate of how much [fluid] they're losing. Some of them are just real heavy sweaters, so we'll play with salts throughout the day. If they don't want to drink more water, I tell them to eat more fruits and vegetables.

Do those heavy sweaters have individualized compositions of sports drink?
I know some teams are doing that, and at some point I would like to get there. I would like to see if it could get a bump in their game.

What are some favorite meals for after the game?
The favorite post-game meal is fajitas. I might have a carving station. They eat three or four hours after a game, and I try to follow what we call the 80-20 rule. Eighty percent of the time it's clean and healthy, and 20 percent of the time it's the fun foods. Sometimes we'll have pizzas with grilled chicken. Sometimes Juergen is even healthier than I am, I think! And that's why I'm here, because he's a huge proponent of nutrition. We hired a chef in January so I work with him, but before I had to work with hotel chefs to make meals leaner, without a ton of oil, low-fat sour cream, whole-grain tortillas. Hiring a chef with my same visions has cut back on all my explaining.

And what about meals before the game?
When I first started working with the team, the captains told me they didn't want to mess with the pre-game meal. Three to four hours before the game they'll have simple, basic foods, like grilled chicken or fish, brown or white rice, a baked potato bar, grilled vegetables, salad bar, yogurt, granola, nuts, dried fruit, fresh fruit. I'll have the hotel cut fruit that's in season because if it's cut [the players] will eat more of it. I always make sure I have food on me for a snack one to two hours before kickoff, like sandwiches, bars and more sliced fruit.

How many calories does the average player need throughout the day?
For our guys and their weight and height it's around 3,400 calories a day on training days. So game day, you'd probably add -- based on some soccer studies and case studies I've seen -- maybe 500 to 1,000 calories, especially for the guys who play the full 90 minutes. They get hungry about every two to two-and-a-half hours.

How has the heat and humidity affected your eating and drinking plans?
Our [2013 Concacaf] Gold Cup in July was way more hot than what we've been noticing now. We've been able to be OK with the heat and humidity. Half our guys are from the MLS, so they're used to long travel and weather. It's the European guys I try to pay a little more attention to and get them to buy in to me pushing water down their throats every day. Playing in Germany, they're not used to this heat and humidity.

I'm not saying it's all nutrition or all hydration, but it's definitely a part of the picture.

This interview has been edited and condensed. As told to Sarah Klein. Photo courtesy of the Academy of Nutrition and Dietetics.