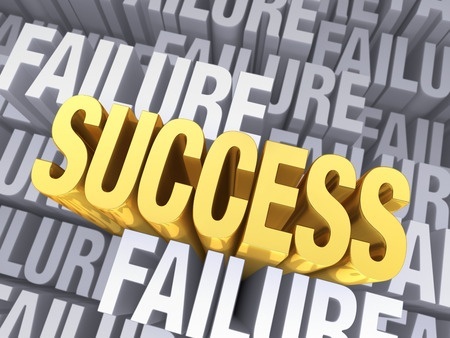 What does Johnny's failed at bat have to do with success?

Everything, depending on what Johnny does with his failure.

How we fail, how we perceive our failures and perhaps, most importantly, how we respond to them (the actions we take following our failures) will determine how successful we are in business and life.

The most successful people in history have failed. They've failed epically, miserably and repeatedly.

Yet we tend to see successful people and erroneously think they have the Midas touch, that is, everything they touch turns to gold. Nothing could be further from the truth!

Warren Buffet, Sir Richard Branson & Elon Musk all know failure is a mandatory prerequisite for success. If you were to ask these men to name what was most critical to their success, they would resoundingly tell you had they not experienced their failures, they would have not achieved their future successes. Their success was rooted in failures.

Following Warren Buffett's initial purchase of Berkshire Hathaway, the company proceeded to consistently lose millions of dollars for years. Fast forward and we all know Berkshire Hathaway is considered to be one of the most successful companies -- ever!

Branson states: "Do not be embarrassed by your failures, learn from them and start again."

This past summer Elon Musk's company SpaceX watched its Falcon 9 rocket break apart shortly after launch. This launch was an epic failure.

Following the failed launch, Musk stated that due to the company's past successes, a culture of complacency had set in. Musk stated that having experienced such an epic failure, his company will become better and stronger due to increased vigilance and new parameters that would be established to avoid future disasters.

Click here to read more about the SpaceX Falcon 9 rocket explosion after launch.

"Failure is success if we learn from it."
Malcolm Forbes

4 Reasons Why Failure is a Prerequisite for Success

1. Failure is a prerequisite for success because it builds character. When you experience failure, you have one of two options. You can throw in the towel, quit (and perhaps blame others) for your failure. Or you can choose to learn from the experience. Choosing to learn from your failures will increase your resiliency, help you gain confidence and ultimately build character.

2. Failure is a prerequisite for success because it forces you out of your comfort zone to face new challenges that stretch your mind and capabilities. Failing compels us to think outside "our" box and seek solutions from angles and perspectives we might not have normally pursued. Failure forces us to look at ourselves through a harsh realistic lens and ask ourselves difficult questions: "What went wrong?" "what do I need to do differently?" "how can I improve on this situation next time?"

3. Failure is a prerequisite for success because it increases self-esteem, without which one cannot succeed. Of course it is difficult to pick yourself up after being knocked down. However, each time you do so your self-esteem increases because you've proven to yourself that you can overcome adversity. This is why today's parents not allowing their children to fail, in fact, sets them up for a lifetime of failure as adults (but that is a blog topic for another day).

4. Failure is a prerequisite for success because it is our most powerful teaching tool. Once a failure has been examined and explored, it provides us with a golden opportunity to develop and learn new skills that one didn't have prior to the failure.

We learn far more from our failures than we will ever learn from our successes. Success makes us feel good and reinforces our strengths. Failure highlights our weaknesses and provides us with the invaluable opportunity to minimize them -- and most importantly, learn from them.

Remember, absolutely no one has ever achieved success in life without failing.

Consider your failures to be the pathway for your future successes.

Can you think of a time when your failure brought you future success?

Amazon best selling author of: Not Tonight Dear, I've Got a Business to Run!