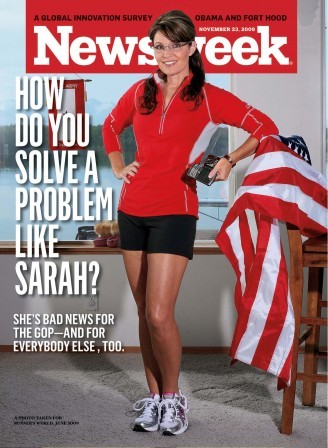 This has got to be the worst case of pictorial sexism aimed at political character assassination ever done by a traditional media outlet. After being on the primary front lines of what happened to Hillary Clinton in 2008, that's saying something. Newsweek seems bent on destroying a prominent Republican political star, not on the basis of her politics, which I disagree with on every level, but by depicting her as a sex symbol, which automatically means she can't possibly have leadership chops, or in this case, can't write a bestselling book setting the record straight as she sees it.

Oh, and by the way, for all you fact checking fanatics, the people behind Sarah don't care, aren't listening, don't trust the criticism. Norah O'Donnell was in Michigan, another battleground state on Sarah Palin's Going Rogue tour, to see first hand the evidence. Here's a very rough transcript of part of what she said today on MSNBC:

This is a line that stretches all the way back... another 1,000 people to see Sarah... It's 9:00 o'clock in the morning and she's not here until 6:00 pm tonight.... [...] You know what it is? It's a connection. ... Palin says she's treated unfairly, treated unfairly by the media, by Newsweek magazine ...and the people in middle America feel treated.. unfairly.
- Norah O'Donnell

Given the latest polls on independents, Democrats should understand they've not only got big problems, but that the emotion people feel about their plight has found a champion that has tapped into their outrage. Dangerous stuff, this.

But seriously, what were they thinking? Evan Thomas has the Sarah Going Rogue article, with the comments on the cover priceless. As for Newsweek editor Jon Meacham, he has to be the most clueless man on planet earth.

We chose the most interesting image available to us to illustrate the theme of the cover, which is what we always try to do. We apply the same test to photographs of any public figure, male or female: does the image convey what we are saying? That is a gender-neutral standard.
- Jon Meacham, Editor of Newsweek

Oh, good grief. No thinking man should be caught writing such drivel in the 21st century, let alone a man editing a major traditional newsweekly. If I had a subscription to Newsweek I'd cancel it. And I'm a liberal.

But on the other side, what was she thinking? Talk about serving up a soft ball for your haters. It's sad, but that's just how careful women have to be. If Sarah Palin wants to be taken seriously she simply doesn't have the luxury of offering this type of image. Though the backlash against the media may prove worth it for Palin.

Since Palin posed for the photo in a profile about "health and fitness," it doesn't take a genius to get that photographing Palin as she exercised isn't what Runner's World or Sarah Palin preferred. If Newsweek wanted to feature the shot questioning why Sarah Palin thinks she can be taken seriously with this type of publicity as platform, well, that's another story entirely. Questioning her choice to offer a semi-cheesecake shot for Runner's World, when the article was about "health and fitness," is one thing. But using the photo with the header they chose is something else.

Continuing the stereotype that good looking women are airheads, with Sarah Palin now the poster girl. Oh, and by the way, I also don't buy the argument that middle age women who have the gift of genealogy and have kept fit wouldn't also show off their bodies given the right moment. It's just few women of a certain age have that luxury, because they just don't have the body, though that shouldn't bring out the claws. However, jealousy always rears its head when beautiful women are in the mix.

The choice of photo for the cover of this week's Newsweek is unfortunate. When it comes to Sarah Palin, this "news" magazine has relished focusing on the irrelevant rather than the relevant. The Runner's World magazine one-page profile for which this photo was taken was all about health and fitness - a subject to which I am devoted and which is critically important to this nation. The out-of-context Newsweek approach is sexist and oh-so-expected by now. If anyone can learn anything from it: it shows why you shouldn't judge a book by its cover, gender, or color of skin. The media will do anything to draw attention - even if out of context. - Sarah Palin

The Newsweek cover insult goes along with the emails I'm getting. So many people spewing such hate over Sarah that I've simply stopped talking about her in casual conversations, especially with liberals. They've lost their sanity over Sarah.

But if you want to embolden women to stand behind Sarah to spite everyone, going down the Newsweek road is one way to do it.

No one knows if she'll ever run again for office, whether it's 2012 or beyond. Though I will say after Oprah and her other interviews I think the chances remain high she will. It won't be easy for her, especially once slick Mitt Romney strides back on to the national scene with his economic message and crisp, clean image ready for a very desperate Republican electorate.

But again, there is no evidence anyone can tap into the emotion people on the right are feeling like Sarah Palin.

Nothing changes the reality that the traditional media doesn't know how to handle her, with liberals being even worse. Blatant sexism certainly isn't the way, offering magazine covers that no man would ever have to endure. Sure, Barack Obama was seen in the surf, in a swimsuit, bare chested, but it certainly isn't something Newsweek would have offered while he ran for office, let alone as a politician hawking a bestselling book.

At least we know how low Newsweek will go.

An example of how powerful women are still treated in this country, especially in the political arena. Peggy Noonan and others often point to Golda Meir and Margaret Thatcher as examples of female leaders who used their gender and didn't complain about the press coverage they received. Neither of these women had to face the American press.

UPDATE: Just received an email from HuffPost reader JoeF. (Thanks, by the way!) Turns out Runners World didn't give Newsweek permission, as there is a one year hold on the photo:

EDITOR'S NOTE: On the cover of this week's issue of Newsweek is a photo that was shot exclusively for the August 2009 issue of Runner's World, in which Sarah Palin was featured on the monthly "I'm a Runner" back page. The photos from that shoot are still under a one-year embargo, and Runner's World did not provide Newsweek with its cover image. It was provided to Newsweek by the photographer's stock agency, without Runner's World's knowledge or permission.